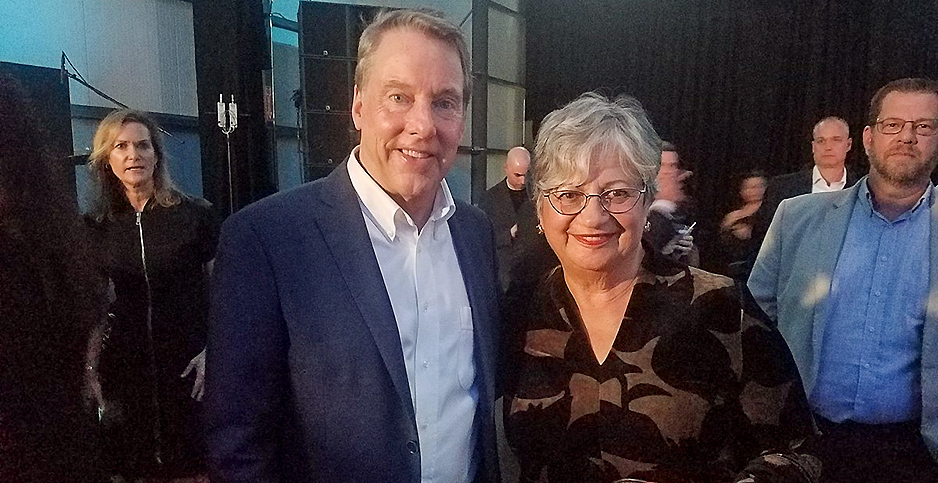 California Air Resources Board Chair Mary Nichols is pictured with Bill Ford, executive chairman of Ford Motor Co., at the unveiling of the all-electric Mustang Mach-E in November 2019. @MaryNicholsCA/Twitter

California yesterday adopted the first regulation in the world aimed at boosting sales of zero-emission trucks, marking a milestone in the history of regulating pollution from motor vehicles.

The California Air Resources Board’s unanimous vote capped a marathon seven-hour Zoom meeting at which more than 130 people signed up to testify. The meeting was held in a virtual format due to concerns about the coronavirus pandemic.

Dialing in, the vast majority of speakers voiced strong support for the Advanced Clean Trucks Regulation, which would require truck manufacturers to sell a certain percentage of zero-emission trucks in the state starting in 2024.

The stringency of the requirements would gradually increase each year, with the goal of putting 300,000 electric trucks on California’s roads by 2035 and phasing out diesel trucks by 2045 (Climatewire, April 30).

California has long led the nation in setting new environmental standards, and a coalition of Northeastern states has already signaled plans to adopt the rule. The final outcome of that effort hinges on the Trump administration.

The rule’s environmental benefits in California alone could be enormous. Heavy-duty trucks are responsible for a third of California’s smog-causing nitrogen oxides (NOx) pollution and a fifth of its greenhouse gases.

According to recent research from Energy Innovation and the Environmental Defense Fund, the rule could prevent 17.6 million metric tons of carbon dioxide and 60,000 tons of NOx from entering the atmosphere through 2040 (Climatewire, June 17).

The vote represented a long-sought victory for environmental justice groups.

For years, those groups have called on the Air Resources Board to better protect residents of "diesel death zones," or areas where thousands of polluting diesel trucks rumble through each day. Many of those areas are clustered in low-income communities and communities of color.

"We have some of the worst air quality in the nation, and that’s because of the ozone pollution that largely comes from diesel trucks," Anthony Victoria-Midence, a resident of San Bernardino and a spokesman for the Center for Community Action and Environmental Justice, said in a phone interview after the board meeting.

"It’s leading to generations of families suffering from all kinds of illnesses, like asthma and cancer," Victoria-Midence said. "That’s why these things need to be addressed now, and the best way to do that is by moving forward a strong Advanced Clean Trucks rule."

In approving the rule, the board rejected some demands by both environmental justice and industry groups.

Some environmental justice advocates had asked the board to increase sales targets for the heavy-duty trucks — known as Class 7 and Class 8 trucks — that haul goods along Interstate 710.

"Around 40,000 to 60,000 truck trips occur every day on the 710 freeway, and this pollution manifests itself in asthma, cancer and other illnesses that my family and my neighbors are enduring," testified Cindy Donis, an organizer for East Side Communities for Environmental Justice.

"We’re also in the midst of a health crisis and a pandemic that has shown us that if we keep denying clean air for low-income communities of color … we’re setting ourselves up to be much more vulnerable to COVID and other illnesses," Donis added.

Conversely, some industry groups had urged the board to delay the rule’s implementation because of the economic hardship imposed by the pandemic.

Jed Mandel, president of the Truck & Engine Manufacturers Association, said pushing back implementation to 2026 would give the state and industry time to recover from the financial downturn.

Other groups representing the natural gas industry — including Natural Gas Vehicles for America and Southern California Gas Co. — mounted an unsuccessful push for the rule to include low-NOx natural gas vehicles in its definition of low-emission vehicles.

CARB Chair Mary Nichols appeared skeptical of this push, saying, "This rule is intended to be a zero-emission rule. … That’s not what this rule is about."

On the other side of the country, Northeastern states have signaled that they plan to adopt the rule, just as they have already adopted California’s greenhouse gas emissions standards for passenger cars.

In December, seven Northeastern states and the District of Columbia released a statement indicating they would follow in the Golden State’s footsteps on truck electrification.

The statement was organized by Northeast States for Coordinated Air Use Management, a regional nonprofit association of eight state air quality agencies.

Paul Miller, executive director of NESCAUM, testified yesterday that the rule would provide a crucial mechanism for curbing ozone, a precursor to smog formation.

That sentiment was echoed by Katie Dykes, commissioner of the Connecticut Department of Energy and Environmental Protection.

"The transportation sector in Connecticut is responsible for approximately 70% of smog-forming air pollution and 38% of greenhouse gas emissions," Dykes said. "Connecticut fails to meet the National Ambient Air Quality Standards for ozone, and every day we exceed these standards represents very real and tangible health impacts."

Before the rule takes effect in 2024, a potential hurdle lies in the way: the Trump administration.

Under the Clean Air Act, California can apply for a waiver from EPA to set stricter vehicle emissions standards than those of the federal government. If the waiver is granted, other states can choose to adopt California’s more protective standards.

Since the 1970 passage of the bedrock environmental law, both Democratic and Republican administrations have consistently granted the Golden State such waivers.

Under President Trump, however, EPA revoked California’s waiver as part of its broader rollback of President Obama’s clean car standards.

Environmentalists fear that EPA could take the same action with respect to heavy-duty trucks, rather than passenger cars, Paul Cort, a staff attorney at Earthjustice, said in a phone interview after the meeting.

"I’m sure the Trump administration, if they are still in the White House next year, would try to throw something in the way of this. But I think they would be very hard-pressed to justify it," Cort said.

"This really is a big rule, and I’m very excited to get this one in the books and move on," he added.