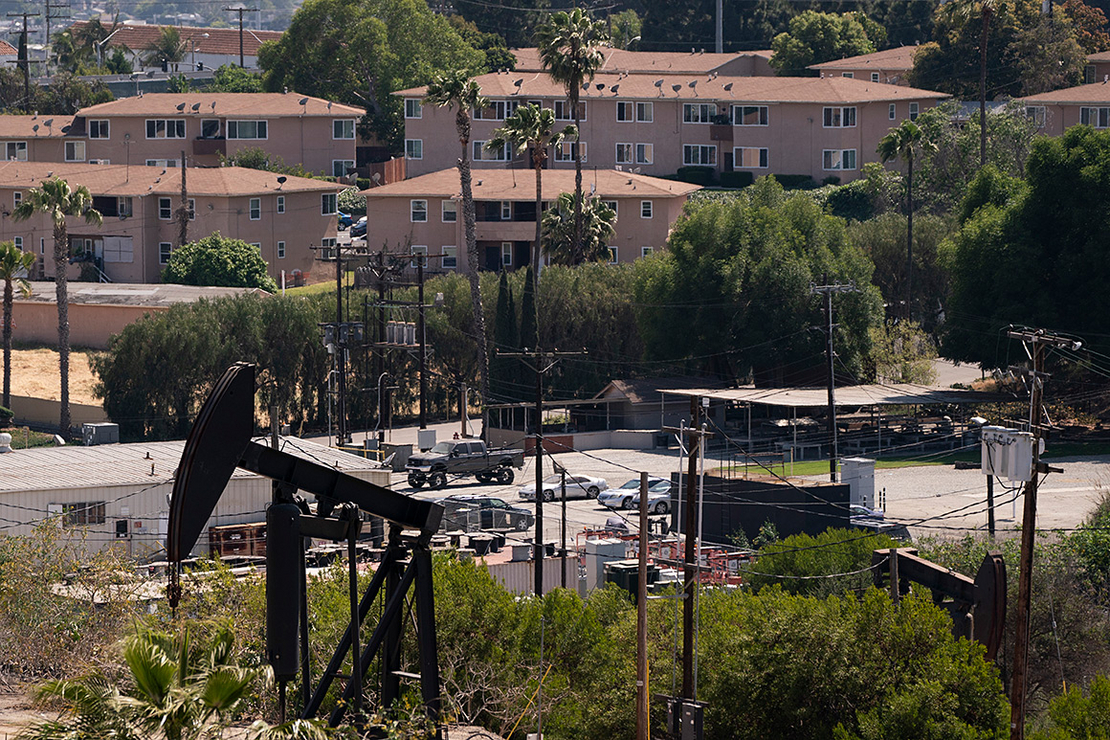 Apartments are seen behind pumpjacks operating at the Inglewood Oil Field in Los Angeles in May. California is seeking a ban on new oil wells near schools and other neighborhood sites. Jae C. Hong/AP Photo

The state’s Geologic Energy Management Division (CalGEM) issued a draft rule prohibiting wells within 3,200 feet of sensitive locations. The Democratic governor announced the move in Wilmington, a Los Angeles suburb with many oil drilling sites and residents with low incomes.

CalGEM plans to take comments on the draft rule and issue a final rule in the coming months.

Newsom’s office promoted it as part of his broader plan to curtail oil and gas use in the Golden State. Newsom in an executive order last year banned the sale of new gas-fueled passenger vehicles after 2035, and a similar move for gas- and diesel-fueled trucks after 2045.

Environmental and community groups have for years pushed for the buffer rule blocking oil and gas wells near homes. Those groups praised the move.

"Today’s announcement represents years of work by environmental justice advocates to put public health first after over a century of prioritizing oil company profits above health and safety, ” Martha Dina Argüello, executive director of Physicians for Social Responsibility-Los Angeles, said in a statement. “We know there is no safe distance for oil and gas drilling, but until we phase out all drilling our communities will continue to be at risk from day-to-day operations and the continuous threat of catastrophic accidents like we saw in Orange County."

She referred to the recent oil spill in Huntington Beach, which came from a leak in an offshore well.

The oil industry criticized the planned regulation as a costly decision.

“Just a few weeks ago, President Biden asked the OPEC nations, such as Saudi Arabia, Iran, Iraq and Venezuela, specifically, to produce more oil in order to bring energy costs down and ensure reliability," Catherine Reheis-Boyd, president and CEO of Western States Petroleum Association, said in a statement. "Today, Governor Newsom took an opposing path and proposed a setback regulation that could lead to increased costs and reduce the reliability of our energy supply. His decision was not based on what is best for Californians or science."

She added that the proposed rule would hurt "California’s families, workers and businesses that need affordable, reliable energy every day."

"It’s time we call these series of actions, bans, rules and mandates what they are: an activist assault on California’s way of life, economy and people," Reheis-Boyd said.