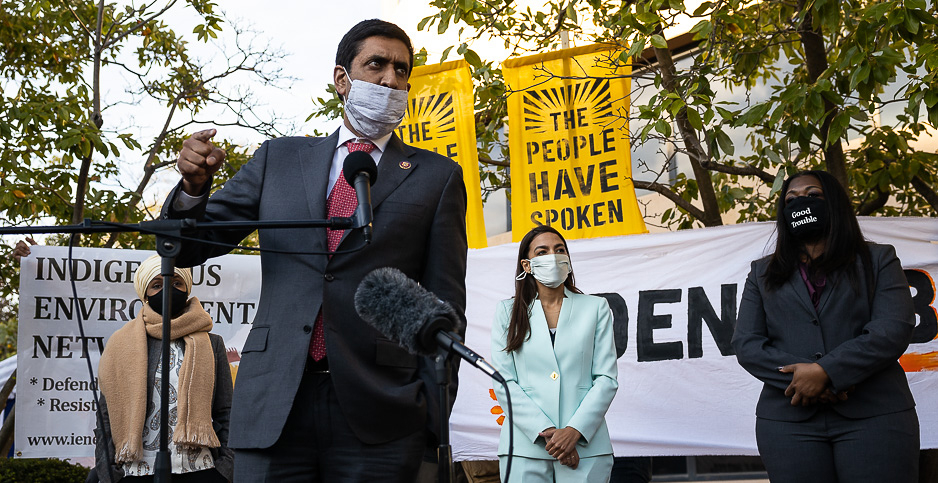 California Democrat Ro Khanna is taking the helm of the House Oversight and Reform Subcommittee on Environment, offering both progressive climate ambitions and pragmatic sensibilities to a panel charged with scrutinizing environmental agencies and the energy industry.

The congressman represents the Silicon Valley area and, in just a few years in Congress, his national reputation has grown to "lion size," to borrow a phrase from Sen. Cory Booker (D-N.J.).

"You’re one of these people who hits this place with an impact that is really amazing," Booker told Khanna during a 2019 Facebook interview.

The Californian has managed to create an image that blends both a fight-the-establishment mentality and deep roots in the Democratic Party (E&E Daily, Feb. 1, 2019).

"He thinks in big, bold ‘where do we want to go,’ but he thinks in very practical terms," said Sean McElwee, executive director of the progressive group Data for Progress.

Khanna labels himself a "progressive capitalist," pointing to the likes of Sen. Elizabeth Warren (D-Mass.), and he wrote a book on bringing manufacturing back to the United States.

He was an early backer of Sen. Bernie Sanders’ (I-Vt.) presidential campaign and now plans to use his new platform to carry out the aspirations of the Green New Deal.

Khanna elaborated on his oversight agenda, working with Republicans and scrutinizing the private sector during an interview with E&E News this week.

What are your goals for the subcommittee?

The first priority is going to be climate. The first hearing will likely be on climate disinformation — the role that social media and other platforms have spread disinformation. If we can’t get to the truth on climate, how are we going to solve it?

One of the focuses will be on the epistemic problem of understanding the seriousness of the problem — the short time we have to act, and what we have to do, and how do we get science to better understand.

The second focus will be about how to deliver clean jobs. These jobs are going to first be in left-behind communities.

So it’s going to be about job creation and showing West Virginia and Butler, Pa., that these jobs are going to be there.

The third part will be a focus on environmental racism. I led the "Last Chance" campaign in California to stop new permitting of fossil fuels, but also to have residential barriers of 2,500 feet where drilling could take place near residential communities. And then getting rid of fossil fuel subsidies.

Do you plan to work with Republicans? How so?

One other area, I think, is paying farmers for regenerative agriculture. Farmers are great stewards of the land, and that is something that Republicans represent.

Republicans have a lot of farmers in their districts and understand that farmers care deeply about the environment, but they want to be agents. They don’t want to be lectured at. They know how to be part of the solution.

Have you seen a shift in attitude among Republican members?

So much of this is about language. Republican members of Congress say, "We believe in the stewardship of the land. We believe in protecting our environment, keeping the air clean. We believe in conservation."

The question is, how do you engage in a way that can find common ground? The language of the two sides is very different. There is a need to figure out how to talk to each other in ways that can build consensus on certain policies.

Do you have ideas about how to do that?

One thing is paying farmers for environmental services. That’s just one idea. Reindustrializing America, because that is going to make us competitive in the 21st century.

How do you engage people on environmental issues?

The challenge is, how do we create democratic forums that take people’s aspirations in local communities and make them agents to offer their solutions about climate change?

In his first weeks in office, President Biden has issued several climate- and environment-related executive orders. What’s your assessment?

I think they are off to a very strong start. The administration has stopped the [Keystone XL] pipeline as they said they would.

They are restoring the role of EPA regulations, and I think they will probably end up restoring the Clean Power Plan that was at the end of the Obama administration.

How do you think the administration should balance building out renewable energy with rewriting environmental permitting under the National Environmental Policy Act rules?

I think we need to certainly make solar and wind possible and make transmission lines, but they need to take into account the communities that are impacted. You can’t have me sitting in Washington or the administration without the feedback of those locally impacted communities.

Any other plans to focus on the private sector?

Absolutely. We are going to be scrutinizing the roles they may have had, including in residential neighborhoods in causing cancer, on PFAS, clean water and clean air. That will definitely be part of our efforts.

How do you think the administration should go about negotiating with the energy industry while pursuing aggressive climate policies?

First, there has to be a reckoning with oil companies or energy companies and transparency. Obviously, these companies in certain cases were not transparent about data, about the impacts of climate change. That all has to be accounted for.

But moving beyond that, we need to make sure they diversify and move beyond oil and gas activities. You see the movement of the financial firms like BlackRock saying they are not going to invest in fossil fuels.

One thing that would be interesting would be if you required companies to disclose their climate risk in the financial disclosures. I think that might lead to people being more willing to take steps of diversification.

I know you are a big backer of the Green New Deal. Do you see the subcommittee as a way to further its goals?

I do. I see the new deal as an aspirational vision of what we want. We want a nation where we are working toward 100% clean energy, low emissions, communities that have good employment.

But the question is, how do you get there? I think this committee will be focused on the how. I see the Green New Deal as an aspirational vision, and I see the committee’s job as the nuts and bolts of the functioning of government.

Is there anything on the regulatory side you think Biden should prioritize?

I thought the Clean Power Plan was actually very strong start toward getting toward zero emissions from at least the utility sector. So I would start there.

We can build on that, obviously. But from a regulatory standpoint, I thought that was well done, and if we could get some of that back in place.

Do you support a price on carbon?

I support a carbon tax that is structured in a way that doesn’t directly impact working families. I wouldn’t put a tax on gas. I would tax the polluters. It would force people to pay for an externality that is fair and further incentivize the green clean energy market.

How do you think the media should be covering these issues?

I think the media focus is so much on the science, and they miss the human element of the dispute. I think they focus it on "Here is the regulation. Here is the science. Here is what the experts say."

And I don’t think that’s what’s going to bring about change on climate. It’s not just "Let’s surround ourselves with the smartest, [and] we’re going to have a solution."

I would have reporting in Butler, Pa., or West Virginia. How are they thinking about climate change? What are the concerns? Is it really a dispute about the science, or is it really a concern about livelihoods and jobs? Is it a difference in risk assessment? What is the real differences in this country, and how do we bridge that?

We don’t go a level deeper, and it’s easy to say, "Oh, they are anti-science, and they say, ‘No, they are talking to experts we don’t believe in.’" If I were a journalist, I would focus on some of those questions.