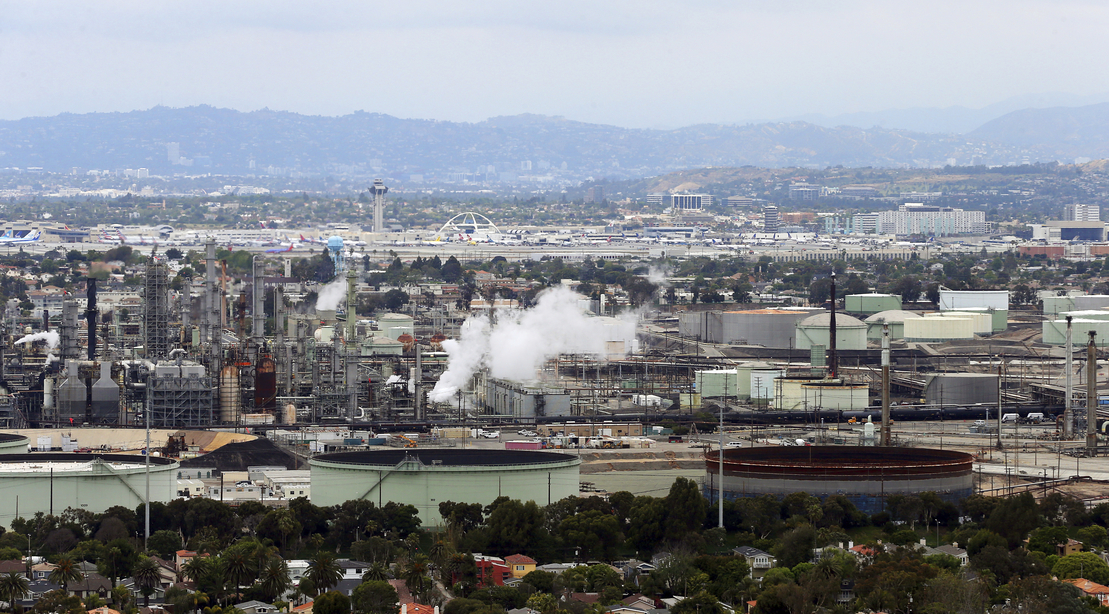 The Standard Oil Refinery in El Segundo, Calif., with Los Angeles International Airport in the background and the El Porto neighborhood of Manhattan Beach, Calif., in the foreground in 2017. Reed Saxon/AP Photo

California regulators passed a sweeping plan Thursday to achieve a zero-carbon economy by 2045, largely through phasing out oil use, deploying carbon capture and converting homes to electric appliances.

The updated “scoping plan” approved by the California Air Resources Board does not enact any new regulations. The agency will need to pass a series of rules to achieve parts of it. In some cases, other California agencies will need to approve the recommended regulations. An interagency task force, for example, would coordinate and plan the phase-down of oil extraction and refining under the CARB blueprint.

“We are making history here in California,” Democratic Gov. Gavin Newsom said in a statement after CARB unanimously passed the plan. “California is leading the world’s most significant economic transformation since the Industrial Revolution — we’re cutting pollution, turning the page on fossil fuels and creating millions of new jobs.”

The nation’s most populous state sees itself as a leader in fighting climate change, and the scoping plan lays out the pathway for achieving California mandates. Getting to economywide carbon neutrality by 2045 is state law.

At the same time, regulators acknowledged that the Golden State’s greenhouse gas emissions are a small part of the global problem.

“The most important benefit of this is that we are a model for the rest of the world, that’s going to be extrapolated, imitated,” CARB member Dan Sperling said at the hearing. “We are 1 percent of the [emissions] problem. We could go to zero, and it would make no difference on climate change.”

The plan sets out various goals, including cutting greenhouse gas emissions by 48 percent by 2030 compared with 1990 levels. That exceeds the state’s mandate of a 40 percent reduction.

The blueprint also aims to slash emissions 85 percent by 2045, including by cutting oil and natural gas consumption by 86 percent by that same year.

But in the past, the state has failed to cut vehicle miles traveled.

“I like the ambition and the appendix supporting it, but I want CARB and legislators to put the weight behind it that it needs to succeed,” David Weiskopf, senior policy adviser at NextGen Policy, said in an email. “We can’t do what CARB says we need to do without it, but right now not nearly enough advocates or (government) officials are prioritizing it.”

CARB included several provisions in the final scoping plan that were not in an earlier draft. Those include a commitment for the state to not build any new natural gas-fired power plants, phase down the use of existing gas plants and use 20 gigawatts of offshore wind by 2045.

“This is the tension at the heart of all advocacy around the scoping plan,” Weiskopf said. “CARB isn’t regulating here and has to model things it can’t regulate in some instances. One could imagine pathways to preventing new gas builds at CARB, but yeah, CEC and CPUC are the main authorities here.”

The plan seeks to cut natural gas use by making more homes all electric. It would do that by making 80 percent of appliance sales electric by 2030, with the goal of putting 6 million heat pumps in homes and commercial buildings. All appliance sales would be electric in 2035 under the plan.

There’s also a commitment to scrutinize the state’s carbon cap-and-trade market. CARB will look at how many permits — or “allowances” — for carbon emissions are issued under the plan.

“We’ve been advocating for this for the last year-plus — the emissions cap is essential to meeting climate goals and it needs to be more stringent,” said Katelyn Roedner Sutter, California state director at the Environmental Defense Fund.

The plan also relies on using carbon capture and sequestration (CCS) on the majority of petroleum refining operations by 2030. It also would use CCS on all stone, clay, glass and cement factories by 2045.

Numerous people criticized the heavy reliance on CCS at Thursday’s board meeting, pointing out that many of the plants are located in communities with lower-income residents and people of color.

“Our medical and scientific partners from around the country and the world continue to remind us of the significant health and safety threats presented by capture, transport and storage phases of this process,” said Eric Romann, director of strategy and campaigns at Physicians for Social Responsibility, Los Angeles.

There’s a threat of leaks and catastrophic accidents, he said, and the likelihood that carbon capture “will extend the life of industries and facilities that already pollute the air and poison the water and land” in disadvantaged communities.

New legislation passed this year, S.B. 905, mandates that CARB create a program to evaluate the efficacy, safety and viability of carbon capture and utilization or storage, and carbon dioxide removal technologies.