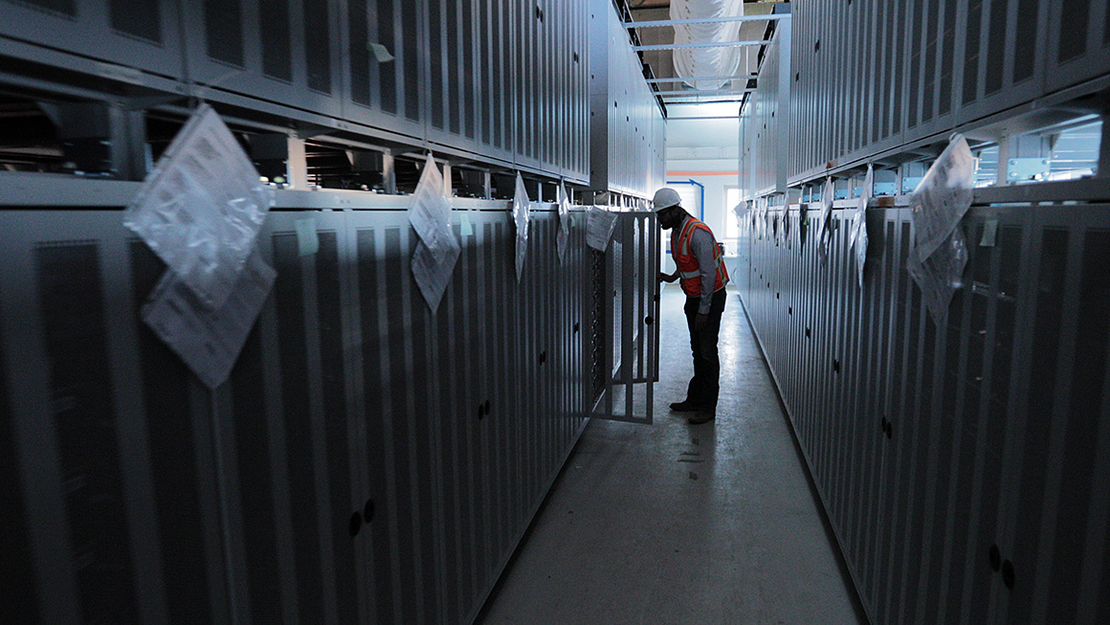 A worker inspects rows of lithium-ion battery racks at the Moss Landing Energy Storage Facility in California. The enormous battery system has a capacity of 400 megawatts, making it the largest of its kind in the world. Vistra Corp.

California is racing to add batteries to its electric grid in an attempt to prevent blackouts, cut greenhouse gas emissions and prepare for the closure of the state’s only nuclear power plant in 2025.

A plan finalized by state regulators last month calls for almost quintupling California’s storage capacity over the next four years.

But the Golden State faces significant hurdles that could scramble its plans. Shipping bottlenecks have delayed construction of new projects. Demand for raw materials used in lithium-ion batteries, which account for the vast majority of utility-scale projects, outstrips supply. And permitting and connecting all those new batteries to the grid is a difficult puzzle itself.

How California navigates those challenges could determine the trajectory of the U.S. electric sector’s transformation, analysts said.

“California is effectively a proof of concept for an accelerated energy transition that many are advocating for nationwide and worldwide,” said Dan Finn-Foley, an analyst who tracks the storage industry for PA Consulting. “If there are supply chain efforts that hold that back, it raises the stakes for transitions in other areas.”

Batteries represent the next chapter in California’s energy transformation. The state has long focused on boosting wind and solar generation to curb emissions. In 2020, renewables accounted for a third of the state’s power generation.

California nevertheless remains highly reliant on natural gas, particularly when the sun goes down, and it has faced a series of reliability crises. The state experienced rolling blackouts during the summer of 2020, when the combination of climate-charged heat waves and a lack of generation saw electricity demand exceed supply.

Those challenges have been compounded by the scheduled shutdown of the Diablo Canyon Power Plant, a 2.2-gigawatt nuclear facility slated to close in 2025. As part of the decision to shutter the plant, state regulators directed power companies to identify clean power sources that could meet demand without sending greenhouse gas emissions soaring.

Enter energy storage. The vast majority of storage systems use lithium-ion batteries, which generally can dispatch power for up to four hours. These systems are increasingly paired with solar, storing excess electricity generated during the day to be used during the evening or times of peak demand. Advocates hope batteries can address the state’s reliability issues while facilitating an expanded build-out of renewables.

“The case is set for storage. We know that is what we want. Now, how do we make sure we’re successful?” said Alex Morris, who leads the California Energy Storage Association.

In February, the California Public Utilities Commission provided an initial answer by finalizing a plan that directs utilities to install 14.7 GW of battery storage by 2032. The plan calls for a rapid scale-up of batteries in the short term, increasing from 2.5 GW this year to 4.6 GW in 2023, 10.6 GW in 2024 and 12.5 GW in 2025.

Many analysts expect California will meet its long-term goal, but they say the state will need to overcome supply chain constraints to satisfy its near-term targets.

“I think there is going to be some difficulty. California wants everything ASAP,” said Vanessa Witte, an analyst who tracks the storage industry for Wood Mackenzie. “Given the large number of procurements and the volume and number of projects, there is that much more risk of some of those projects getting delayed.”

The storage industry has grown by leaps and bounds in recent years, even in the face of supply chain constraints wrought by the Covid-19 pandemic. American utilities installed about 3 GW of battery capacity last year, bringing total utility-scale capacity nationwide to 5.7 GW. The U.S. Energy Information Administration anticipates almost 6 GW of utility-scale storage capacity will be installed this year.

But supply chain woes have hampered growth. Wood Mackenzie estimates that 2.6 GW of capacity scheduled to come online nationwide in 2021 has been pushed to 2022 and 2023. Roughly half of that is likely attributable to supply chain or interconnection issues, according to Witte.

Many of the difficulties can be traced to the onset of the pandemic, when battery manufacturing slowed amid economic lockdowns, particularly in China where much of the production is centered. Now, the surge in demand has left manufacturers scrambling to keep up.

“These kind of transport constraints have delayed projects that were expected to commence in 2021 from coming online,” Kou said.

California has to sought to address shipping challenges in part by creating a task force that has prioritized unloading vessels carrying battery components at state ports, CESA’s Morris said. Battery components are also increasingly placed on top of other cargo so they can be unloaded first, he said. California ultimately succeeded in installing 1.8 GW of storage capacity last year, according to EIA figures.

Bigger challenges have stemmed from rising demand of raw materials like lithium, graphite and cobalt, all of which are used in lithium ion batteries. The increase has largely been stoked by automakers’ push to scale up production of electric vehicles. EVs account for about three-quarters of the global market for lithium-ion batteries, while storage systems represent about 6 percent.

‘Going to be tricky’

A growing number of developers are seeking to revisit the contracts they signed with utilities when commodity prices were lower. BNEF, for instance, estimates the average cost of a four-hour battery was $227 per kilowatt-hour in 2021. When the company conducted a survey of developers recently, developers quoted costs ranging from $250 per kWh to $400 per kWh.

One of the bigger questions going forward is developers’ ability to procure materials for projects for which they have yet to sign contracts for supplies, analysts said. A growing number of contracts are indexed to the price of raw materials. The short-term pains may ultimately prove beneficial to the industry, prompting developers to experiment with new battery technologies and diversifying their supply chains, said Finn-Foley of PA Consulting.

“Yes, there could be short-term disruption, but you could see this used not as an excuse but an enabler for further policy and investment in stronger economic supply chain,” he said. “It will be a net benefit to the industry to have a more diversified and mature supply chain.”

“Based on our communications with project developers, California’s 2022 project pipeline is not expected to experience significant delays related to the emerging supply chain issues that are starting to be a concern across the storage industry, though there may inevitably be a subset of 2022 storage projects that experience supply chain-related delays, especially if the batteries are not already in-country,” she wrote in an email. “As we look out beyond 2022, there are increasing signs that the storage market is facing strong supply chain issues.”

Pacific Gas and Electric Co., which plans to bring on 1.6 GW of battery capacity by 2024, said it is performing tests for its 182-megawatt Elkhorn battery system and anticipates it will come online this summer. In a statement, the utility declined to comment on the status of nine projects for which it has signed resource adequacy agreements. But it made note of the global supply chain concerns facing the energy industry.

“Generally speaking, as with any new technology integration or construction project, there is the potential for conditions that can create delays,” PG&E spokesperson Paul Doherty wrote in an email. “The potential has increased due to global supply chain disruptions, shipping delays and construction impacts across varying industries.”

A spokesperson for Southern California Edison said the utility is working with developers to address supply chain challenges but did not provide specifics. San Diego Gas & Electric said it is on track to install 145 MW of storage this year, despite global supply constraints, and notes the state had approved an additional 161 MW in its service territory.

The supply chain is one of several challenges facing the industry, said Morris. Permitting new facilities and ensuring they can connect to the grid will be essential, he said. The sheer volume of interconnection requests has proven challenging for the California Independent System Operator, which oversees the state’s electric grid.

Ultimately, coordination between developers, utilities and state regulators will be key to meeting California’s storage goals, he said.