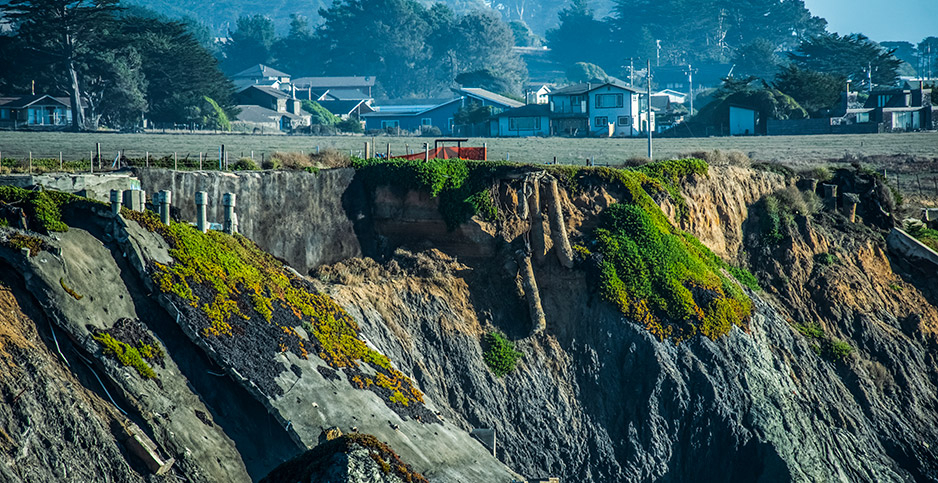 Eroding cliffs near Carmet, Calif., sent a house plunging to the beach. California homeowners could be affected by state guidance on sea-level rise. Doug Ogden/Newscom

Before the threat of rising seas was widely understood, California created an agency to protect its famous beaches from overdevelopment. Now the state Coastal Commission is pouring resources into a war against the effects of climate change, and it could lead toward the removal of oceanfront homes.

That’s raising questions about whether the commission is overstepping its authority, granted in the 1970s, as it confronts the emerging peril of sea-level rise.

The commission oversees development on 1,100 miles of coastal land. It possesses the partial power to approve or deny the construction of homes and hotels, an authority bestowed by the 1977 California Coastal Act. That law created the commission and directed it to preserve public access to beaches.

Scientists now say sea-level rise could wipe out two-thirds of state beaches by the turn of the century. Researchers with the U.S. Geological Survey and other scientists described rising oceans as a greater threat to the California economy than wildfires or extreme earthquakes, with effects hitting as soon as 2040 (Climatewire, March 14).

The commission, in response to the growing confidence of scientists, wants beach cities and counties to plan for climate impacts. One of its most controversial policies could force homeowners to abandon their seaside houses.

"The consequences of sea-level rise are so significant that we’re putting a lot of resources into planning for what we call a slow-moving disaster," said Jack Ainsworth, executive director of the Coastal Commission, in an interview.

In addition to homes, at-risk infrastructure includes low-lying wastewater treatment facilities, pipelines, highways and railroads. When "you imagine the scale of that throughout California, it’s huge," Ainsworth said. "All of that infrastructure is going to have to be moved out of harm’s way."

Those powers are being tested for the first time. How much muscle the state can exert on homeowners and cities isn’t yet clear, legal experts said.

"The limits of [the Coastal Commission’s] authority have not been precisely tested in the courts," said Sean Hecht, co-executive director of the Emmett Institute on Climate Change and the Environment at UCLA School of Law. Legal questions include whether the agency can put limits on seawalls and how far it can go with other actions that could hurt the value of homes. "It’s a very sticky situation," he said. "We still don’t know in the end how courts will view these questions."

A fight over the commission’s powers is coming soon. The agency plans to hold hearings in July on proposed language for managing sea-level rise in residential areas. It expects to adopt its "Residential Adaptation Guidance" by year’s end. The most recent draft offers options that include "managed retreat," or removing homes so beaches can migrate inland rather than disappearing under the water.

That has triggered fierce opposition from local governments, homeowners and the real estate industry.

The California Association of Realtors described chaotic scenarios in which the commission "would force the removal and relocation of houses that are still habitable." The group also opposed the commission’s suggestion that cities create hazard zones as a first step toward managed retreat.

"Zones will prematurely impose private property rights restrictions," Jeli Gavric, a legislative advocate for the California Association of Realtors, told the commission in a letter in April. "Zones will stigmatize properties and potentially make them uninsurable."

Cynthia Mills, with Presto Mortgage Co. in Pacifica, Calif., said putting homes in hazard zones could make it impossible to sell those house in the future.

"As soon as they put that [hazard zone] in writing, lenders are going to say we’re not going to lend money to these properties because they’re at risk of disappearing," Mills said. The managed retreat language could scare off banks and make it impossible for buyers to get a mortgage, she said.

‘Put off the inevitable’

Behind the scenes, the commission is working to quell objections. It’s looking at a public relations effort with the state’s Ocean Protection Council to explain why it’s taking such strong actions.

"Uncertainty and fear leads to anger. We seem to be the focus of the anger," said Ainsworth of the Coastal Commission. "We’re not the enemy. It’s sea-level rise and climate change, and that’s the message I want to send out. We’re trying to help local communities."

The commission is rewriting its draft guidance to use simpler language and "tell the story in a more compelling way," Ainsworth said.

Managed retreat isn’t going away in the rewrite, he said, though he noted it’s just one option. He also said the commission doesn’t have the authority to force cities to remove private homes. That would require new legislation.

"It’s really going to take some really brave local government officials to make some tough decisions," Ainsworth added. "I sure hope they do because [otherwise] you’re just going to put off the inevitable. Nature’s going to have its way in the end, and if we don’t plan for it, it’s just going to be disastrous, and it’s going to cost us more in the long run."

A 1972 California ballot measure, Proposition 20, birthed the California Coastal Commission. It was in response to proposals for gated communities along the coastline, said Warner Chabot, who dropped out of college to run the ballot campaign. He’s now executive director of the San Francisco Estuary Institute.

Proposition 20 asked the state Legislature to create the agency. Lawmakers passed the Coastal Act, which stipulated that the commission should ensure "maximum access … and recreational opportunities" at the beach for all residents.

The Coastal Commission for many years focused on beach-access issues, like cracking down on wealthy homeowners who erected fences on public sands. Some Malibu residents hired security guards to chase off visitors, telling people erroneously that they were on private property.

Chabot said the actions of the commission today fit with the 1977 law.

"The original intent of the Coastal Act was to preserve and protect and maintain the integrity of the California coastline," Chabot said. When sea walls are built to protect homes, that eventually means "the beach disappears and the thousands of people who had access to that beach no longer have a beach."

While the Coastal Act doesn’t deal specifically with sea-level rise, "it did speak to the whole idea of hazards from flooding, fire, geologic issues," Ainsworth said. "So it fits well with hazard mitigation planning in today’s context with sea-level rise and climate change."

Beach cities and counties under the Coastal Act also get oversight, he said. They’re supposed to draft local management plans, but the commission has battled cities over plans it claims didn’t comply with state law.

Cities with approved plans largely decide about whether to issue development permits. The commission can challenge permits if it believes they’re out of compliance with the Coastal Act.

Some lawyers argue that the commission is exceeding its mandate with its new residential adaptation language.

"The managed retreat policy appears to be a way in which the commission can take private property for public use without paying just compensation," said Larry Salzman, an attorney with the Pacific Legal Foundation (PLF), which has represented homeowners challenging the commission’s decisions.

If the state wants to remove properties to let the beach migrate, it should do so under eminent domain, Salzman said. That would mean condemning them and paying fair market value, he said.

The California agency is less subject to political pressures than other government bodies because it was created by a ballot measure and its job is "protecting the coast for the people, and not necessarily the coastal homeowners," said Gary Griggs, professor of earth and planetary sciences at the University of California, Santa Cruz.

Griggs said the preferred option used by many cities — dumping more sand on beaches to combat higher oceans — only works for short periods of time.

"The only long-term solution is going to be managed retreat," Griggs said. "That’s just a really, really difficult undertaking, and we don’t have a lot of examples to say here’s how they did it here."

About a decade ago, the commission began looking seriously at sea-level rise and its impact on beach access, said Charles Lester, who was the commission’s executive director from 2011 to 2016.

"By the time I became director, we’d been talking about the need to address climate change more aggressively," Lester said. "That’s the first thing I did when I took over the agency was to begin pursuing that."

Lester obtained money from the state Legislature so cities and counties could study the local effects of sea-level rise. They started documenting that sea-level rise could wipe out some beaches by 2030 in winter months (Climatewire, July 21, 2017). That triggered new commission scrutiny.

"We’ve now been forced to confront, oh, this is going to happen," Lester said. For the commission, "the question is raised, what are you going to do about it?"

The number of sea walls along California beaches, particularly in Southern California, rose sharply over the last few decades. In 1971, walls existed on roughly 7% of beaches in Ventura, Los Angeles, Orange and San Diego counties. That grew to 33% in 1998, and 38% last year, said Kiki Patsch, assistant professor of environmental science and resource management at California State University, Channel Islands.

That tracks with a shift toward more destructive storms in the Pacific Ocean after 1977. That likely triggered more requests for shoreline protection, she said.

Under Lester, the commission tightened up its policy on permitting sea walls. The agency now limits sea walls to homes that were built before 1977, when the Coastal Act took effect. Homes built before that year but that undergo major redevelopment are also considered new and must waive their right to a sea wall.

The Coastal Act doesn’t unilaterally allow the commission to keep homeowners from protecting their houses built after the law was passed, said Arie Spangler, with the Jon Corn Law Firm in San Diego County. Spangler and other lawyers are fighting the commission’s position that redeveloping a home built before 1977 makes it no longer eligible for a sea wall.

If the agency wants to make those moves, "they should try to get the Legislature to amend the Coastal Act," Spangler said.

The state owns the land westward of the mean high-tide line, or generally where the wet sand starts. That line is moving inland with sea-level rise, she said.

"As the ocean moves landward, public access is supposed to move inland. Whose property is it going to squeeze out?" Sivas said.