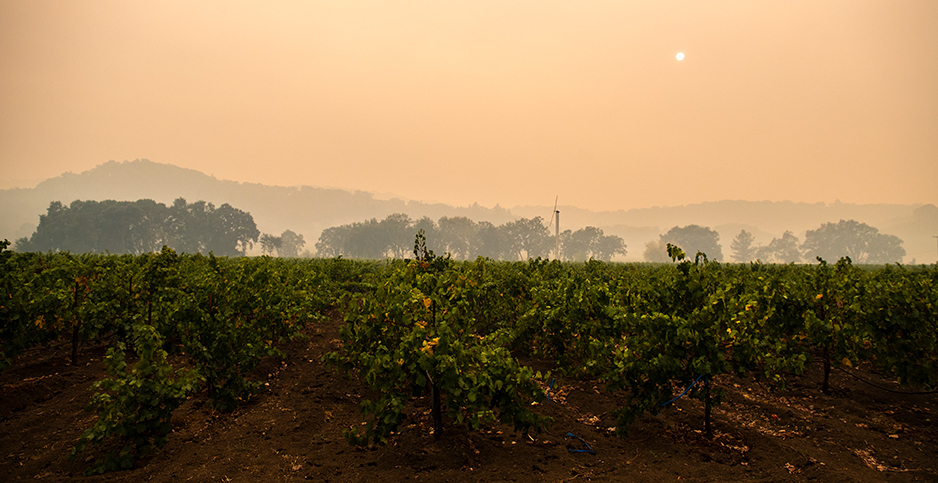 Smoke from the Glass Fire is seen near Kenwood, Calif., in the Sonoma Valley wine region on Monday. Chris TuiteImage/ImageSpace/ZUMA Press/Newscom

Wildfires in California wine country are forcing vintners to confront an emerging crisis for their industry: Smoky flavors threaten to spoil some of the nation’s fanciest red wines for years to come.

Growers have long known "smoke taint" can ruin wine if the grapes are exposed to wildfires. But this year’s damage could be on a scale previously unseen, and labs can’t keep up with the demand for tests that show whether vintages are even worth making.

"This was unprecedented," said Anita Oberholster, an associate specialist in Cooperative Extension at the University of California, Davis, who has been watching the phenomenon unfold since the first wildfires hit the region weeks ago. "You almost can’t have enough capacity."

Just one lab, run by ETS Laboratories, is set up for smoke-related testing in the region, although others have started to step in on a provisional basis to handle the demand. Industry sources said test results were already taking as long as a month — then new wildfires flared in recent days, forcing ETS to temporarily close its St. Helena lab in the heart of the Napa Valley.

The latest blaze, called the Glass Fire, has burned 36,236 acres about 13 miles northwest of Napa, according to the National Interagency Fire Center.

Testing is critical for winemakers to know how much of this year’s vintage can reasonably be offered for sale. It’s also mandatory for growers who want to file a federal crop insurance claim, said Gladys Horiuchi, director of media relations for the Wine Institute, a California trade association.

Smoke taint occurs when various compounds in smoke — at least 13 of them, Oberholster said — accumulate in the skin of wine grapes. Labs can test for the compounds, typically when growers ferment a small sample about two weeks before harvest, she said.

But the science and the potential impact are far from exact. The compounds have varying effects, and they interact with each other during fermentation, Oberholster said. Sometimes, relatively high test results don’t actually result in smoky flavors — and lower ones do.

"It’s like having a puzzle, but you only have five of the 20 pieces," Oberholster said.

"Nothing else can give you that quality," she said.

The distinction can be a make-or-break issue, especially for high-end wineries that know consumers will be driven away by one taste of a label gone bad. Recognizing the extent of the problem, some bigger wineries have bought their own testing equipment, although at $150,000, it’s pricey for a small operation, said Gavin Sacks, a professor at Cornell University and associate chairman of its Department of Food Science.

Adding to the uncertainties, the effect also seems to depend on the type of trees burning in the wildfire, Sacks said. In Australia, where much of the smoke-taint science is being studied, brush fires are the culprit, and they emit different smoke compounds from California’s forest blazes, he said.

The wine itself is another factor that’s hard to pin down, depending how it’s made in the first place.

Smokiness tends to be more noticeable in white wines, Sacks said, and wines made to have a slightly smoky tone aren’t as negatively affected.

All of the mystery points to a need for standardized tests, researchers said. Oberholster said scientists are developing threshold levels for the smoke compounds in question, realizing that they probably haven’t uncovered all the compounds that could taint wine.

The increased frequency of wildfires also means that researchers don’t have many smoke-free years to use for comparison, she said. Last year was light, but fire and smoke in prior years including 2017 hit some growers hard (Greenwire, July 3, 2019).

With climate change feeding drier and hotter conditions, neither the wildfire crisis nor smoky wine is about go away, industry insiders said.

"Climate change is an issue for everybody, and the industry is doing its part," said Horiuchi of the Wine Institute. "We don’t generally do crystal ball here, but we are seeing more of these fires."

For now, ETS Labs is trying to address the backlog and directing customers to various other labs, including in other states.

The company said on its website today, "We are temporarily unable to provide estimated due dates for smoke impact samples due to the current wildfire situation. We will resume providing these estimates as soon as normal throughput rates can be reestablished."