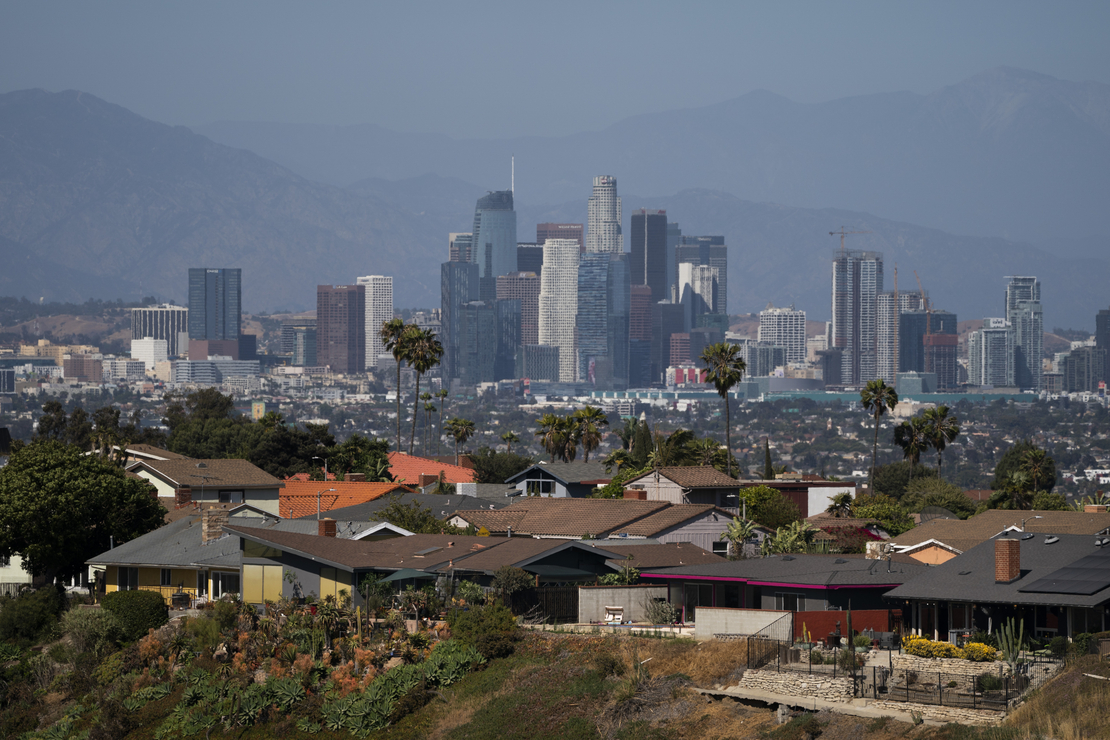 A federal judge undid a Trump-era decision that would grant rights of way to Cadiz Inc. for a pipeline sending water from the Mojave Desert to the Los Angeles area. Pictured are homes sitting on a hilltop with a view of the downtown LA skyline June 10, 2021. AP

A controversial Southern California water pipeline project has hit another snag, with a federal judge’s ruling that allows the Bureau of Land Management to withdraw key approvals granted during the Trump administration.

In the latest turn of a long-running and politically sensitive dispute, U.S. District Judge George Wu ruled yesterday that BLM acted properly when it remanded two rights of way that had been granted to Cadiz Inc. by the Trump administration.

“This is not a scenario in which an agency — for example — compiled a full NEPA record, came to a well-supported opinion, and then reversed its opinion mere months later,” Wu wrote, referring to the National Environmental Policy Act.

Wu added that in the case of the Trump administration’s decisionmaking, “here, there is no Environmental Assessment, Environmental Impact Statement or accompanying record of decision … only what appears to be a rushed, cursory decision to grant the rights-of-way.”

Cadiz seeks to transport water through an existing gas pipeline that runs across federal lands, as part of an ambitious plan to extract water from an aquifer underlying its desert lands and sell it to urban areas near Los Angeles (Greenwire, Dec. 6, 2021).

Environmentalists hailed the decision by Wu, a George W. Bush administration appointee to the U.S. District Court for the Central District of California.

“We’re pleased the court vacated this illegal Trump-era decision that would have allowed this massive water pipeline to move forward without the necessary environmental review,” said Lisa Belenky, a senior attorney at the Center for Biological Diversity.

Belenky added that “Cadiz’s water-privatization scheme would dry up irreplaceable desert springs and seeps that are crucial to wildlife, even more so now because of climate change.”

The executive chair of the Cadiz board of directors, Susan Kennedy, countered in a statement that the “ruling will have no impact on completion of the Cadiz Water Conservation and Storage Project and we do not expect additional environmental review by the BLM to cause significant delay.”

Kennedy added that “Cadiz’s ownership of the pipeline is unaffected by the Court’s ruling, and any additional environmental review required by the BLM to convert the pipeline to transport water will be done concurrently with the existing construction schedule,” and she said that “the Company has no concerns with additional environmental review and believes review can be conducted without impeding the construction timeline.”

Cadiz has been exploring for many years ways to deliver water from a groundwater aquifer under its property to Southern California.

Conservationists and lawmakers including Democratic Sen. Dianne Feinstein of California have strongly opposed those efforts, contending that drawing down the aquifer would threaten a fragile desert ecosystem.

Cadiz has pursued multiple potential routes to ship water. The company petitioned BLM for the approval to convert the existing right of way to use the pipeline for water in May 2020, saying it could transport about 25,000 acre-feet of water annually.

On Dec. 21, 2020, in the final weeks of the Trump administration, BLM transferred a portion of the right of way to Cadiz and granted another new one, totaling about 64 miles of discontinuous federal land.

In a pointed footnote aside, Wu stated that “strikes the Court as a quick turnaround for the right-of-way decision to have been issued within a matter of several months in late 2020.”

The Center for Biological Diversity, the Sierra Club and other groups challenged that approval in the California district court.

Other groups have, however, supported the project and have argued that the water moved by the pipeline would serve disadvantaged communities.

The Biden administration subsequently contended that the Trump team used a “rushed process” to grant the rights of way and said the approvals violated NEPA’s analytical requirements. Wu agreed.

“While the BLM knew that Cadiz intended to transport water through the pipeline in the right-of-way, the BLM did not identify the source of the water that would be transported or evaluate the potential environmental impacts of drawing down water from such source,” Wu wrote.