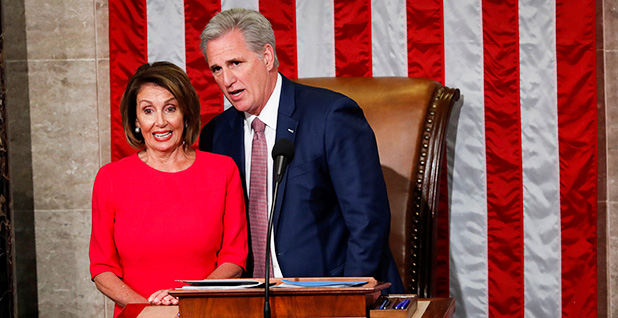 The new House of Representatives is rolling out its game plan and strategies for the next two years, and it’s clear which state holds the most clout: California.

"Speaker of the House and minority leader, that’s a lot of juice," said John Russell, principal at the Dentons law conglomerate.

The state’s power to shape the agenda goes beyond leadership. In the environment and energy fields, 12 Californians are subcommittee chairs and vice chairs. Californians make up the majority of rank-and-file committee Democrats, as well. Pelosi likely had a hand in this, too.

It didn’t hurt that two of the three co-chairs of the Democratic Steering Committee are from California — Reps. Eric Swalwell of suburban east San Francisco and Barbara Lee of Oakland. The third member, Rep. Rosa DeLauro (D-Conn.), is a longtime Pelosi ally.

"They can be on [panels] sort of from an informed perspective about what happens when you address climate change," Phillips said. "They’re also coming from districts that see the impact of climate change. It makes a difference when you go home and a lot of your folks have been burned out because of incredibly dry weather" and unusual high winds at nontraditional times of the year.

California is the nation’s most populous state, home to nearly 40 million people. Members of the Golden State delegation are proud of their clout.

"Just in terms of the practical effect, it means we will have more members on committees, more votes at the committee level, more influence within the Democratic caucus on the Steering and Policy Committee and other places where key decisions get made," said Rep. Jared Huffman, a third-termer who represents California’s 2nd District, along the north coast of the state from the Golden Gate Bridge to the Oregon border. "It helps in every way."

It doesn’t take more than a glance at committee rosters to see the strength of the delegation.

The California Democrats who flipped GOP seats are "going to need some high-profile wins" to stay in office, said Russell. "You want to put them on committees where they’re going to generate press coverage. Especially in a crowded media market like California, finding a way for members to raise their profile is incredibly important."

Rouda said in an interview that Pelosi "plays the long game as well as anyone. … She recognizes that to maintain the majority, we have to keep these seats we flipped from red to blue. We need to keep other seats in difficult districts, and we need to add more to it."

He sees California’s actions on warming as "a blueprint for what our country could be doing on a much larger scale in addressing climate change — creating new jobs, creating new industries and creating healthier Americans."

"One is oversight, which has been totally missing for the last two years," he said. "The second is putting forward good policy ideas. … We’ve mostly played defense."

"We have heard nothing but the same old attacks on our environmental laws from Republicans for the last few years," he said in an interview. "We all recognize that we’ve got a wildfire problem. We need to come up with some actual solutions that work within our environmental values, but also make our communities safe and our forests healthier."

On water, he said, "What we’ve had for the last six years in this Congress is a very tired recycling of these old arguments that pitch fish against farmers."

Napolitano’s priorities for the T&I Subcommittee on Water Resources and Environment include addressing "the growing water infrastructure crisis facing all communities — large, small, rural, and tribal," her communications director Jerry O’Donnell said in an email.

"Additional investment in water infrastructure and drought resiliency measures will ensure the availability of clean, safe, and affordable water and wastewater services for our families and businesses, while supporting the creation of additional U.S. jobs," O’Donnell added.

The Energy and Commerce Committee is tough to get on, so finding spots for members in other places is important, political analysts said. That’s why Pelosi’s decision to re-establish a select committee on climate change — now named the Select Committee on the Climate Crisis — is notable.

All three said they’ve seen climate impacts in their districts. In some cases they’ve faced them firsthand.

Levin, an environmental attorney who also headed a clean technology trade group, ran with the ballot description "Clean Energy Advocate." He’s called for rejoining the international Paris Agreement on climate and other actions to limit warming.

In an interview he said the select committee "has the opportunity to bring to life much of the written research that we’re hearing about and reading," including the latest Intergovernmental Panel on Climate Change report and the National Climate Assessment.

"In coastal areas, such as my district, we’re already directly seeing the impacts. My hope is we can bring the evidence to light in the way a report cannot," he said.

"We’re seeing significant coastal erosion and sea-level rise throughout my district," Levin said. "You have structures that have been in place along the coast for decades or longer that are now at risk of being lost."

Asked how she’d persuade people to follow California’s efforts, she noted the state has the fifth largest economy in the world alongside "incredibly diverse regional viewpoints and policy priorities." It has led the way on advancing renewable energy, alternative transportation infrastructure, energy efficiency and protecting the environment, she said in an email.

"California is a clear case study in how bold, environmentally-friendly energy policy and economic success are not mutually exclusive." Brownley said. "The saying ‘As California goes, so goes the nation,’ is true when it comes to climate policy."