California’s megadrought is worse than you think 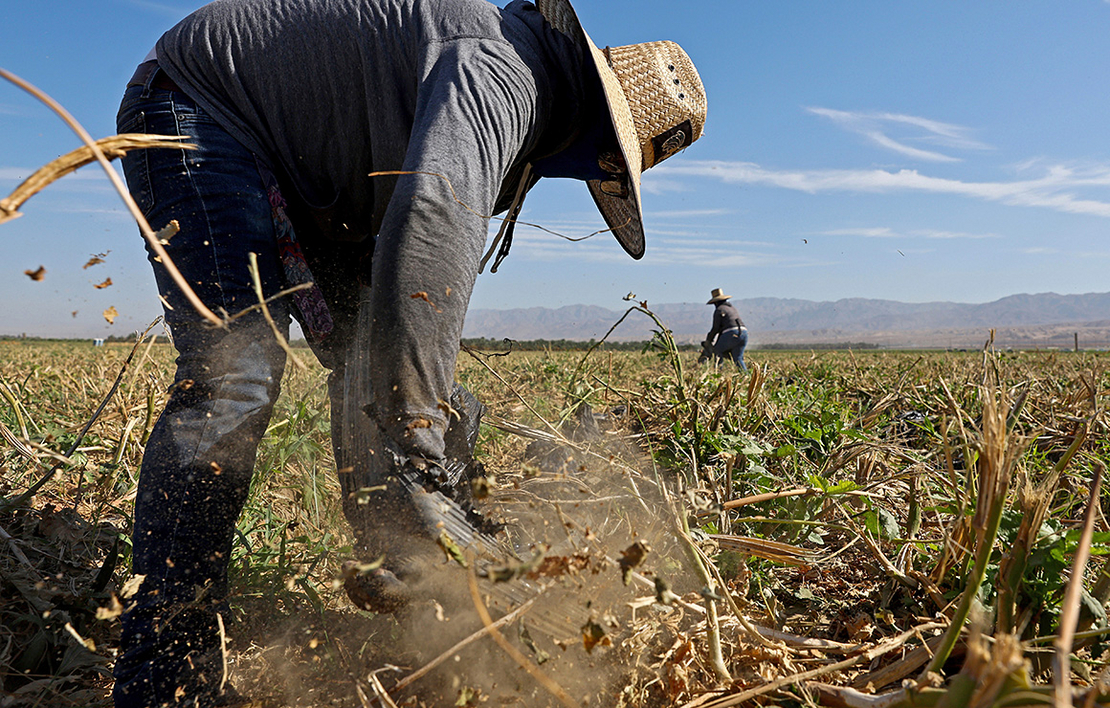 Farm workers clear out hosing that was used to irrigate an okra field near Coachella, Calif. Mario Tama/Getty Images

When Maria Regalado Garcia tried to wash the dishes in her California home one recent morning, only a trickle of water emerged from the kitchen faucet. Other taps in her Tooleville house in rural Tulare County ran similarly dry.

The lack of water meant Garcia, 85, couldn’t brush her teeth properly or fill a swamp cooler that pumps out chilled air — a necessity with temperatures topping 100 degrees in her central California town. So Garcia fled to her granddaughter‘s home in Exeter, a few minutes away, to have a place cool enough to sleep.

Having “no water has impacted every aspect of my life,” Garcia said in Spanish translated by a community assistance worker. “My grasses are turning brown. My little roses are dying.”

Garcia and her neighbors, who intermittently lose tap water at home, are among those most affected by a historic drought that’s blanketed the West, scorched California and caused a growing list of water troubles for residents and farmers.

Nearly three-quarters of California is in either extreme or exceptional drought, considered worse than severe, according to the U.S. Drought Monitor. It’s so bad that scientists say the ongoing drought in the western United States marks the region’s driest 22-year stretch in more than 1,200 years.

The conditions have affected a broad swath of regions and industries. California wells are going dry. Farmers are either paying a premium for water or letting their fields sit empty. And there is growing concern that water exports from the Colorado River could come to a halt.

“We are dealing with a changed climate in California that demands we reimagine not just how we use water, but how we capture, store and distribute it throughout the state,” California Gov. Gavin Newsom said last week as he addressed local water leaders.

Scientists pin a large share of the blame for the megadrought on climate change. UCLA climate scientist Park Williams, whose recent work flagged the ongoing Western drought as a historical anomaly, said about 40 percent of its severity is due to climate change. The study looked at California, Oregon, Arizona, Nevada, Utah, New Mexico, Colorado, Idaho, Wyoming and southwest Montana.

“The turn-of-the-twenty-first-century drought would not be on a megadrought trajectory in terms of severity or duration without” human-caused climate change, the study said.

But others are saying elected officials such as Newsom aren’t doing enough to respond to the historic conditions. Some argue the state needs to impose mandatory cutbacks, limits on commercial water use and more storage options.

Andrew Fahlund, senior program officer at the Water Foundation, a California nonprofit, said it would have been helpful to take steps to conserve water “earlier in the drought cycle.”

But “it is a little too late to do that this time around,” he said.

More than 660 wells have gone dry

Tooleville, a town of about 700 people, depends on wells for water. Those wells have run dry as climate change exacerbates summer heat and shrinks California’s winter snowpack.

In response, state- and county-funded water deliveries now are arriving a few days a week in Tooleville, as well as in Seville and Yettem — other Tulare County towns without running water.

So far this year, the state has had more than 660 wells go dry. The majority of those are in the San Joaquin Valley, said Kelsey Hinton, spokesperson with Community Water Center, which has offices in Visalia, Sacramento and Watsonville.

Water deliveries cover some of the need. People keep their showers short. There’s limited watering outdoors, but the cutback is helping to kill some of the trees that offer shade and absorb carbon emissions.

Celeste Perez, who lives in Dinuba in Tulare County, has water in a well on her property but rations how much she uses because of the drought.

She’s keenly aware of water shortages because she’s helping deliver water to Seville and Yettem through Self-Help Enterprises. The nonprofit is coordinating with the Seville-Yettem Community Services District, where Perez is general manager.

Perez added that she had to remove a 60 foot pine in her backyard because the dying tree posed a fire hazard. “For safety issues, we had to cut it down,” she said.

The worry is not unfounded. In East Orosi, also in Tulare County, a home caught fire and burned down in part because there was no water pressure in a fire hydrant, the Los Angeles Times reported. A power surge had damaged a well pump and left the area without water for about 14 hours.

Both state and federal water delivery projects have cut shipments to farmers because of the lack of water available in their reservoirs.

Another challenge for farmers is state legislation that passed in 2014 and took effect in 2020. It bars pumping groundwater unless it can be replaced through rain or snowmelt. However, a series of local agencies planning sustainability solutions have until 2040 to do it.

“That’s a game changer for the industry because before they could … pump as much water as they needed,” said David Magana, senior research analyst with Rabobank, a Dutch multinational banking and financial services company.

Now, many who are unable to get water from state or federal locations are restricted on how much water they can pump. Getting more means paying a penalty — and incurring extra expenses.

Magana said extra costs are as high as $500 to $1,000 per acre foot that farmers pay to an irrigation district or a farmer that has water available.

California’s agricultural industry is valued at $50 billion, and that includes about 8 million acres of irrigated land, Magana said. The state produces about one-third of all the vegetables and about two-thirds of fruits consumed nationwide.

Tricia Stever Blattler, executive director at the Tulare County Farm Bureau, said farmers are hurting because they’re not getting water from the federal water project.

“The drought conditions here, you know, are making farmers in Tulare County have to reevaluate everything about their strategies to maximize using what little surface water they’re receiving from their federal contracted water,” she said. “And then they can pump only a limited amount because of California’s new groundwater law.”

Nearly all the Western states — California, Oregon, Idaho, Montana, Utah, Nevada, Colorado, Wyoming, Arizona and New Mexico — are suffering from some level of drought. Severe dry conditions extend through Texas and into parts of Oklahoma and Arkansas.

Adding to that problem is that the Colorado River — a lifeblood of water out West — is heading into crisis territory. Reservoirs on the Colorado River could fall so low that water exports to Western states could stop, warned California Natural Resources Secretary Wade Crowfoot at a recent agricultural conference.

If there is “middling precipitation over the next couple of winters,” the two largest reservoirs on the lower Colorado — Lake Mead, 24 miles east of Las Vegas, and Lake Powell, 200 miles north of Flagstaff, Ariz. — could fall so low “we wouldn’t be able to export any water to the southwest, which would of course be catastrophic,” Crowfoot said at the Agri-Pulse Summit.

“I’ll argue that these conditions are unprecedented,” Crowfoot said. ”We are in uncharted waters.”

Lisa Lien-Mager, a spokesperson at the California Natural Resources Agency, wrote in an email that “the state is working closely with local CA water agencies and other basin states that rely on the Colorado River to determine how best to reduce water use now to reserve water in storage” in Lake Mead and Lake Powell.

In California, Lake Oroville, the largest state-managed reservoir, was 41 percent full yesterday. Last winter, it received about 25 percent of the precipitation expected.

Lake Shasta, a federally-managed reservoir, yesterday was at 37 percent, compared to the historical average of 54 percent for this time of year.

California currently has no mandatory conservation measure in place statewide, though there have been some water-conserving efforts.

The California State Water Resources Control board has imposed a ban on watering decorative grass at commercial, industrial and institutional properties. Newsom last year asked residents to conserve 15 percent voluntarily, and earlier this year he told local water agencies to escalate their responses.

But the Newsom administration’s response to the drought has triggered criticism from at least one former state official.

Max Gomberg recently resigned his position as climate and conservation manager at the California State Water Resources Control Board. In his resignation letter, Gomberg said that “witnessing the agency’s ability to tackle big challenges nearly eviscerated by this Administration has been gut wrenching.”

Gomberg in an interview said Newsom has hobbled what had been the independence of the agency’s chair and has resisted imposing a mandatory conservation measure for urban users. That would help, Gomberg said, but more importantly, changes are needed to how agriculture uses water.

“One of the things that is increasingly clear to people who follow this stuff is that sooner or later — and probably sooner, right — a lot of this ag land right now is going to be unviable,” he said. “It won’t have water.”

Erin Mellon, Newsom’s communications director, defended the governor’s approach in an email. Mellon wrote that Newsom “prioritized changing the way we approach our water challenges” when he first took office with the development of the Water Resilience Portfolio, a comprehensive plan for the state’s approach to water management.

Newsom also worked with the legislature to invest $8 billion on efforts that include diversifying water supplies, buttressing ecosystems, improving infrastructure and “ensuring California is better able to manage hotter and drier weather,” she said.