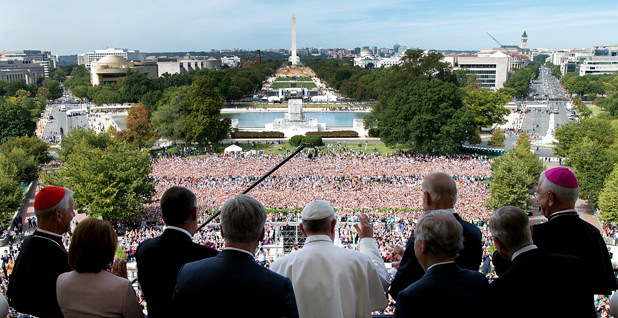 Pope Francis, accompanied by members of Congress, waves to the crowd from the Speakers Balcony on Capitol Hill in Washington, D.C., today after addressing a joint meeting of Congress inside. Photo by Doug Mills/The New York Times courtesy of AP Images.

In his historic speech on Capitol Hill — the first by a pontiff to the U.S. Congress — Francis doubled down on his recent efforts to prompt bold global action to tackle climate change and other environmental problems, citing them as moral issues.

Francis highlighted his recent encyclical on global warming and reiterated a demand for "a courageous and responsible effort to redirect our steps and to avert the most serious effects of the environmental deterioration caused by human activity."

And he urged the U.S. government and Congress to do their part. "I am convinced that we can make a difference. I’m sure," he said, prompting a standing ovation from Obama administration officials including Interior Secretary Sally Jewell and U.S. EPA Administrator Gina McCarthy.

He went on, "I have no doubt that the United States — and this Congress — have an important role to play. Now is the time for courageous actions and strategies, aimed at implementing a culture of care and an integrated approach to combating poverty, restoring dignity to the excluded and at the same time protecting nature."

Today’s environmental mention was relatively brief — one paragraph in a speech that stretched longer than 40 minutes. And he did not mention "climate change" or "global warming" specifically, just as he used general language about safeguarding life and the family to make his statement opposing abortion. Experts who have observed the pope’s style say he uses gentle words to pose difficult questions.

But his call for an end to partisan deadlock on climate change and other issues was unmistakable, and was part of a larger theme calling for cooperation and reconciliation. Elsewhere in the speech, he denounced the tendency to form entrenched camps and "every form of polarization."

The address also touched on social justice, addressing global violence, combating extremism and advancing peace. And Vatican experts who warned that Francis would not fit neatly into the nation’s political paradigm were proved correct.

Republicans were brought to their feet when the pontiff referenced the need to "protect and defend human life at every stage of its development," only to see him pivot immediately to a denunciation of the death penalty.

Francis’ audience was polite, but some of its divisions were subtly on display.

His reference to his environmental encyclical drew much more applause from the Democrats seated to his left in the House chamber than the Republicans to his right. When he called on lawmakers to "make a difference" on warming, Democrats — including Sen. Sheldon Whitehouse of Rhode Island, a vocal proponent of climate action dressed in a broad green necktie — stood and clapped loudly. But the Republican side of the chamber remained largely quiet. A few members — including Rep. Jaime Herrera Beutler (R-Wash.) — clapped quietly.

Sen. Lindsey Graham (R-S.C.), the only GOP contender for the 2016 presidential nomination to consistently affirm the science of man-made climate change, was virtually the only member on his side of the room who stood for an ovation in response to the pope’s environmental remarks. The long-shot contender has said that if he were nominated, the debate on climate change in the general election would focus on policy, not science.

Two seats over, Sen. James Inhofe (R-Okla.) sat with his hands tightly folded in front of him.

At least one Republican Catholic lawmaker skipped today’s appearance. Rep. Paul Gosar (R-Ariz.) announced last week that he would boycott over reports that the pope would reference climate change. And whether or not they intended to make a statement, Supreme Court justices Samuel Alito and Antonin Scalia — both Catholics — were also not in attendance. The only four members of the high court present were Chief Justice John Roberts, Sonia Sotomayor, Anthony Kennedy and Ruth Bader Ginsburg.

Among those who did attend today’s speech was environmentalist and Democratic mega-donor Tom Steyer, who was a guest of House Minority Leader Nancy Pelosi (D-Calif.).

‘Not going to change anybody’s mind’

"The pope is not going to change anybody’s mind on climate change," said Republican strategist Mike McKenna. "The pope doesn’t vote in United States elections, and members of Congress only respond to votes." He added that the argument that policymakers have a moral obligation to act on the environment is "toxic."

The pontiff’s calls for action might put Republicans — including House Speaker John Boehner (R-Ohio), who invited him — in an awkward position. "Nobody likes to have a disagreement with a guest in their house, right?" McKenna said. "So, yeah, it’s awkward."

Boehner, a Catholic who invited the pope to address Congress and met with him prior to his speech today, cried during the address to Congress.

Some GOP lawmakers expressed their environmental disagreements with the pontiff in advance of his speech.

Inhofe, one of the leading critics of Obama’s environmental agenda, said before the speech that he respectfully disagrees with the pope’s climate stance (E&E Daily, Sept. 24).

The Republican-led Congress has shown more enthusiasm for efforts to stymie administration climate policies than for advancing their own.

The House has voted numerous times to scuttle the Clean Power Plan for existing power plant carbon and other EPA emissions rules, and to defund U.S. participation in the United Nations Framework Convention on Climate Change, climate aid funds and other activities. The Senate GOP leadership is expected to use the Congressional Review Act in an effort to veto the power plant rule after it is printed in the Federal Register next month.

Annie Leonard, executive director of Greenpeace USA, called the pope’s "leadership" on climate change issues "truly inspiring." She added, "No one understands the devastating effects of human appetite for fossil fuels better than the vulnerable communities impacted by pollution from coal, fracking and oil production, or living in the wake of typhoons, droughts and hurricanes."

Dan Weiss, senior vice president for campaigns at the League of Conservation Voters, welcomed the pontiff’s message on climate issues. "Those remarks will likely add supporters as well as increase enthusiasm for it," Weiss said. However, he added, "my guess is most Republicans will choose to follow the Koch brothers over following the pope when it comes to climate change."

Weiss said he’s hopeful that the pope’s stance could offer political "shelter" for "congressional Republicans who want to abandon the climate inaction position of their caucus." It "may not happen tomorrow, but it does provide some space for that to happen down the road," he said.