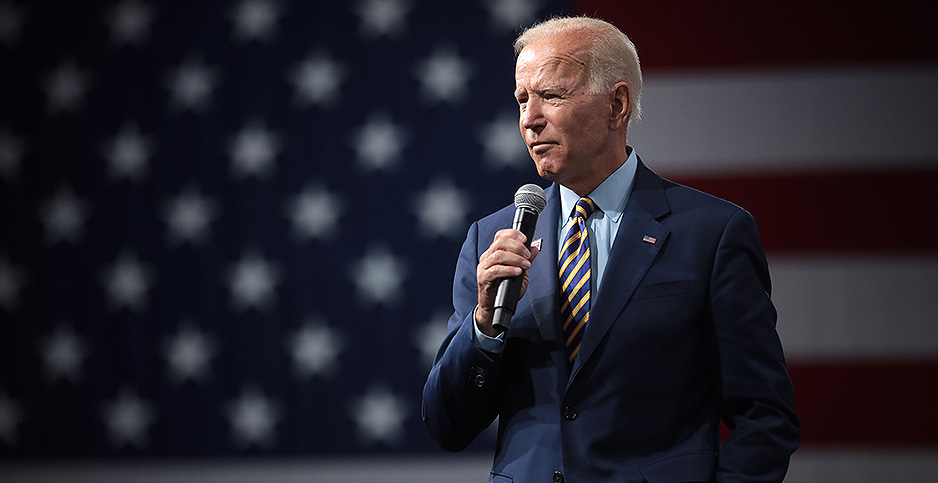 Joe Biden is under pressure to strengthen his climate plan. A task force with his presidential campaign recommended deriving 100% electricity from clean sources by 2035. Gage Skidmore/Flickr

Democratic climate goals are coming into focus as different wings of the party converge on a narrowing range of policy proposals.

The task force will recommend a goal of 100% clean electricity by 2035, according to a person familiar with its discussions. The group will also suggest short-term benchmarks for decarbonizing buildings and transportation, as The New York Times first reported yesterday.

The 2035 deadline would be more aggressive than some Democratic proposals and weaker than others. But the distance between those poles has been shrinking over the past few months, as the pandemic-fueled economic crisis has drawn Democrats into supporting more federal spending and as new research suggests rapid decarbonization could be feasible.

The plan, developed by the House Select Committee on the Climate Crisis, sets a stronger target than a bill introduced in January by Rep. Frank Pallone (D-N.J.), chairman of the Energy and Commerce Committee. Pallone’s bill, the "Climate Leadership and Environmental Action for our Nation’s (CLEAN) Future Act," would seek 100% clean energy by 2050.

On the left end of the spectrum, Sanders spent the past year campaigning for 100% renewable electricity by 2030. And the presidential campaigns of Sen. Elizabeth Warren (D-Mass.) and Washington Gov. Jay Inslee (D) called for an electricity standard that achieves 100% clean energy by 2035.

Clean energy standards often include nuclear power because it is a carbon-free source of electricity.

Biden has called for the entire U.S. economy to achieve net-zero carbon emissions no later than 2050. But his plan is silent on most interim goals, and it doesn’t have a deadline for the United States to fully decarbonize the electricity sector.

It remains to be seen whether Biden adopts his task force’s recommendations. He has hinted at expanding his proposals for environmental justice, federal investments and short-term mobilization timelines. His campaign has also praised the House climate committee’s plan.

Activists got a boost last month when the University of California, Berkeley, released a study finding that the U.S. electric grid could accommodate 90% clean energy by 2035 without raising consumer costs, sacrificing dependability or building any new fossil fuel plants.

The study found that the plummeting costs of solar energy, wind energy and battery storage mean that those sources could supply the bulk of U.S. energy demand in 15 years. Combined with existing natural gas, nuclear and hydroelectric capacity, the energy portfolio is enough to meet electricity demand during low periods of renewable generation.

As of now, energy producers are on target to achieve about 55% clean electricity by 2035, according to the report.

A build-out of renewables and energy storage to get closer to a 90% clean energy grid would require policy changes. The Berkeley researchers pointed to new tax credits, clean energy standards and streamlined project permitting.