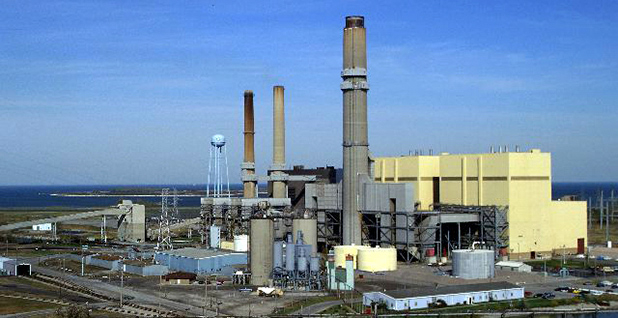 Michigan utility company Consumers Energy plans to shutter the last two units of its coal-burning D.E. Karn generating station in 2023. The power plant, pictured here in 2010, is located on the shore of Saginaw Bay in Hampton Township. Consumers Energy/Flickr

Michigan utility Consumers Energy will take another step toward meeting its carbon-reduction goals in the spring of 2023 when it pulls the plug on the last two units at the coal-burning D.E. Karn generating station on the shore of Saginaw Bay.

But shutting down the 544-megawatt plant doesn’t eliminate almost $700 million in unrecovered investments in Karn — costs that will fall to the utility’s 1.8 million customers even after the plant is no longer generating electricity.

A recent decision by the Michigan Public Service Commission aims to help. Regulators voted last month to allow Consumers Energy to refinance the unrecovered investments with low-interest, ratepayer-backed bonds — a move expected to save customers $126 million over the next eight years and, at least indirectly, ease the shift away from coal.

It is the second time the PSC has approved such a refinancing to reduce costs related to unrecovered investments in shuttered coal plants.

The refinancing, known as securitization, is allowed in Michigan under a law adopted in 2000 as the state’s utility industry was undergoing a transition to deregulation. Today the financial tool is being used to help out with a different industry shift as utilities seek to replace older fossil plants with carbon-free energy.

And like a 1990s fad that’s suddenly cool again, securitization is a hot topic in statehouses across the country.

Twenty-five states plus Washington and Puerto Rico have securitization laws in place. The list includes Colorado, New Mexico and Montana, all of which passed legislation in recent years to allow for the refinancing of unrecovered coal plant investments.

Securitization legislation was pre-filed in Missouri last month, and bills are expected in Kansas and Minnesota in the coming weeks. The idea is also getting a close look in Indiana.

In each case, the policy is getting traction among consumer groups, utilities and environmental advocates alike, all of which see potential benefits.

"We need to address this issue of legacy investments and how to make the transition and do it in a way that creates a win for both investors and customers," said Ashok Gupta, a senior energy economist for the Natural Resources Defense Council.

Gupta became familiar with securitization working in New York 25 years ago, when the state was restructuring its retail electric market and grappling with how to handle so-called stranded costs — utility power plant investments that might go unrecovered in a competitive market.

Now in the Midwest, he’s advocating for adoption of the policy tool in Missouri and Kansas, states where the big utilities still own more than 10 gigawatts of coal-fired generation.

While NRDC’s primary interest is addressing climate change, Gupta stresses that securitization isn’t about shutting down coal plants. Rather, it’s a financial tool to more broadly manage costs and deal with industry transitions.

And in deep-red states, saving consumers money and improving the business climate is a better selling point than cutting carbon.

"This is near-term savings that you can create. You can get real benefits for consumers right now," Gupta said. "I’m willing to be the co-benefit."

Securitization has been used for years to help manage a variety of challenges in the utility industry.

In Florida, it was used to help blunt the rate impact when the grid was rebuilt following hurricanes in 2004 and 2005, and again years later to mitigate the effect of the early retirement of a Duke Energy Corp. nuclear reactor. The California Legislature more recently passed a bill to let utilities securitize costs related to COVID-19.

Securitization was also recently approved by the Wisconsin Public Service Commission to lower the costs associated with $100 million of unrecovered investments in We Energies’ Pleasant Prairie coal plant, which shut down in 2018.

While the topic of securitization has seized the attention of policymakers, supporters acknowledge it’s a complex issue.

It also is reemerging as legislators grapple with more pressing issues such as the pandemic. Also, getting utilities and consumer interests to sign off on details of securitization legislation is akin to threading a needle. A policy that too heavily favors one side or the other can be a deal breaker.

St. Louis-based Ameren Missouri and Evergy, headquartered in Kansas City, Mo., have previously opposed securitization bills in Missouri and in Kansas. But at least one of the utilities has since changed its stance.

"We believe there is a desire for this important tool and will be supporting securitization legislation this year in both states," Evergy spokeswoman Gina Penzig said in an emailed statement.

The utilities have proposed billions of dollars in renewable energy investments and are thought to be more receptive to the idea since accelerating retirements of older fossil units would create room for new capacity.

Warren Wood, a vice president for Ameren Missouri who oversees legislative and regulatory policy development, said the utility doesn’t need securitization to green its power mix over the next two decades. But he said it could be a "useful tool." If done right, "all of the parties can come out ahead," he said. "This is achievable."

It’s not just utilities that have warmed to the idea. Kansas’ top utility regulator has also weighed in to support securitization legislation, saying the policy had benefits for all utilities and consumers alike.

"Hopefully, everybody will sharpen their pencils and get serious about it," Kansas Corporation Commission Chair Susan Duffy said during an energy conference presentation last month.

A key for utilities, generally, is that they be allowed to share in the benefits by reinvesting at least some portion of the amount of rate base that’s wiped out — investments on which their shareholders can profit.

It’s a practice referred to as "capital recycling," and is a key consideration for utility shareholders.

David Woodsmall, a lobbyist for the Midwest Energy Consumers Group, whose members include some of the state’s largest commercial and industrial energy users, said utilities should be allowed to recover investments in power plants that are shut down ahead of schedule.

But allowing utilities to earn any kind of return on amounts that are securitized is a "deal breaker," he said.

In Minnesota, state Rep. Jamie Long (D), the incoming chair of the Energy and Climate Finance and Policy Division Committee, has been interested in the topic for a couple of years. He introduced legislation in the House last year. But a COVID-19-shortened session kept the bill from being heard.

Long plans to introduce a bill in the coming weeks to allow securitization, which he said can benefit consumers and also local communities that are home to older, retiring coal-fired plants and the associated workers who will lose their jobs.

"I think that’s a key piece of the clean energy transition," he said in an interview. "I’m definitely interested in reintroducing the bill and moving forward with a full hearing."

Minnesota has been a leader among Midwestern states in reducing its dependence on coal-fired generation. The state today has just four coal plants still running, and one of them — the 150 MW Hoot Lake plant — is set to shut down this year.

Two Xcel Energy Inc. coal plants totaling more than 2,700 MW are set to be retired between 2023 and 2028, and some of the existing units are operated seasonally as of last year.

But that could change. Minnesota Power is due to file its 15-year integrated resource plan with the state Public Utilities Commission on Feb. 1. The Duluth, Minn.-based utility, a unit of Allete Inc., became the first utility in the state to reach 50% renewable energy last month and is planning further steps to slash carbon emissions.

Along with it, Minnesota Power is required to file a study evaluating the potential for retiring Boswell early as well as the second phase of a study being conducted with the Rocky Mountain Institute (RMI) on the possible use of securitization if there’s a decision to shut down the plant. The first phase was filed in October.

Julie Pierce, the utility’s vice president of strategy and planning, said there are myriad considerations when looking at the plant’s future, not the least of which is reliability of the grid in the Upper Plains. Ratepayer impact is also key, she said.

As of last fall, there was $780 million left to be paid off on the Boswell plant from investments in pollution controls that were made as recently as 2015. Those unrecovered investments are just one of the challenges in retiring the plant ahead of schedule. Another: the impact to tiny Cohasset, Minn., and the surrounding area.

The Boswell plant represents about 70% of the city’s tax base and a significant source of revenue for the county and local school district.

Another challenge is the makeup of Minnesota Power’s customer base and the volatility of its revenue. A handful of taconite production plants and paper and pulp mills make up the bulk of its electricity sales, and several of those plants were idled during the pandemic.

"When you have a customer profile that ebbs and flows in big ways and has big swings, that makes it more difficult to manage a tool like securitization," Pierce said.

It’s not that securitization can’t work, but that it must be tailored specifically to the state and utilities involved, according to Pierce.

"It is not a one-size-fits-all type of tool," she said. "That’s why we really wanted to partner with RMI to look at it in the Minnesota context with our regulations, our statutes, our ratemaking."