Can a DOE-backed project help save the grid? 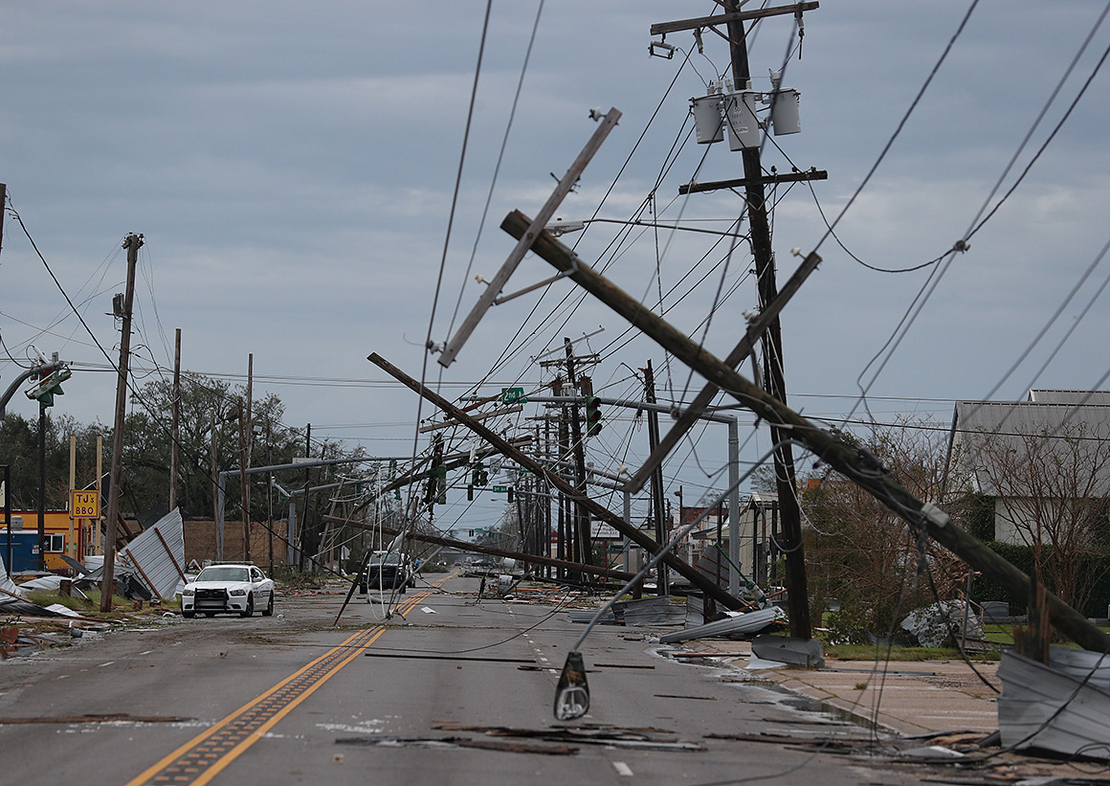 A street is seen strewn with debris and downed power lines after Hurricane Laura passed through the Lake Charles, La., area in August 2020. Joe Raedle/Getty Images

As the nation braces for a summer of drought, heat waves and hurricanes, a group of U.S. utility planners and scientists has begun investigating how power grids should be strengthened for a future of extreme weather that they believe will only get worse.

In the first of these studies, the Department of Energy’s Argonne National Laboratory will adapt forecasts of global climate change to predict how future weather threats are likely to hit Commonwealth Edison’s network of generators, power lines and substations that serve greater Chicago and more than two-thirds of Illinois.

It’s part of a three-year project led by the Electric Power Research Institute (EPRI) looking at potential future weather impacts that marks a sharp shift in focus for U.S. utilities. Previously, the industry’s forecasts and planning for weather impacts have generally looked at a few years ahead based on data of past weather history, Arshad Mansoor, chief executive at EPRI, said in an interview. A much deeper look is essential now, he added.

“We clearly are seeing the effects of the warming of the planet,” Mansoor said. “Our planning process does not take that into account.”

If the project leads utilities and regulators to plan for probable future threats to power systems from climate-related extreme weather, it could add new urgency to the debate over the nation’s clean energy future and sharpen decisions on dividing billions of ratepayer dollars between decarbonizing or defending the grid. The results may have implications in the nation’s capital as well as at the state level, where regulators directly oversee electric utilities’ spending decisions.

“The fact that we had downed transmission — steel structures that were blown down — that was really extraordinary,” Burg said in an interview. “If this is the new normal, we have to start planning differently to be ready,” he added.

ComEd’s parent, Exelon Corp., is one of more than a dozen utility companies participating in the research project, which ia called Climate READi and aims to shift grid planners’ focus from past weather events to the effects of unpredictable but increasingly probable future weather emergencies.

The study’s goal is to seek a scientific consensus on the frequency, severity and characteristics of extreme weather that is likely to strike U.S. regions in decades ahead, Mansoor added.

The project will advise power companies on using a cost-benefit analysis to manage climate risks and prioritize investment requests to regulators on how and where to harden their systems, he said. ComEd aims to complete its research in time to include findings in its early 2023 request to the Illinois Commerce Commission to approve a new, multiyear grid plan.

The EPRI project “plays an important role towards understanding the impacts that weather has on system planning and operations,” said Rachel Sherrard, a spokesperson for the North American Electric Reliability Corp. (NERC), responding to an E&E News request for comment.

Along with NERC’s long-term and seasonal assessments, the study results will support utilities’ planning, design and operation of a transforming grid, she added. Separately, the Federal Energy Regulatory Commission also is stepping up its focus on extreme weather preparations, including items related to the issue on its docket today.

The Department of Energy’s agenda also is developing a Regional Response Strategy “to improve planning and coordination before and during disasters,” the Government Accountability Office noted in a new review issued this month on DOE’s responsibility to help power companies recover from natural disasters.

GAO reported that DOE’s response focused on restoring power after disasters, “but was missing a system-wide planning approach that incorporates steps to enhance resilience to future disasters.”

The nation’s utilities are at very different levels of preparation for extreme weather, grid officials agree.

Con Edison’s analysis, backed by researchers at Columbia University, ICF International and Jupiter Intelligence, said the utility had to prepare to be hit from all directions: extreme heat, sea-level rise and coastal storm surge, flooding from intense rainfall, and hurricane-strength winds, Katherine Boden of Con Edison said at a briefing last year. She is now a senior vice president with the company.

“And none of this is really a surprise, as we’ve been seeing these scenarios emerging across our globe. What did come as a surprise was the intensity and frequency of the climate scenarios,” Boden added.

The analysis started with the consequences of a 2-degree-Celsius increase in average temperatures at midcentury, predicted by the Intergovernmental Panel on Climate Change, and then developed an even worse case “to make sure that we’re planning for the future and not just looking back at history,” Boden said.

“The science and our analysis are telling us that by 2030, we could have 11 days of extreme heat on average each summer. By 2050, that number could rise to 23 days, almost one-third of the summer,” she added.

Along with the potentially mortal danger to city residents without air conditioning, extreme heat shortens the life spans of transformers and escalates peak power loads on its system.

“We could see a rise of 1.3 feet over the next 30 years, and that’s compared to less than 1-foot [sea-level] rise over the previous 30 years, which is a bit scary and certainly extreme,” Boden said.

The forward-looking analysis by Con Edison was not matched by most power generator and gas system operators before outages from Winter Storm Uri in February 2021 cut off power to millions of Texans in the region managed by the Electric Reliability Council of Texas (ERCOT).

More than 240 deaths were tied to the winter storm, according to Texas authorities.

An investigative report by FERC and NERC, issued last November, concluded, “The extent to which the Event was caused by the failure of all types of generating units to prepare for extreme cold weather or associated freezing precipitation, cannot be overstated.”

The report noted that cold weather planning in Texas has been based on historical sampling or averages of past weather that included multiple years of mild weather, and few cold weather impacts.

Electric power and gas operators and regulators failed to respond to a severe freeze and power outage in 2011 that revealed the need for much strong preparation for extreme cold, the FERC-NERC report said.

“ERCOT should broaden its use of scenario analysis with more aggressive worst-case outcomes,” the report recommended. “ERCOT should design and explore multiple climate change and extreme weather forecasts and demand scenarios in combination with multiple compound failures per event.”

Speaking last month at the annual convention of the American Council of Engineering Companies, he said the threat of severe heat waves and extended drought demands attention now.

Most U.S. electricity today is generated by “thermal” power plants, which use heat from fossil fuels or nuclear reactors to produce steam that drive turbines. In worst-case scenarios, severe heat waves can leave river or lake water too hot for power plants to use, and drought will lower water levels below power plants’ intake pipes, he said.

“A lot of our thermal plants are likely to be in jeopardy in 20 years,” Bochman said.

Disaster planners focus on so-called low-frequency, high-impact events, the rare catastrophes that can be planned for, he said.

“When we get to the point of having high frequency and high impact, we’ll be running around. The time for really intelligent, structured analysis will be over, and we’ll just be scrambling. And nobody wants to live in that kind of world, but that’s the one we’re headed to unless we use this time” to prepare, he said.

Bochman said planners must identify the highest-priority energy assets most important to U.S. national security, economic security and public health — “those things that absolutely must not be allowed to fail.”

“There is a major need for speed,” Hempstead said. Energy companies can’t be “looking in the rearview mirror about what the weather has been. They need to be making investment … on what the weather is going to be.”

Daniel Brooks, EPRI’s vice president for integrated grid and energy systems, said there is a lot of uncertainty.

“It’s one thing after a particular event, after [Hurricane] Ida, after Sandy, to be able to justify some investment,” he said in an interview. “But [now] you’re talking about chronic effects over the long term that need to be looked at today, because the assets we’re building today have 40-, 50-year lifetimes.”

There are two pieces of a long-term look, according to Julie McNamara, a deputy policy director at the Union of Concerned Scientists. One is the need to protect against increasingly dangerous extreme weather, she said, and the other is continuing the transition to a clean energy grid to try to reduce future threats.

“It’s that long-term assessment that’s so important. So often, we see utilities that react,” McNamara said in an interview. “A disaster has come, and the power has to come back on. So often, they are just rebuilding as it was. That misses an enormous opportunity to rebuild for a more resilient future.”

She said the current power grid doesn’t match what’s required for a clean energy transition — a need for upgrades has been seen for decades.

“That bill is coming due all across the country,” McNamara said.

When President Joe Biden ordered the United States to rejoin the Paris climate pact, he set a goal of reducing carbon emissions across the U.S. economy 50 to 52 percent from 2005 levels by 2030.

Hitting that target would require tripling the current pace of greenhouse gas reductions, as noted in a new paper in Science by researchers affiliated with the Natural Resources Defense Council, the Bezos Earth Fund, the University of Maryland, Lawrence Berkeley National Laboratory, Pacific Northwest National Laboratory, and the MIT Joint Program on the Science and Policy of Global Change.

The Science paper cited estimates that incremental costs of decarbonizing the grid could exceed $100 billion a year. Investments of that magnitude will test the support of ratepayers and regulators, McNamara said.

“A lot of utilities have over many years lost the trust of ratepayers and consumer advocates by putting forward proposals that have limited value to ratepayers,” McNamara said.

If they want to avoid familiar complaints about “gold-plating” power company investments, utility planning for an extreme weather future must be open to the public, she added.

“Everybody should be able to see the assumptions, to check their validity … that goes for long-term deployment,” McNamara said. People will need “to get in under the hood,” she said.

Correction: An earlier version of the story misstated the purpose and filing deadline of ComEd’s multiyear grid plan.