Can a new FERC grid planning proposal succeed in the South? 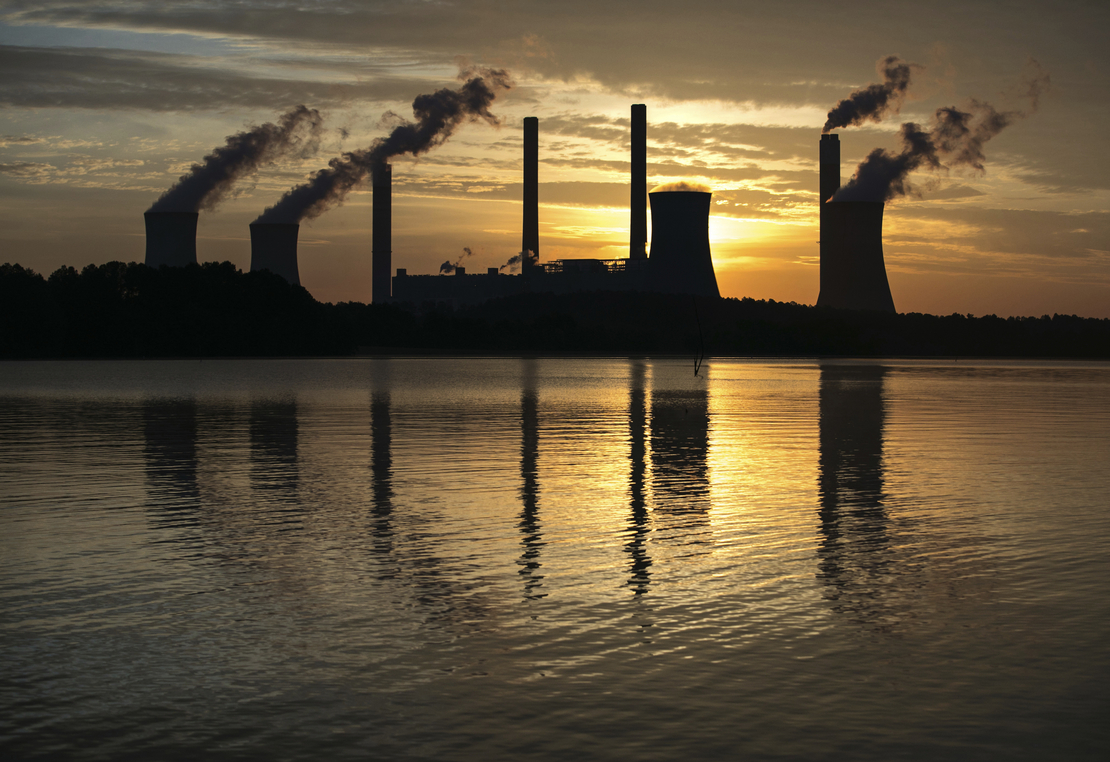 The coal-fired Plant Scherer stands in the distance in Georgia in 2017. AP Photo/Branden Camp, File

A federal proposal intended to jump-start development of long-distance power lines is fueling a debate in the Southeast, where clean energy advocates say limited grid planning may be stalling the move away from fossil fuels.

The draft — proposed earlier this year — is facing pushback.

The argument goes that utilities have built many smaller, local lines that have boosted renewable energy and made the grid more reliable. Some have also expressed that certain FERC transmission mandates may be ill-suited in Southeastern states such as Georgia and North Carolina, where there is no centralized grid planner as is present in several other regions.

Environmental groups take the opposite position: FERC’s proposed changes are especially needed in the Southeast. Advocates argue that transmission planning in the region hasn’t kept up with the rise of solar power, making it harder to replace aging fossil fuel plants with clean energy that could save consumers money.

“We have got to proactively plan the transmission system so that we can cost-effectively bring on renewable resources and close more expensive existing fossil generators,” said Simon Mahan, executive director of the Southern Renewable Energy Association.

At the heart of the issue are different frameworks for transmitting electricity across the United States. The Southeast and parts of the West aren’t covered by a regional transmission organization, which in other regions provides a forum for utilities, states and others to collaborate on regional transmission needs.

The Southeast Regional Transmission Planning organization is run by the region’s largest utilities and doesn’t have independent oversight, as do regional transmission organizations (RTOs).

“In the Southeast and in portions of the West, there’s very little independent input into this planning that goes on there, simply because there’s no independent entity that oversees the planning,” said Jon Wellinghoff, a former Democratic chair at FERC. “As long as those regions continue to be located in areas that are not under an independent planning process like the RTOs, I think there will be very little progress that happens.”

Tony Clark, a former Republican FERC commissioner, countered that transmission planning may be working as well in the South as in other parts of the country. Ultimately, he added, the commission will need to prove that something isn’t working — not just in the Southeast, but nationwide — for its planning proposal to be on strong legal ground.

“Different regions, just by nature of a whole number of different factors, have seen a different type of [infrastructure] build-out or pace of build-out,” Clark said.

In written statements, Southern and another major Southeastern utility, Duke Energy Corp., said they support some aspects of FERC’s proposal or its stated intention. Duke spokesperson Ben Goldey said company leaders “applaud FERC for taking action” and are in favor of considering the changing energy resource mix as part of transmission development. But Duke — which serves 8.2 million customers in North Carolina, South Carolina, Kentucky and elsewhere — is wary of FERC attempting to dictate how transmission should be built, he said.

“Focusing on process, and not dictating project selections or cost allocations, will facilitate consensus needed to support state siting and other critical approvals,” Goldey said.

Southern, meanwhile, supports building grid infrastructure for renewables and long-haul transmission lines “in areas of the country where it makes sense for customers,” said Schuyler Baehman, vice president of communications for the company. Southern has 9 million customers served by subsidiary companies in Georgia, Alabama, Mississippi and elsewhere.

“We want to ensure that FERC’s proposal does not make changes at the expense of our state commissions’ jurisdiction or result in higher prices for our customers,” Baehman said.

This isn’t the first time FERC has grappled with how much to prod utilities on regional planning for power lines.

More than a decade ago, FERC — during Wellinghoff’s tenure — sought to address similar alleged deficiencies in transmission planning, partly in response to the rise of state-level renewable energy standards. The ensuing FERC rule, released in 2011 and called Order 1000, was cheered by the clean energy industry at the time.

But analysts now say that Order 1000’s impact has been a mixed bag for transmission and renewables. Put simply, it has become clear that some regions “embraced” regional transmission planning, while others have “done as little as humanly possible” to comply with FERC’s directive, said Shelley Welton, professor of law and energy policy at the University of Pennsylvania Carey Law School.

“FERC told them to plan already in Order 1000, and they just kind of didn’t,” Welton said of the Southeast and other regions. “So now FERC is telling them a little more sternly with a little more prescriptiveness, ‘Really, we meant for you to plan together.’”

She added, “I guess one question I have is: How much are the states going to see themselves getting out of this?”

FERC’s new proposal, issued in April, attempts to tackle several issues that have bogged down transmission development before and after Order 1000.

First, the proposed new rule would require utilities and grid operators to look ahead 20 years when considering their transmission needs, while factoring in public policies and the changing resource mix. They’d also need to establish transparent methods for how transmission projects are selected and paid for by customers, as well as consider a wide range of potential benefits from regional lines.

FERC also proposed that utilities and grid operators try to get agreement from states as to how to pay for multistate lines. And utilities would need to consider using technologies that could make the power grid more efficient, among other changes (Energywire, April 22).

Some RTOs and similar entities have already begun doing the type of transmission planning suggested in FERC’s draft plan, said Johannes Pfeifenberger, principal at the Brattle Group, a consulting firm.

Still, as FERC considers a final rule, the commission will need to balance its desire to let regions implement changes as they see fit, while being specific enough to fix inefficiencies or roadblocks in transmission development, Pfeifenberger said.

Whether FERC will strike that balance might not be immediately evident. After the commission finalizes a new rule — and assuming it can withstand legal challenges — utilities and grid operators then must propose how they’re going to comply with it.

In the case of Order 1000, utilities’ compliance plans were where some of the shortcomings emerged, Pfeifenberger said.

“Unfortunately, that flexibility, in response to Order 1000, has been used by at least some regions to say, ‘We’re already doing that and don’t need to change,’” he said. “I recall looking at some of the Order 1000 compliance [filings] and thinking, ‘This will never work.’ And some of it really didn’t.”

Southeast environmental advocates have pointed to Georgia to highlight how they see transmission planning falling short.

Georgia Power — a subsidiary of Southern and the Peach State’s largest electricity provider — finalized a plan in July summarizing its energy investments and needs for the next 20 years. The statewide plan included new investments in natural gas and renewable energy, as well as some coal plant retirements within the next six years.

During the Georgia Public Service Commission’s review of the plan this past spring, a Georgia Power official told the regulators the company could not retire two of its coal units before 2035, in part because of “significant transmission” that had not been built to link up new resources. One observer of the plan — a consultant retained by Georgia Public Service Commission staff — testified that the company’s transmission plans were a “flaw” that should have been addressed years earlier.

The consultant, John Chiles, said in a recent interview that Georgia Power is now working to build more transmission so it can incorporate solar and retire costly coal plants.

“It’s fair to say that there’s still additional planning that needs to be done to address the retirement of generation and addition of renewables in the state of Georgia,” said Chiles, principal of transmission services at GDS Associates Inc. “I’m personally hopeful that Georgia Power will move forward and develop more transmission in the future to do that, because that’s part of their [latest] plan.”

A Georgia Power spokesperson did not answer a list of questions about its resource plan. But in a June press release, the company said it had developed a wide-ranging strategy to transform the state’s energy sources and ensure that the network of power lines and grid infrastructure “continues to deliver reliable energy to Georgians — both today and in the future.”

Outside of their energy resource plans, many utilities participate in the Southeastern Regional Transmission Planning (SERTP) forum. The group meets once per quarter with the goal of allowing utilities and interested parties to engage with each other on issues affecting their respective transmission plans.

At a typical meeting, utilities will present “local” transmission plans within their own service territories, said Nick Guidi, an energy attorney at the Southern Environmental Law Center. Then, they’ll consider potential regional transmission lines that could work instead of the smaller, local ones.

But no regional power lines have ever moved forward, the utility sponsors of the process have acknowledged. Unlike in some other regions, the SERTP analysis mostly compares different projects’ economic costs, without consideration of other potential benefits of high-voltage transmission, Guidi said.

“In theory, at least, there’s a process by which the utilities get together in the Southeast, but it has not led to the development of any long-distance line,” added Joel Eisen, a law professor at the University of Richmond.

In comments to FERC, utility sponsors of the Southeastern Regional Transmission Planning forum pointed out that they also conduct transmission planning in conjunction with their state utility regulators. They described their planning process as a “bottom-up” approach, adding that they have collaborated with each other on power system and grid planning issues.

“[The] SERTP region has an expansive and robust collective transmission system, high integration of clean resources, high customer satisfaction and reliability, and low electric rates relative to other regions,” the utility sponsors said in a comment last month.

Kimberly Duffley, a commissioner at the North Carolina Utilities Commission, suggested that the large geographic footprint of many Southern utilities necessitates a different framework there. Specifically, “local” power lines — within one utility’s service territory or a single state — may be close to the size of typical “regional” lines elsewhere in the United States, she said.

“I do think the [rule] will provide benefits to RTO regions and non-RTO regions, but nonprescriptive rules are appropriate,” she said.

FERC’s proposal is expected to be finalized in the coming months, although it could change significantly from its draft version.

In the meantime, the Southeast will continue to see changes in its energy resource mix, particularly a continued rise in solar energy, the University of Pennsylvania’s Welton said. Now, she said, the question becomes whether the process for building transmission needs to evolve with those changes.

“For a long time, the Southeast has assumed the model is working for them and nothing is broken, so why fix it?” Welton said. “I think the big question is, is that still true?”