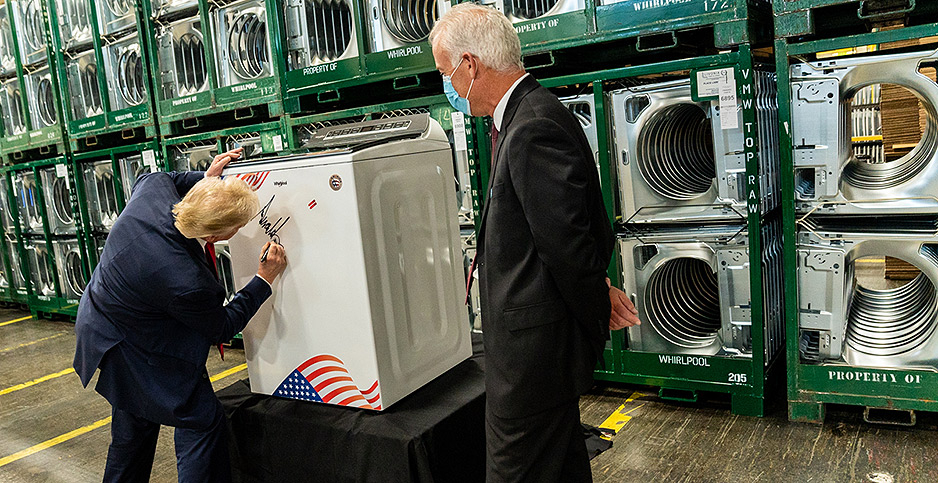 President Trump autographs a washing machine during a tour of a Whirlpool factory in Ohio. Shealah Craighead/The White House/Flickr

President Trump’s outreach to suburban voters in recent weeks has included warnings about low-income housing, the Green New Deal and efforts to defund the police.

They said they see a political motive in the Trump administration’s recent effort to roll back water efficiency standards for showerheads.

Before the coronavirus pandemic took hold, Trump often would complain at his political rallies about weak-flowing showers that didn’t properly clean his "beautiful hair" or modern toilets that needed to be flushed 10 times.

And, on at least one occasion, female voters were his intended audience.

"Remember the dishwasher? You’d press it, boom! There’d be like an explosion," Trump said at a Michigan rally in December. "Now, you press it 12 times. Women tell me … you know, they give you four drops of water."

That approach aligns with other appeals Trump has made recently to women, notably suburban women.

But critics say his strategy, which carries strong undercurrents of racism and misogyny, has the potential to backfire.

"The ‘suburban housewife’ will be voting for me," Trump wrote yesterday on Twitter. "They want safety & are thrilled that I ended the long running program where low income housing would invade their neighborhood."

"Do you think Suburban Women want to Defund the Police? I don’t think so," wrote Trump in a different Twitter post in June.

Trump’s appeals come amid signs that he is badly losing the vote of suburban women — a demographic he likely will need for reelection.

An NPR/"PBS NewsHour"/Marist poll from June found that 66% of suburban women disapproved of Trump, including 58% who "strongly disapprove."

One climate activist said Trump’s efforts to turn appliances into a campaign issue wouldn’t help with this crowd either.

Instead, women — including Republican-leaning women — could interpret his actions as evidence he has no plan to address climate change, said Lauren French, a spokeswoman for Climate Power 2020, which is working to elect climate advocates in races across the country.

"When you start talking about energy ambition, toilets, showers, washing machines, it just brings more attention to the fact that Trump is completely abdicating his responsibility to care for our country’s future, our children’s future when it comes to the climate crisis," she said. "He’s actively making the crisis worse."

He said the fact that Trump is talking about faucets and showers again is a sign that Trump is trying to remind voters of the time before COVID-19, when the economy was booming and people had the luxury of fretting about showers and dishwashers.

"It’s an important issue for everybody," he said. "The home is where you live, and you really want things to work, you want your clothes to get clean, your dishes to not have spots, for the toilets to not be embarrassing, and you want to have a satisfying shower in the morning."