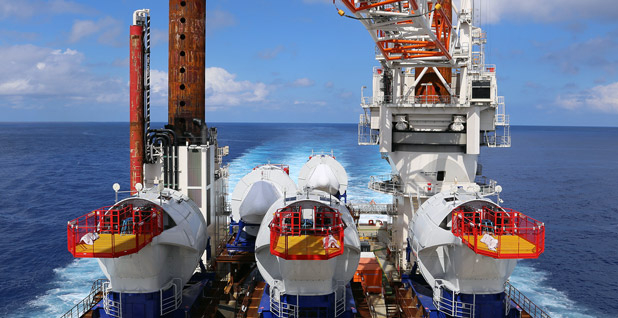 Nacelles, one of the most valuable parts of a wind turbine, travel from France to the Block Island wind project off Rhode Island. Photo courtesy of Fred. Olsen Windcarrier via Flickr.

When the United States’ first-ever offshore wind farm goes online later this year, it will have plenty of American fingerprints.

The project used four ports in Rhode Island and 300 local workers. The turbines themselves came from General Electric Co.

Their most complex and valuable parts, however, came from Europe.

To build the five turbines for the Block Island Wind Farm, just off the Rhode Island coast, GE called on factories in France, Spain and Denmark.

"Over time, I think we’d like to see elements of the turbines made and assembled here in the U.S. more and more," said Jeffrey Grybowski, CEO of Deepwater Wind, which is the developer of the project. "It’s not an all-or-nothing thing. We’ll increasingly see more and more of the components made closer and closer to these projects. And that is almost entirely driven by the size of the market that the manufacturers see.

"If they see a large market in the U.S. and the opportunity to serve that market better by locating their facilities closer to the projects, then they’ll start building facilities here," he said.

After a decade in which the United States failed to build offshore wind, some Northeast states are redoubling their efforts. Rhode Island, Massachusetts and New York are among those giving fresh policy supports to offshore wind. They frame it a way to cut carbon emissions and create jobs.

The question is how many of those jobs will need to be here, given Europe’s advantage.

For a sense of scale: GE sold five Haliade turbines for Block Island. It is supplying 238 units for wind farms in France and another 66 for sites in Germany. They will come from European factories that GE acquired last year.

GE is moving its headquarters from Fairfield, Conn., to Boston. But its largest rivals in offshore wind, such as Siemens AG and Vestas Wind Systems A/S, are based in Europe.

If you build it, will they come?

Wind advocates say if the United States wants an industry, it needs to show it’s willing to build at large scale.

There are over a dozen wind manufacturing facilities in Rhode Island, Massachusetts and Connecticut, according to AWEA. But these are geared to the onshore wind industry, which is well developed in the United States.

Offshore turbines differ from the land variety. They’re bigger. They have to take more abuse. They must need as little maintenance as possible, since it’s expensive to send repair workers.

So GE built to spec in Europe. The turbines’ generator and nacelle, which make up the hub of the windmill, came from its factory in France. The tower came from Spain. The blades came from Denmark. The parts traveled to Rhode Island by sea.

Grybowski declined to say what share of the Block Island project is U.S.-made.

"It’s, in a sense, like an automobile," he said. "No one manufacturer makes all the components. GE is sourcing components literally from all over the globe and assembling all those components in one place."

The turbines’ foundations, which attach them to the ocean floor, were built in the Gulf of Mexico and Rhode Island. Each one uses over 1,500 tons of steel, he said, and building them is labor-intensive.

More than 300 local workers are involved with building the Block Island project, according to Deepwater Wind.

Grybowski said U.S. companies have the ability to compete on making the blades for the turbines. Asked if he could buy one in the United States today, he said, "There’s no place in the U.S. that makes offshore blades."

The Block Island project follows the 13-year odyssey of Cape Wind, a project off the Massachusetts coast that was once expected to be the United States’ first offshore farm. Cape Wind’s opponents called it too expensive and an eyesore. Last year, its anchor customers pulled the plug.

But offshore wind supporters say today’s turbines have come a long way. They are taller, generate more power and are strong enough to stand well beyond the beach view.

What about cost? Offshore wind is still about twice as expensive as the average power source, according to Bloomberg New Energy Finance. And it’s the most expensive of any renewable energy technology.

But power prices are so high in dense parts of the Northeast, supporters say, that offshore wind can still pencil out.

That has opened a window for coastal states to throw their support behind it. Last month, Mass. Gov. Charlie Baker (R) signed a bill that would require the state’s utilities to buy at least 1,600 MW of offshore wind in the next decade. The world’s biggest developer, Denmark-based DONG Energy, opened an office in Boston last year.

The real prize may be in New York, off the coast of Long Island. State officials estimate 39 gigawatts of potential more than 12 miles offshore. That’s a bit more than half of all the wind capacity built in the United States today.

"Folks watching this industry have often referred to New York as the sleeping giant of offshore wind," said Catherine Bowes, a senior manager at the National Wildlife Federation. "There are tens of thousands of megawatts to be had off the coast of New York. And developers are, like, itching to make it happen."

Gov. Andrew Cuomo (D) has set a state goal of 50 percent renewable electricity by 2030. His top energy official, Richard Kauffman, told Bloomberg, "We are not going to be [able to] achieve our 50 percent goals by 2030 without offshore wind."

Indeed, there may be no other way to get renewable energy to New York City and Long Island, which together use almost half the state’s electricity but are constrained in building new power lines.

Officials think offshore wind could be a shortcut. The Long Island Power Authority, a state-operated utility, is in the advanced stages on a proposal for a 90-MW wind farm 30 miles into the Atlantic. Deepwater Wind is the developer.

And state officials are bidding on federal waters south of New York City, with the aim of completing a project as soon as 2019.

The Cuomo administration is developing an offshore wind "master plan" that it hopes will encourage investment, reduce the technology’s cost and create jobs.

Deepwater Wind has claimed its project off Long Island will be able to compete on price with fossil fuels, toe to toe.

After that, Grybowski has grander plans.