Can any Democrat run as ‘the climate candidate’? 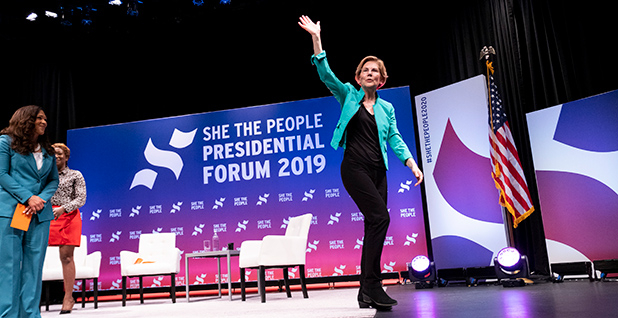 Democratic presidential hopefuls are getting competitive with one another over plans to fight climate change.

In recent weeks, numerous candidates in the crowded, 22-person field have put out competing climate policy proposals that go beyond the Green New Deal. They differ in timing, ambition and the role of various fuel sources, each arguing his or her ideas are the best.

The debating is pushing climate closer to the political forefront, while challenging candidates to talk more about the issue and come up with better ideas.

And it’s happening despite congressional Democrats’ reluctance to take bold climate action, preferring instead to take on small-ball legislation such as the bill to stop President Trump from removing the United States from the Paris climate accord.

"I think a primary season where we see the candidates get on stage and try to out-climate each other is an amazing world to live through. And I think that there’s a good chance, judging by the last few months, that that’s the situation we’re headed into," Julian NoiseCat, policy analyst at 350 Action, told E&E News.

350 Action is the advocacy arm of 350.org, an outspoken activist climate group. "In the history of climate as a political issue, that is historic," NoiseCat said.

Among the climate proposals is a public lands agenda Sen. Elizabeth Warren of Massachusetts rolled out last month that would put an immediate ban on all new fossil fuel leases on federal land.

Sen. Cory Booker of New Jersey called last week for a significant boost to enforcement resources and fees at EPA as part of an environmental justice mission.

And former Rep. Beto O’Rourke of Texas came out with a wide-ranging, $5 trillion climate proposal this week that includes an international climate pact more stringent than the Paris Agreement and a ban on federal land leasing.

The climate competition has at times bordered on combative. Washington Gov. Jay Inslee took O’Rourke to task this week over his climate plan and his record on the matter, saying O’Rourke "will need to answer why he did not lead on climate change in Congress and why he voted on the side of oil companies to open up offshore drilling."

O’Rourke took in more than $500,000 in contributions from oil and natural gas industry workers in his unsuccessful 2018 Senate run. It made him the No. 2 recipient nationally for oil and gas contributions, behind Sen. Ted Cruz (R-Texas), his opponent.

But O’Rourke flipped on fossil fuel donations this week, signing the "No Fossil Fuel Money Pledge," under which he promised not to take donations of more than $200 from industry executives or lobbyists (E&E Daily, May 2).

"Climate change needs to be the top priority of the next president. And we will not defeat climate change with empty rhetoric, borrowed rhetoric, or by taking fossil fuel money," Inslee said in a statement, made before O’Rourke’s change of heart, that pointed to accusations against O’Rourke.

Inslee has not yet rolled out specific green policy proposals beyond general statements of priorities but is expected to roll out the first of many parts of his climate plan today.

He has promised a plan that "will give us 100% clean electricity and a transportation system that is clean, and a building sector that does what we’re doing in our state, which will be very concrete and specific proposals."

The fierce competition over climate policy is new in presidential politics. It comes amid reports from places such as the United Nations Intergovernmental Panel on Climate Change and the federal government that outline increasing urgency to fight climate change.

There is also increased political attention to the issue, including the Green New Deal, an ambitious proposal for a rapid move away from fossil fuels that all of the senators in the race have endorsed and others have cheered.

"In terms of the salience of climate politics in the presidential election, I don’t think we’ve seen this level in the last 20 or 30 years, which is certainly very important from the climate front," Aseem Prakash, director of the Center for Environmental Politics at the University of Washington, told E&E News.

"To a certain extent, the credit goes to Alexandria Ocasio-Cortez, because she has put climate issues on the center stage, especially through the Green New Deal," he said, referring to the freshman Democratic congresswoman from New York who has made climate change one of her signature issues. She is a lead co-sponsor of the Green New Deal, along with Sen. Ed Markey (D-Mass.).

Trump’s actions are also fueling the climate competitiveness. He has worked to roll back nearly all of the federal government’s climate policies and has continued to express doubt that climate change is being caused by human activity.

It comes as climate is reaching a level in the national consciousness that hasn’t been seen before. In a poll released by CNN this week, Democratic voters ranked "taking aggressive action to slow the effects of climate change" as the most important issue for a presidential candidate to support, with 96% of respondents ranking it "very" or "somewhat" important.

The League of Conservation Voters is relishing the increased attention. The group thinks it will help ensure that the Democratic nominee is progressive on climate change and that voters in both the primary and general elections make their choices based on climate policy — which LCV thinks will lead to Trump losing.

"It’s great to see that candidates are competing with each other over who has the most ambitious, most effective, biggest, best plan to combat the climate crisis," said Tiernan Sittenfeld, senior vice president for government affairs at LCV.

"It’s exactly what we need to see, because it could not be more important that the eventual nominee both runs on climate change, talks about it and prioritizes it on the campaign trail. Have it be one of the reasons that he or she defeats Trump, and then be ready to go on Day One in the Oval Office."

But despite the talk, the Democratic candidates still have work to do if they think they can beat one another on climate, Prakash said. Everybody supports fighting climate change and denounces Trump.

"Part of the problem is that everybody is pro-climate. I don’t see how they can differentiate one from the other," he said.

Given that, Prakash predicted issues such as expanding health care coverage, gun safety and immigration will be the bigger differentiators as the Democratic campaign goes forward.

"I don’t really think Democrats will be able to run on the climate ticket at the primary stage," he said.