Can Biden expand gas and zero out emissions? 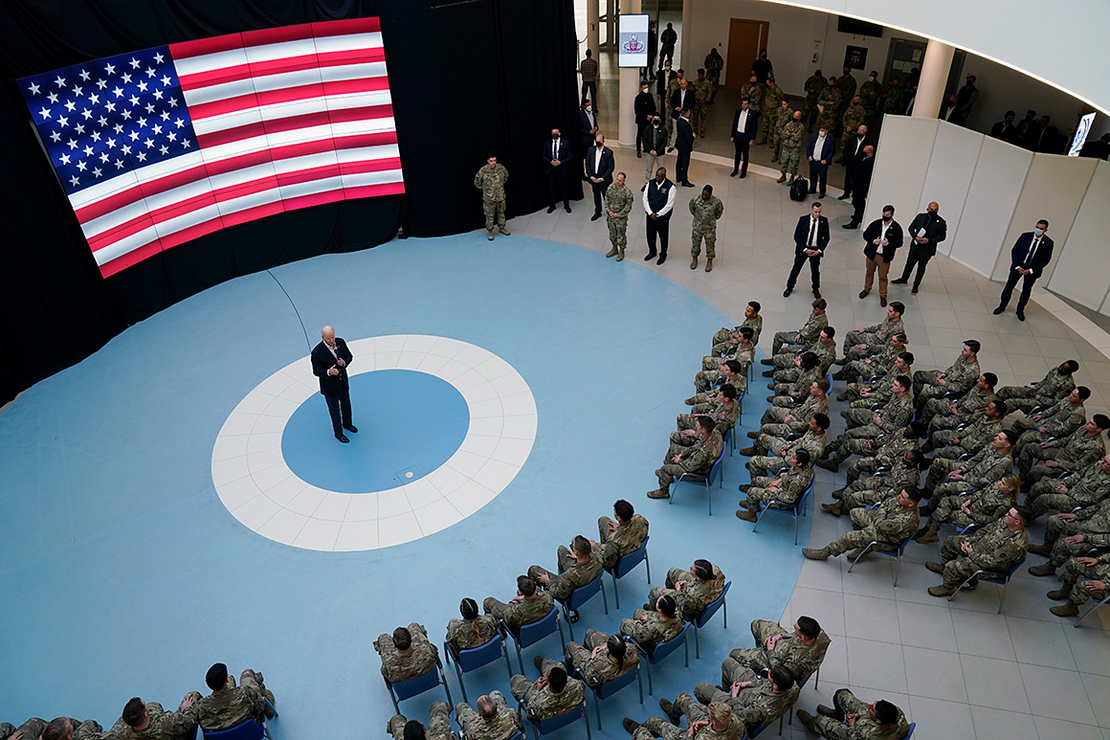 But the bilateral announcement was riddled with so much ambiguous language and lacked so many specifics that none of those outcomes is assured.

In an effort to wean the European Union off Russian gas as Russia’s invasion of Ukraine enters its second month, the United States agreed last week to work with “international partners” to “strive to ensure” that 15 billion cubic meters of additional LNG travel to E.U. ports this year.

U.S. LNG shipments to Europe have doubled in recent months, but facilities are at capacity. A senior White House official told reporters on a call Friday that achieving the 15 bcm target this year would involve continued exports from the United States and agreements by other countries and regions — particularly Asia — to supply more LNG.

The European Union further promised to work with its 27 member states “toward the goal” of ensuring demand for 50 bcm a year of U.S. LNG at least through 2030.

The deal hints that the United States would play a role in displacing about a third of the gas the European Union currently buys from Russia through the end of the decade — weakening that country’s leverage over European economies and depriving it of money that could be used to fund its military.

The commitment is overlaid with promises by the United States and the European Union to uphold their shared commitment to the Paris Agreement, as well as the twin goals of “achieving the objective of net zero emissions by 2050” and keeping climate warming to the 1.5-degree-Celsius limit recommended by scientists. That last objective demands a rapid global movement away from unabated fossil fuel use by 2030.

The Biden administration has promised that the United States would cut its overall greenhouse gas emissions by 50 to 52 percent by 2030 compared with 2005 levels — a pledge known in Paris Agreement parlance as its nationally determined contribution, or NDC.

It has further promised that the U.S. economy would contribute no net emissions by 2050. Under international climate accounting rules, only emissions released in the United States are counted toward those goals, not those associated with activities that take place outside its borders even as a result of American actions.

So bunker fuel for shipping LNG won’t appear on any of the U.S. emissions inventories the State Department submits to the U.N. climate body each spring. Neither will emissions — or emissions savings — from U.S. gas burned in Europe or displaced, dirtier Russian gas.

“Concerns such as lock-in of LNG import infrastructure in Europe or emissions from LNG tankers crossing the Atlantic Ocean don’t affect progress toward the U.S. NDC, even if they affect global emissions,” said Jeffrey Rissman, industry program director at Energy Innovation.

So the effect of Friday’s deal on Biden’s 2030 Paris commitment or the longer-term decarbonization goal hinges on whether it helps drive a boom in U.S. gas production and exports. LNG undergoes an energy-intensive liquefaction and cooling process before it can be transported.

A White House fact sheet on the agreement and public statements by officials Friday leave key questions unanswered about how much, if any, of those exports would be new and additional.

With U.S. LNG exports so near capacity, this year’s 15 bcm commitment would be satisfied by redirecting shipments that otherwise would have been delivered to other countries and persuading other suppliers to do the same.

White House national security adviser Jake Sullivan said as much in a press gaggle on Friday.

The effect on U.S. emissions of selling gas to one purchaser versus another is nil.

“Rerouting shipments doesn’t affect U.S. natural gas production or domestic emissions, so it has no effect on U.S. NDC progress for the next two to three years,” Rissman noted.

Additional emissions would come from more production and exports. Friday’s announcement promised steps to reduce the emissions intensity of the exports — or the amount of carbon emitted per unit of energy exported.

It set up an E.U.-American task force to look for ways to limit methane leakage from all new LNG infrastructure, encourage the use of clean energy to power on-site operations, and build pipelines that are capable of transporting hydrogen to facilitate an eventual conversion of infrastructure to cleaner-burning technologies.

Independently of Friday’s announcement, EPA is expected to finalize rules next year that would crack down on emissions from both new and existing oil and gas production, processing and transmission, which could reduce the greenhouse gas intensity of the U.S. product.

Natural gas representatives stressed the industry’s support for methane policies on both side of the Atlantic Ocean.

“We’re in. We’re all in,” Fred Hutchison, president and CEO of LNG Allies, said in a statement on the deal.

But environmentalists noted that nothing in Friday’s memorandum hints at new and additional regulations that might erase the climate consequences of more production and export. Even if the U.S. industry succeeds in reducing the emissions intensity of its product, absolute emissions would grow unless leakage across the system are brought to zero.

The application of full carbon capture, utilization and storage at all new LNG facilities could help, and senior Biden administration officials, including Energy Secretary Jennifer Granholm, pointed to that potential on Friday. But companies are unlikely to outfit their terminals with the costly technology without a regulatory requirement for them to do so.

Leakage rates for U.S. natural gas systems and LNG are relatively high compared with rates in many other countries, though not Russia.

A study by the Environmental Defense Fund puts the likely national leak rate at 2.3 percent. A 2020 analysis by the Natural Resources Defense Council estimates that over a 20-year time horizon, the methane emissions from U.S. LNG have only about a third less climate impact than coal.

If American LNG exports increase to 6 trillion cubic feet of gas by 2030, as they are projected to do, NRDC’s analysis states that the additional emissions that would result could be enough to erase the annual 1 percent decline in U.S. emissions that was recorded in the decade ending in 2020.

But questions abound over whether Friday’s deal would incentivize new and additional production and export of gas.

LNG exports are expected to continue to grow this year after hitting a record high last year. Two new export facilities will come online in the next year or so, though they were planned long before Russia invaded Ukraine.

More new capacity won’t be added until the middle of this decade. Hutchison of LNG Allies told E&E News that he hopes Friday’s announcement signals that European companies are preparing to sign long-term contracts directly with U.S. LNG projects for the receipt of gas. Ten prospective projects have received all the needed permits from Department of Energy and FERC, he said, and contracts would help them get built.

The E.U.-U.S. deal isn’t a purchase agreement, and its wording isn’t even very firm. The fact sheet states that the “European Commission will work with E.U. member states toward the goal of ensuring, until at least 2030, demand for approximately 50 bcm/year of additional LNG” (see related story).

A company looking to bring new capacity online in the mid-2020s that requires a 20-year return might find little to like in a promise that only extends about half a decade.

“Purchase through 2030 might not seem compelling to project developers evaluating final investment decisions (or their financiers),” noted Kevin Book, a managing director of Clearview Energy Partners LLC. “Marketers might jump in, betting that demand would continue beyond 2030, however.”

But Hutchison struck a much more optimistic tone.

“It is our assumption that the market will continue to take all the volumes we can produce at least until 2050,” he said. “And one of the things which we keep emphasizing, and the Europeans have paid a lot of attention to, is that if they don’t need LNG in 15 years or 20 years, then they can sell it to China or India, because China and India are going to be way behind — and the rest of the developing world: sub-Saharan Africa, Southeast Asia, South Asia … they’re going to be buying massive quantities of LNG for 30 or 40 years.”

While global emissions don’t appear in the U.S. emissions inventory or count toward the U.S. NDC, climate policies abroad can influence the United States’ emissions trajectories if they affect demand for U.S. fossil fuels.

European leaders now are crafting a policy to end the European Union’s dependence on Russian gas before 2030. The plan includes stepped-up measures to reduce demand. E.U. nations also are legally bound by the bloc’s pledge to cut greenhouse gas emissions 55 percent by 2030 emissions compared with 1990 levels.

“I think you’ll see that the E.U. is on a trajectory for little to no gas in their system by 2030, and definitely none way before 2050,” he said. The E.U. carbon budget still needs to shed emissions elsewhere in the economy to meet its Paris goals, he said, so it can’t accommodate more gas.

“If they’re assuming they’re going to get a 20-year commitment from Europe, then, you know, I question their economics and their sense of the politics in Europe,” he said of U.S. LNG exporters.

Schmidt also said that NRDC analysis shows that existing LNG facilities and those that are about to be brought online would be enough to meet the 50 bcm goal.

“I believe the Biden administration has the same math, as it is pretty straightforward,” he said.