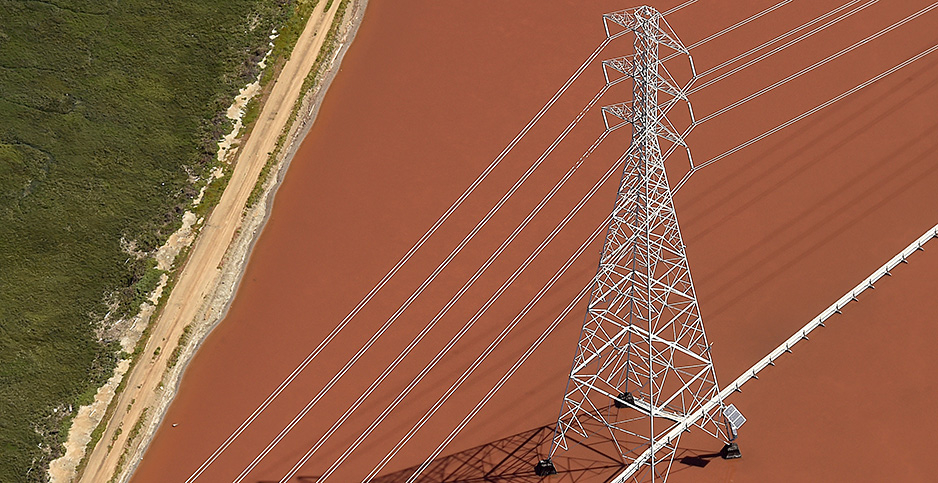 The Biden administration is exploring ways to boost development of high-voltage transmission lines to encourage renewable energy development. A power transmission line is shown crossing a marsh near Newark, Calif., in this 2016 photo. Noah Berger/Reuters/Newscom

Groups pushing for expansion of the nation’s bulk power grid to improve access to development of the lowest-cost wind and solar energy got a new ally last month — the White House.

Less than a week after being sworn in, President Biden issued sweeping climate-focused executive orders that, among other things, directed federal agencies to look at ways to accelerate clean energy and transmission deployment (Energywire, Jan. 29).

The directive signals a willingness of Biden’s Department of Energy to wade into an area that historically has been up to states: transmission siting and approval.

A mounting body of research says decarbonizing the grid and the U.S. economy requires a significant expansion of electric transmission. One of the most recent, a Princeton University study, says the country will need to expand transmission capacity 60% by 2035, and it more than triples by 2050 to support a net-zero economy (Energywire, Jan. 27).

But the vision of a vastly expanded bulk power grid faces the harsh reality that completing a single project can be a political, legal and regulatory slog that can consume a decade or longer from planning to completion.

And the prospect of DOE, and perhaps even the independent Federal Energy Regulatory Commission under Biden-appointed Chair Richard Glick, taking a greater role in the area of transmission siting threatens to put more stress on already strained federal-state relationships in the area of energy.

Alexandra Klass, a law professor at the University of Minnesota, said federal siting of interstate transmission projects would face certain challenges. But there are also efficiencies in dealing with a single regulatory authority, especially when it comes to planning interstate projects.

"Under the current system, you have those same roadblocks multiplied by the number of states that you have to go through," she said.

Still, the decision to get involved with transmission siting may come down to the political calculus.

"The question is, do the folks in charge at the Energy Department and does FERC really want to push this and risk the backlash?" Klass said. "Maybe the answer is yes."

Tony Clark, a former FERC commissioner appointed by President Obama in 2012, sees opportunities for the commission to help spur new transmission development. But he questions whether the federal government’s involvement with project siting and eminent domain will get transmission built any faster than leaving it to the states.

"We’ve been down that road before and we know how it plays out, which is a lot of litigation, probably not a lot of lines getting built and collateral damage to the relationship with states," he said.

The Biden administration could seek to accelerate transmission development through two provisions in federal law. Section 1221 of the 2005 Energy Policy Act enables federal intervention in response to transmission congestion that affects reliability.

The other, Section 1222, allows DOE’s power marketing administrations to build and operate new transmission projects within the administration’s footprint if the project meets certain criteria, including reducing congestion or meeting electricity demand.

Both provisions have been tried without success, most recently a few years ago when Obama’s DOE signed on under Section 1222 to help build the Plains and Eastern Clean Line, a $2.5 billion wind energy line from the Oklahoma Panhandle to Tennessee.

The project, which was challenged in federal court by a group of Arkansas landowners, ultimately fell apart, but not for legal reasons. In 2017, the U.S. District Court for the Eastern District of Arkansas ruled in favor of DOE against claims that the federal government overreached its statutory authority and trampled the landowners’ due process rights.

While only applicable in states where federal power marketing administrations operate, Klass said Section 1222 is a logical starting point for Biden’s DOE.

The agency could build on the work it did on the Plains and Eastern line and pursue pilot projects in the Southwest, a region characterized by wide-open spaces and significant renewable energy potential.

"In some ways there’s a better playbook for projects under 1222," she said. "You see what works, you see what doesn’t work, and maybe that’s a model for new legislation to broaden that authority."

Clark, however, said forcing transmission projects on states would be a hard sell, especially in states like his native North Dakota, where officials including Gov. Doug Burgum (R) have spoken out about the Biden administration’s decision to revoke the permit for the Keystone XL pipeline.

"If you look at the states where there’s talk about expanding transmission lines to hook up new renewables, it tends to be in a lot of those really big, geographically rectangular states, like the one that I come from and that tend to be pretty Republican," he said. "And those are also the states that have been most angry about what’s happened in pipelines here in the early days of the administration.

"Nothing happens in a vacuum, and to me it just sort of feels like a storm brewing around those issues," he said.

Clark also said pipeline opponents have, in recent years, provided a playbook for how to delay and block interstate transmission lines if the federal government gets involved.

"I really thought that when a lot of these groups went total scorched earth on pipelines, using whatever weapon they could … that they were opening Pandora’s box," he said.

Environmental advocates and landowners have banded together to battle pipeline projects. But the same interests have been divided when it comes to some major transmission projects, such as the 800-mile Grain Belt Express transmission line in the Midwest.

Groups such as the Sierra Club have pushed for the project, which would help enable development of thousands of megawatts of new wind energy.

Rural landowners in states that would be crossed by the line, including Kansas, Missouri and Illinois, have fought the project during proceedings at state utility commissions and in the courts. Opponents say the project is being pursued to generate profits for an out-of-state energy company at the expense of the rights of landowners.

In Missouri, politically powerful agriculture groups including the Missouri Farm Bureau have joined the fight and are trying to pass legislation that would kill the project.

Leslie Holloway, the group’s senior director of regulatory affairs, has already expressed concern with the Biden administration’s various executive orders. She said protecting the rights of states and property owners is core to the bureau.

"We would not want to see any erosion in states’ rights," she said.

Gunn, a former Missouri Public Service Commission chair, expects Granholm to move carefully, taking care to find common ground. "The beauty of the DOE is its power to convene, to bring everyone together," he said.

Ultimately, Granholm and the Biden administration must take into consideration all of the many factors involved, including the political consequence but also the urgency to take action on climate change.

Gunn said, "She’s going to be looking at the whole chessboard here."