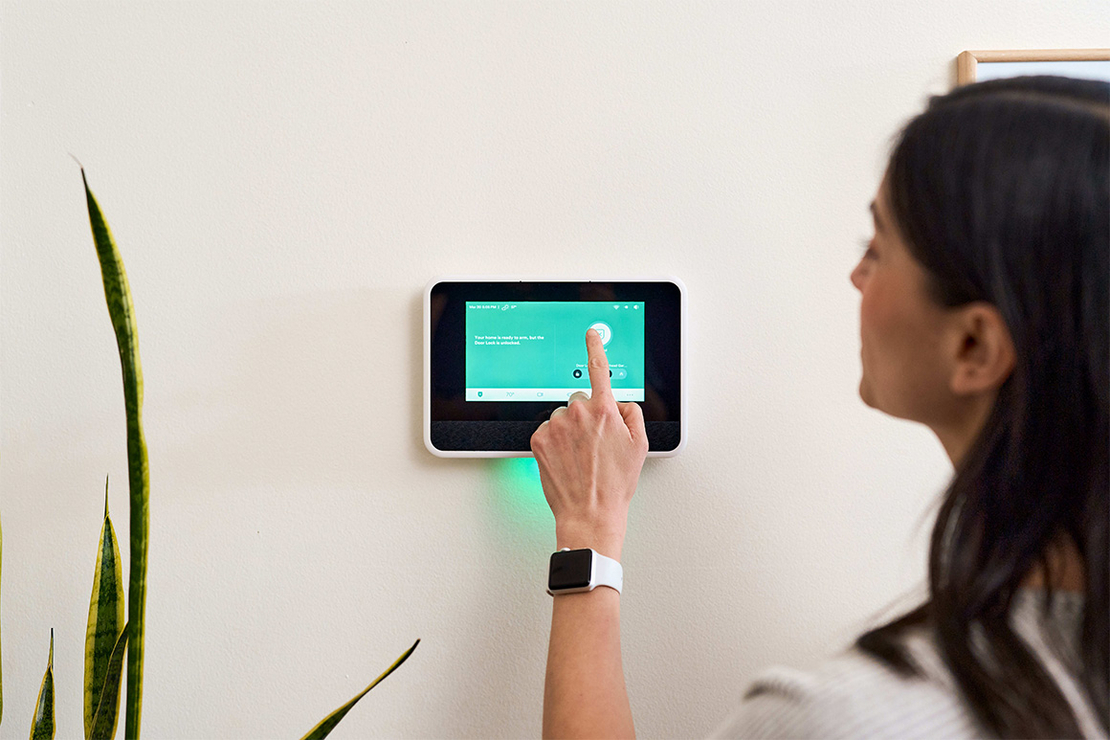 NRG Energy Inc. wants to have a bigger presence in customers’ homes, but first, the power company has some convincing to do.

Houston-based NRG announced plans in December to buy Vivint Smart Home Inc. for $2.8 billion in a deal that marks a new opportunity for the electricity sector — even though it sent NRG’s stock tumbling.

Vivint, which started as a home security technology provider, offers a range of smart-home appliances like cameras, lights, thermostats and locks. Those electronics can be controlled remotely or automatically and can be connected through a single management system.

Combining Vivint with a power producer and retailer like NRG is another major shift as the grid transitions to more renewable energy and consumers look for more control over their own energy use. Travis Miller, an energy and utilities strategist for Morningstar Research Services LLC, said that as clean energy takes up a greater share of electricity generation, “that’s not a great outcome for legacy fossil fuel power generation.”

“To adapt to this new energy landscape, it’s a natural move to focus on the customer,” Miller said. “NRG has always had a good foothold in that market; now, NRG has a first-mover advantage as the market grows.”

The company has for years sought to evolve along with the power sector, though at times investors have questioned its plans and sought to alter its focus (Energywire, Dec. 4, 2015). In 2021, NRG closed its acquisition of Direct Energy LP, the retail electricity distributor and home services company.

Mauricio Gutierrez, who became NRG’s chief executive in late 2015, said during a recent investor call that the Vivint deal was designed to “grow and deepen our relationship with customers.” Vivint’s appliances, Gutierrez added, are something that owners interact with on a daily basis.

The deal could also have significant implications for NRG’s goal to achieve net-zero carbon emissions by 2050.

Adding the Vivint platform offers NRG customers a home ecosystem in which smart controls can help with everything from energy efficiency to home solar, NRG spokesperson Laura Avant said in an email. The technology can also help flatten out peak demand, and “connected, intuitive homes can help enhance resiliency and reliability during times of grid stress,” Avant said.

“Today, the home sits at the intersection of clean energy and smart technology, and increasingly, customers want control over where their energy comes from and how and when it is consumed,” Avant said.

Rather than adding more generation to meet peak demand — as is usually the case — Sparn said smart homes could give utilities more data and insight into demand.

“There’s a big opportunity that hasn’t been tapped. There are plenty of knobs to turn on the load side,” Sparn said. “Even if you think about small tweaks on a small scale. Let’s say in the Denver metro area, even 30 percent of customers agree to some small tweaks, there can be a real impact on overall demand.”

For example, a smart thermostat connected to a utility could allow the provider to temporarily turn down air conditioning or heat during a period of high stress. A utility could instruct a smart appliance — such as a washing machine — or an electric vehicle charger to kick in at a time when demand and rates are at their lowest.

Because the smart home ecosystem is still emerging, there’s limited data on the efficiency gains they offer.

A pair of experiments run by the Oak Ridge National Laboratory studied homes connected in a microgrid and outfitted with smart appliances in Alabama in partnership with Southern Co. and its Alabama Power unit. The researchers found that energy consumption could be reduced by 44 percent and peak demand cut by 34 percent with those applications.

For NRG, the Vivint acquisition comes as the company is working to expand its battery storage offerings for customers.

Speaking to analysts and investors, Gutierrez said the pairing of home batteries — which can store solar energy generated by rooftop panels or act as backup power — with Vivint technology would “make our platform stronger and more resilient” and “unlock value within our existing network.”

Vivint also comes with a growing rooftop solar business, although the company does not handle installation or financing. NRG in 2017 abandoned its own residential solar installation business and now only offers customers in certain states connections to solar installers. Gutierrez said there were no immediate plans to resume solar installations in the wake of the Vivint deal.

NRG said the Vivint acquisition marks the first major merger of a smart-home technology provider with an electricity generator. NRG produces power and has retail customers, but it is not a traditional regulated utility. It enters many customers’ homes as a competitive electricity provider.

NRG’s electricity business operates in various areas of the country, including in Texas and parts of the Northeast.

The Vivint acquisition would make NRG a greater presence in the homes of customers and force more interactions with the company — by design.

The deal, however, was met with skepticism when it was announced last month. NRG’s stock price has dropped more than 20 percent since the day before the announcement was made. Vivint’s share price has jumped more than 30 percent over the same period.

NRG said in December that the Vivint transaction was expected to close during the first quarter of 2023.

In a report on the plan, Guggenheim Securities LLC analysts said the deal was a “surprise acceleration” of NRG’s home services plans that had been discussed for a while. That was a shift away from the status quo, and the analysts said the stock drop could represent “an investor learning curve” as the sector starts to evolve.

In a 2021 survey by the Smart Energy Consumer Collaborative, 73 percent of respondents said they trusted their electricity provider to give “the best advice on managing my energy.”

Nathan Shannon, president and CEO of the collaborative, said in an interview that the results showed utilities could use smart-home technology as a “gateway” for future engagement.

“Someone who’s looking at a smart thermostat, maybe that’s the time to talk to them about peak shaving or a time-of-use rate,” Shannon said. “The technology can work as an open door. The consumers who are looking at smart home tech are generally more engaged with energy use.”

Even when they offer energy savings, smart-home technology has traditionally been offered by tech companies such as Google LLC, Amazon.com LLC and Nest. Some of them have made inroads with electricity providers, including the energy management platform Powerley through a deal with an Ohio unit of American Electric Power Co.

And utilities themselves are now doing more to offer home appliances, especially as governments offer incentives for electrification.

Southern Co. is among the utilities that has an online store for smart-home tools and other electronics. Many power companies have offered low-cost or even free smart thermostats to customers who sign up for demand response programs that can lower energy use during periods of peak demand.

Utilities that have traditionally only interacted with customers when bills are due or when the power goes out are now seeing a bigger role for themselves.

A report from professional services company Accenture PLC based on interviews with more than 500 energy executives found that energy providers are working to craft a “story” amid the clean energy transition, with 74 percent of those interviewed saying customers prefer “new, more innovative players.”

Among the strategies Accenture explores are offering smart-home products and increasing customer-level data that can give consumers a greater hand in their own energy use.

At the same time, the overlap of home services and electricity generation can come with serious concerns.

Last summer, for example, about 22,000 Xcel Energy Inc. customers in Colorado who participated in a smart thermostat program lost control of their thermostats during a heat wave. When one of the utility’s power plants went offline, Xcel was unable to give proper notice to customers before adjusting their thermostats.

Some customers told local media that their temperatures were set in the high 70s in degrees Fahrenheit.

Tim Brennan, a professor of public policy and economics at the University of Maryland, Baltimore County, said the merging of utilities with home technology companies could come freighted with regulatory questions, even as the lines between retail electricity and generation continue to blur.

“The question becomes whether this is a competitive business or is this separable from the service of providing electricity to people’s houses,” Brennan said. “In a world where some huge amount of our electricity is coming from solar power, controlling how our cars charge or how our appliances work and how they can be varied may just be part and parcel of what it means to provide electricity.”

NREL’s Sparn, however, said there is great potential for electricity generators in gathering more customer-level data from smart-home technology and, eventually, automating and centralizing control. The tools can help utilities cut their peak demand and right-size generation capacity as they change their electricity mix, as well as boost resilience in times of stress.

She pointed to the 2021 winter storm in Texas that caused massive power outages.

“What if there had been the ability for more people to focus on what mattered, which was heating, and defer other uses?” Sparn asked. “Load control can be helpful a little bit under normal conditions, but could be really impactful under an extreme case.”

That fits with Gutierrez’s long-time goal to make customers, not megawatts, his focus, a strategy that has included shedding parts of NRG’s generation portfolio to focus on retail operations.

“Our business, instead of starting in generation and then finding an outlet for our megawatts, is going to start with the customer, and then we’re going to find what is the right supply for that customer,” Gutierrez told E&E News in 2018 (Energywire, March 27, 2018).