Can ‘Game of Thrones’ get people to talk about climate change? 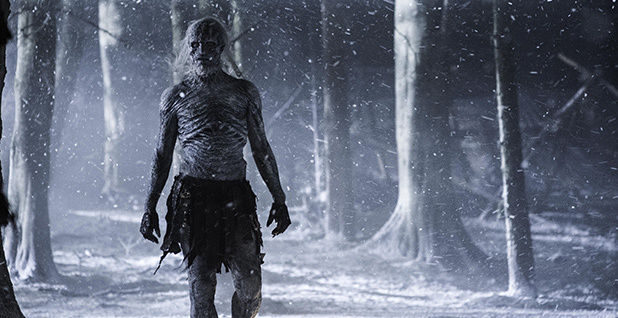 As fans of "Game of Thrones" well know, winter is coming. But they might not realize some people are using the HBO megahit’s catchphrase to spark a conversation about shifting weather patterns brought about by climate change.

For a handful of bloggers, the White Walkers — scary ice creatures that live beyond the wall guarding the fictional land of Westeros — symbolize climate change itself, while the power struggles for the "iron throne" represent the U.S. political battle between Democrats and Republicans.

Milkoreit found six blogs — both personal and on news sites — published in 2013, and eight in 2014, about half of which focus solely on climate change. More examples could arise during the program’s current fifth season, she thinks.

"The authors have an instinctive sense of the type of communication about climate change that we need, and that we don’t have, and they’re trying to use ‘Game of Thrones’ to get popular engagement with climate change, something that is really difficult to do," she said.

For those not familiar with the show, a quick primer: "Game of Thrones" is a fantasy-drama that weaves a number of parallel storylines following a host of ruling families as they struggle for power on the continent of Westeros. At the same time, north of Westeros, sinister and terrible things lie beyond a gigantic wall of ice, guarded by a group called the "Night’s Watch," whose job is to keep the bad things out.

"Storytelling is really a fundamental tool in the human toolkit of interaction," she said. "They’re using the show and the excitement it creates, the attachment you form to the characters, or emotional reactions to the show as leverage to create a reaction to climate change."

"Climate fiction," or "cli-fi" as it’s known, is similar to "sci-fi," but the science in this case is climate change-focused, and the narratives are often set in dystopian or post-apocalyptic worlds ravaged by global warming. It’s a relatively new genre of literature but has taken off in recent years (ClimateWire, May 2, 2014).

This year, six classes dedicated to the budding genre are being taught on college campuses across the United States. It’s also gone global, with classes being taught in Australia and Britain.

Howell said he’s been following the rise of cli-fi for the last year and a half through its ascent in the news. When he was asked to teach a popular fiction English class, he thought it would be the perfect opportunity to delve into climate change and science fiction.

"We had many of those moments of distress about the severity of the problem," he said. "I think now that we’re moving into the portion of the semester where we are reading fictions set in the future and dealing with climate change and political friction as a result of corruption over resources, the students are seeing people are still living their lives. It’s not that the collapse of civilization is the death of humanity."

"It strips away the feeling that it’s hard to imagine or care," he said.

Whether investment in characters surviving in a climate change-impacted world translates to direct action in someone’s life, Howell said he couldn’t say.

"I do think as a result of reading all of these books students are emerging having a much better understanding not just of the facts and science, but that the debate is not just politicians disagreeing with one another, it’s about the future of our world itself," he said.

And last year, HBO commissioned a miniseries of Margaret Atwood’s MaddAddam trilogy with director Darren Aronofsky. A release date for the series has not been announced, but the trilogy is often cited as a quintessential piece of cli-fi.

It’s a trend that doesn’t surprise Anthony Leiserowitz, director of the Yale Project on Climate Change Communication, who said the rise of cli-fi reflects the zeitgeist of our time and much deeper cultural narratives and anxieties.

Leiserowitz has been studying climate change and communication for years and says one of the largest failings of the environmental community has been how to communicate climate change to the public. Often, it’s been framed with complicated charts and numbers, which he said are great for those who rely on the analytic part of the brain, but not the way most people meaningfully engage with an issue.

"People want a good story, that’s why we flip on a series at night like ‘Game of Thrones,’" he said. "We don’t watch it to talk about climate change. … If you get some climate change perspective along the way, then that’s great."