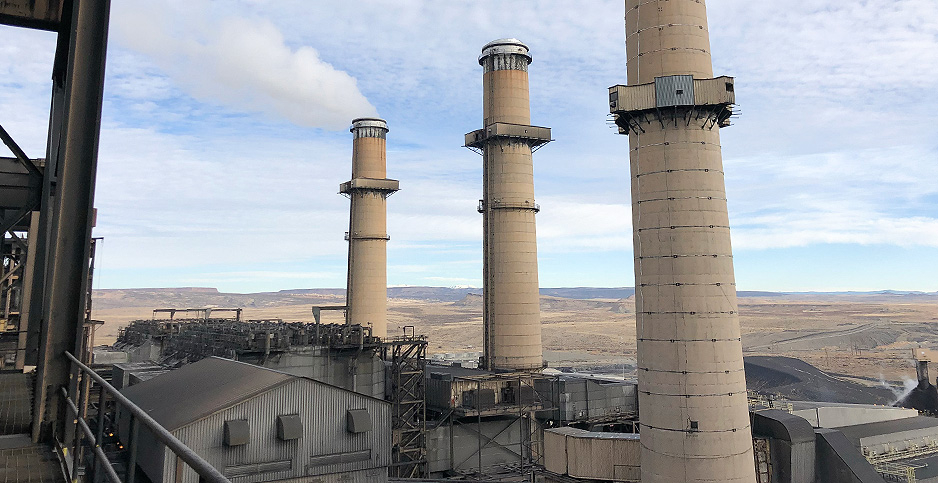 At the end of this month, the coal-fired San Juan Generating Station will produce its last electron after nearly five decades as a mainstay of power generation in New Mexico’s northwestern corner.

Or not, if you ask city officials in nearby Farmington, N.M.

The city is working with startup Enchant Energy Corp. to keep the San Juan station online by retrofitting it with what they say is groundbreaking carbon capture technology. If built, the $1.6 billion project would be one of the largest carbon capture projects worldwide and among only a handful of CCS projects in the United States in the power generation sector.

But first, Farmington and its electric utility, which own 5 percent of the plant, will have to acquire the remaining 95 percent and transfer it to Enchant. That requires all the plant’s other owners to give up their share and sign an agreement — a step that has been mired in closed-door negotiations for months.

Enchant believes it can be done, even with the scheduled Sept. 30 retirement date for the plant looming — and the rest of the plant’s owners working on a state-mandated plan to decommission it.

In an interview, Enchant CEO Cindy Crane said the commercial transfer process can continue even after the plant is closed, as units can always be brought back online.

“We believe the city is very much focused on making sure the transfer of that facility, and the rights they have to that facility, happens. And I would say that that’s really the bigger focus,” she said.

Farmington and Enchant’s plans for the San Juan plant highlight a long-standing debate about whether carbon capture should be applied to coal-fired power in the United States, particularly as the Inflation Reduction Act, now law, bolsters a key federal tax credit that incentivizes broader deployment of carbon management projects.

Enchant is partly relying on monetizing that tax credit — known as 45Q — to fund the project, according to an informational document the company sent to the Department of Energy in February. The San Juan facility is the company’s first project in what the document describes as a seven-year plan to target “six large-scale decarbonization projects,” by serving as a one-stop developer and operator.

For Farmington, the plant’s continued operation would mean the preservation of its jobs.

“The station is good for our community. It brings jobs into the community in rural northwest New Mexico,” said Hank Adair, director of the Farmington Electric Utility System (FEUS). “Frankly in rural New Mexico, it brings a large tax base. It’s one of the largest tax bases for our school system.”

The Public Service Company of New Mexico (PNM), the majority owner of the San Juan plant, originally planned to shutter the facility in June, but extended the deadline to meet summer demand.

Closing the plant is part of the company’s goal to achieve 100 percent carbon-free electricity by 2040, and is in line with New Mexico’s 2010 Energy Transition Act, which requires the state’s utilities to abandon coal-fired generating stations by Jan. 1, 2023. Other than Farmington, all the plant’s owners are signaling that closure is imminent.

But Farmington and Enchant are not sweating the deadlines, even as observers raise questions about the lack of permitting paperwork, ownership transfers or what percentage of the plant’s emissions the carbon capture equipment could actually trap.

Enchant claims it will be able to capture up to 95 percent of the carbon dioxide released from the San Juan plant. It then plans to store all 6 million metric tons each year in geologic formations in the San Juan Basin.

But that capture rate is disputed by the Institute for Energy Economics and Financial Analysis (IEEFA), which advocates for speeding up the transition to sustainable energy. In a report issued last month, the Ohio-based group called Enchant’s claims “unrealistically high.”

Factoring in the methane emissions from the coal mine that supplies the San Juan station, the IEEFA analysis said the facility’s capture rate would be “no more” than 72 percent.

“The figure is likely too high, since it assumes Enchant will be able to consistently capture 95 [percent] of CO2 generated at the plant,” the group wrote in the report.

IEEFA also ran another scenario assuming Enchant was only able to capture 65 percent of the CO2 produced by the plant. In that case, “the effective capture rate for both the mine and the plant would be 49 percent,” according to the report.

Enchant, however, has pushed back on criticisms about the viability of carbon capture technology and distanced its proposal from the Petra Nova carbon capture project in Texas, which entered mothball status in May 2020 (E&E News PM, July 28, 2020).

Before it went offline, Petra Nova was one of two carbon capture and storage facilities at power plants globally. The other CCS project — at Canada’s Boundary Dam Power Station in southeastern Saskatchewan — has been operating since late 2014.

Enchant’s Crane said the Petra Nova project went offline for multiple reasons, including that it was operated by a company that owned the generation, the carbon capture equipment and the oil field for using the CO2 for enhanced oil recovery.

But Enchant’s plans do not rely on oil recovery. Instead, the company’s “primary strategy” is to store all of the captured CO2 in geologic formations, Crane said.

“That is why geologic storage is a critical de-risker because it’s the storage piece that idled Petra Nova,” Crane said. “It was not the technology piece.”

As part of a contingency plan, Enchant also plans to build a new 21-mile pipeline to transport CO2 from the plant to the existing Cortez pipeline, which is operated by Kinder Morgan Inc. and delivers the gas into the Permian Basin for use in oil recovery. The CO2 pipeline would be developed for the “event that there is a delay” or operating issue with the infrastructure in the San Juan formations, Crane said.

Enchant has “initiated Cortez interconnection discussions with Kinder Morgan,” but hasn’t entered into a contracting process, according to company spokesperson Wally Drangmeister.

The city of Farmington and its utility, FEUS, currently draw approximately 43 megawatts of power from the station, accounting for about 20 percent of the total energy purchased (Farmington’s peak load in 2021 was 176 MW).

Adair, the FEUS director, said the city is still working on an agreement with the other owners for a successful transfer and sees the project as a “great benefit to Farmington,” a city of roughly 46,000.

Enchant and Farmington have met with regulators on required paperwork, he said, including state air quality permits for plant modifications and National Environmental Policy Act permits for the pipeline. But they have not yet obtained the permits.

So FEUS is “working all options,” Adair said, including the possibility that the plant is idled or decommissioned. FEUS submitted an integrated resource plan (IRP) to the Farmington Public Utility Commission in August that lays out eight potential generation futures. Of those, two were preferred, one assuming the San Juan plant would continue through 2037 and one assuming the 2022 retirement.

The early retirement option would require Farmington to seek a short-term power purchase agreement to meet its needs, then build 30 MW of solar by 2025. The plan projects that option would raise rates by 6 to 8 percent for that short-term period, but Adair said the increase could be as high as 10 percent given a recent rise in power prices.

No such purchase would be needed under the preferred case assuming the San Juan station continues, which would see FEUS add 90 MW of storage by 2025 and no additional solar generation.

Of those two portfolios, the early plant retirement is projected to cut CO2 emissions 53 percent by 2040, compared to 45 percent with the carbon capture project. Adair emphasized that emissions reduction was just one factor in the IRP process and that there were broader economic benefits to keeping the station open.

Under an ordinance from San Juan County, the owners must file a demolition and remediation plan within three months of the retirement. Work on that plan is ongoing, and PNM Vice President of Generation Tom Fallgren told E&E News that the company expects the demolition to begin in the second quarter of 2023.

He added that owners had studied possible other uses for the plant’s footprint — “everything from a museum to a restaurant to a storage site” — but that nothing panned out.

The state approved PNM’s plans to deploy 650 MW of solar and 300 MW of battery storage in its San Juan replacement portfolio and has inked agreements for four large-scale solar projects across the state.

However, in recent filings, PNM said that supply chain issues have delayed those installations. Two of the projects are on pace to be finished by peak demand in summer 2023, but the two others are facing further hurdles, according to Fallgren. The utility, he said, is “pursuing short-term opportunities” to meet demand in 2023, as it had to do this summer.

The plant’s other owners are not taking an active role in the Enchant project. Utah Associated Municipal Power Systems owns 4 percent of the plant and is a 50-member interlocal agency providing wholesale electricity to electric services across the West. Spokesperson LaVarr Webb said the agency is “monitoring future plans … and investigating possible involvement.”

The agency could “possibly” purchase power or participate in the Enchant project, Webb said, “but much due diligence and negotiation must be conducted.”

Arizona-based Tucson Electric Power retains a 20 percent ownership in the plant but no longer purchases power from it. Future production from the plant is not part of the utility’s IRP.

Environmental activists say they’re ready for the long-standing coal plant to make way for clean energy. Mike Eisenfeld, energy and climate program manager for the San Juan Citizens Alliance, said the carbon capture project no longer seemed “viable” and was a distraction to the real work of decommissioning that needed to be done.

Enchant, he said, appears to be “pushing this as a CO2 manufacturing facility,” generating emissions just to bury them. Instead, it is time to leave the coal plant in the past, he said.

“We should be focused on replacing San Juan with renewable resources,” Eisenfeld said. “We’re focused on making sure the owners are vigilant about replacement and cleanup, not just sticking up a fence and a guard dog.”