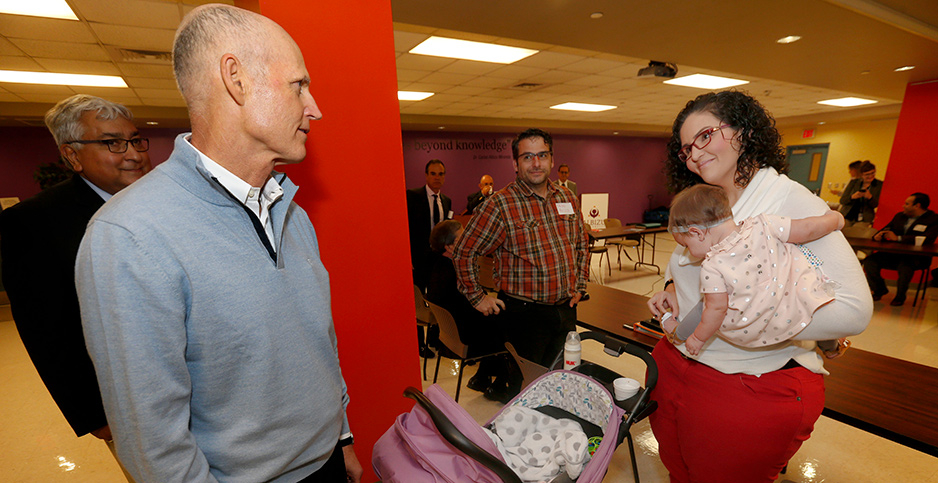 Florida Republican Gov. Rick Scott, who is running for Senate, at a January roundtable discussion on relief efforts for those affected by Hurricane Maria. Grisel Robles and her daughter Emma (right) went to South Florida from Puerto Rico three days after Maria struck. Wilfredo Lee/Associated Press

Florida’s governor, who has questioned climate change, is hoping that refugees who might be feeling its effects will help elect him to the Senate.

As Gov. Rick Scott (R) ramps up his campaign to oust Sen. Bill Nelson (D), he’s targeting Hispanic voters who include Puerto Rican victims of Hurricane Maria. Thousands of people relocated to Florida after the devastating storm last summer plunged the island into a long period without power.

Puerto Ricans tend to lean Democratic, and Nelson’s campaign is also courting them, said Carlos Vargas-Ramos, a scholar with the Center for Puerto Rican Studies.

It’s unclear how the migrants could affect the Senate race, and the number of newcomers to Florida has been disputed. According to the Center for Puerto Rican Studies, 57,500 people relocated to Florida from the U.S. territory following the storm, continuing a trend that has been occurring for a decade.

So far, only about 500 Puerto Rican migrants have actually registered to vote in Florida, according to Jennifer Duffy of The Cook Political Report, citing recent media reports.

For now, many new Florida residents are focused on finding a job and a place to live, according to experts who are watching the migration. Registering to vote might not be a top priority. Others might move to other states or return to the island. But MacManus said she believes "they could still make a difference."

Since the hurricane, there is a lot of internal mobilizing taking place within the Puerto Rican community, Vargas said. "Scott realizes Puerto Ricans are active at these moments."

‘I’m not a scientist’

The extent to which rising temperatures contributed to the storm is unclear, but scientists have said its intense rainfall and sharpened flooding from rising seas are representative of climate change impacts.

A recent poll conducted by the University of South Florida found that the environment was in the top five issues among voters for the third year in a row. Respondents in North Florida named "invasive species" as a big threat because of the impacts on fisheries. Residents in South Florida saw rising sea levels as a bigger problem.

The candidates’ opinions about climate change are wildly different. Scott, a Navy veteran and an attorney, has focused on disaster response and adaptation. Nelson, a former astronaut, has emphatically declared that higher temperatures fuel hurricanes.

Environmentalists have long criticized Scott for questioning whether people are contributing to global warming. Frank Jackalone of the Sierra Club’s Florida-based chapter said the governor "is not doing anything to prevent tropical storms from getting worse."

The Florida Conservation Voters added in a statement: "[W]hile communities throughout Florida continue to suffer from increased flooding and other effects of climate change, Scott has ignored the problem completely and failed to act on everything from clean energy to protecting our waters."

On May 12, the Miami Herald editorial board scrutinized last weekend’s Governor’s Hurricane Conference. There was no mention of climate change at the 1,200-person event, they wrote. "This is all too predictable when the governor who is the host of this 32nd Annual Governor’s Hurricane Conference is Rick Scott, famous for allegedly banning the words ‘global warming’ and ‘climate change’ from all state correspondence."

After he was elected to office, Scott grabbed headlines for allegedly instructing staff to avoid using the terms "climate change" and "global warming." He denied such direction and at the time told reporters that he had actually directed state agencies: "Instead of talking about it, let’s do something about it," according to the Union of Concerned Scientists.

Scott’s campaign said the governor invested $4 billion in Florida’s environment, adding that he is focused on "real solutions to protect our environment such as getting Florida taken off the table for offshore drilling, not political theater." As for the claim that he has avoided the term climate change, the campaign said, "[t]here is not, and has never been, a policy on this."

The meeting came days after the Trump administration announced sweeping deregulation for oil development in the Atlantic and Pacific oceans. Other coastal governors were outraged that Florida was exempted. Critics claimed that Florida received special treatment because Mar-a-Lago, President Trump’s golf resort, is located in Florida, and oil wells would obstruct ocean views.

But will it matter?

Experts aren’t sure whether the influx of voters from Puerto Rico will change the dynamics of the race, even if they do tend to see climate change as a threat.

Edwin Meléndez, the director of the Center for Puerto Rican Studies, explained that housing and jobs are the top priorities for Puerto Rican voters. Asked where climate change falls on the priority list, Meléndez could not say with certainty.

It’s also unclear how many people who fled the island after the storm are still in Florida.

"[One] thing we took away from [Hurricane] Katrina is that the move is temporary," Duffy noted. Migrants who moved within the last year are less likely to turn out to vote, Vargas added. But other indicators suggest that Puerto Ricans may stay longer: A total of 11,554 Puerto Rican students registered at Florida K-12 schools this academic year, according to the Center for Puerto Rican Studies.

Diana Umpierre, who spent her childhood in Puerto Rico and now works for the Sierra Club in southern Broward County, said some of her family members experienced the worst of the hurricane’s devastation.

She worried that Puerto Rican migrants would not know Florida’s political history. "My aunts and uncles had very little schooling," she said. "What matters to them is quality-of-life issues." It’s hard to say which way they are going to vote, she said, adding that the older population is "traditional, mostly Catholic."

After Hurricane Maria, Nelson was outspoken about human-caused climate change being the driver of more intense weather. His campaign Twitter account recently tweeted: "While Florida faces a devastating $100 billion economic hit due to climate change, Rick Scott is in denial and cut agencies that protect our environment."

Scott’s campaign responded: "Nelson also implied there was a hurricane swirling in the Gulf this week … so there’s some question about the integrity of what he espouses on social media." The campaign was referring to Nelson’s attack on Scott for traveling to Israel this week amid a developing tropical storm that appears to be petering out.

The Democratic Party in Florida "has always struggled a bit," Duffy said. She noted, though, that the Democratic Senatorial Campaign Committee is "very interested in this race."

Republicans have been aggressively, if quietly, registering people to vote, MacManus noted. In the last year, about 10,000 more Republicans registered to vote in Florida compared with the year before. Democrats are lagging, with 2,200 fewer voters on the rolls compared with a year ago, according to secretary of state records.

Last Saturday, Republican foot soldiers knocked on 20,000 doors in a registration drive, according to Taryn Fenske, the Florida communications director for the Republican National Committee. She said her team has 65 people on the ground. Fenske added that Republican campaigners have been working "day and night" in Puerto Rican communities.

After all, the trend of Puerto Rican migration is not new. In the last decade, more than 175,000 Puerto Ricans moved to Florida, and as of 2015, 1 in every 5 Latinos in Florida were Puerto Rican, according to the Center for Puerto Rican Studies.

Duffy said she believes the broader challenge for Democrats is getting out the vote for all Hispanics, not just those who moved from Puerto Rico.