Can solar save a huge coal plant? Zinke’s thinking about it 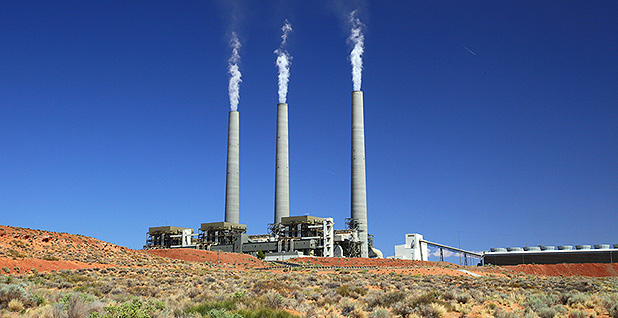 Interior Secretary Ryan Zinke met with a South African billionaire in July to discuss the possibility of using high-powered solar technology at one of America’s largest coal plants as the Trump administration searches for a way to keep the facility from closing.

The Navajo Generating Station, a 2,250-megawatt coal plant in northeast Arizona, is scheduled to retire in 2019 after four utilities with a stake in the facility voted to close it earlier this year. The Interior Department is a minority owner, and the Trump administration opposes shuttering it. As a fix, federal officials have explored regulatory rollbacks and tax credits, and attempted to help facilitate the sale of the massive facility.

But Zinke’s meeting with Dr. Patrick Soon-Shiong, a surgeon and scientist, illustrates how wide a net the administration is casting in its attempt to keep the laboring plant open.

Zinke and three top Interior officials held a rare one-hour meeting with Soon-Shiong and two members of his company, NantWorks, according to Zinke’s calendar. Also attending the July 12 meeting was David Rousseau, president of the Salt River Project, the plant’s majority owner and operator.

Further details were unclear. Harelson did not elaborate, and an Interior spokeswoman did not answer follow-up questions. NantWorks representatives also did not respond to multiple requests for comment.

Federal officials have previously studied the use of molten salt energy at NGS. It’s essentially a form of energy storage. "Concentrating solar power," or CSP, is used to heat salt into a liquid. The molten salt can then be stored until it is needed, at which time it is sent through a boiler, generating steam that’s used to turn a turbine. Coal power is generated in much the same way.

In 2012, as part of its study on the best options for NGS to comply with federal haze regulations, the Energy Department’s National Renewable Energy Laboratory did a high-level analysis of clean energy alternatives and found NGS was a good candidate for the installation of CSP technology to help augment energy production at the plant.

The authors found that the installation of molten salt energy and CSP technology could produce between 8 to 26 percent of the power produced by one of the three 750-MW coal units at the plant, depending on land availability and the plant’s usage.

"It’s been around a while, but it’s hard and expensive so you don’t do it unless you have to," said Michael Webber, deputy director of the Energy Institute at the University of Texas, Austin.

Soon-Shiong may be interested in trying. Born in Port Elizabeth, South Africa, to Chinese parents, the 65-year-old is best known for his $9 billion health care fortune. In the 1990s, he founded and sold multiple pharmaceutical companies, including Abraxis BioScience, maker of the cancer drug Abraxane. Today, he runs multiple companies, including NantWorks and NantHealth, which is focused on creating integrated health care information delivery systems. He also owns a minority stake in the Los Angeles Lakers.

But there are some signs Soon-Shiong may be interested in dabbling in the energy sector. In 2016, a California-based solar company that operates America’s first CSP facility was awarded one of the Los Angeles Business Journal‘s 2016 Patrick Soon-Shiong Innovation Awards. Soon-Shiong posed with SolarReserve CEO Kevin Smith, according to advertising photos from the event.

A SolarReserve spokeswoman said the company has come to know Soon-Shiong as a result of the award.

She would not comment on the specifics of the Interior meeting since no one from SolarReserve was in attendance but said the company believes its technology could be a good choice for the ailing coal plant.

"Not only does our storage technology solve the intermittency issues that can help states like Arizona and California increase their renewable energy supply, but our technology is U.S. developed and manufactured and creates jobs here at home in manufacturing, construction, and operations," Mary Grikas said in an emailed statement. "That could help lessen the burden from the closure of NGS."

SolarReserve operates the Crescent Dune project located near Tonopah, Nev., the first commercial application of CSP with molten salt in the U.S.

The plant, which cost $1 billion to build, consists of a circular array of 10,000 tracking mirrors that follow the sun and reflect its rays at a 640-foot-tall tower that holds the receiver. Inside the receiver, molten salt is heated to over 1,000 degrees Fahrenheit. Then, the super-hot salt is pumped into a tank, where it’s stored, and some of that heat can be siphoned off and turned into steam, which turns a turbine to make electricity (Climatewire, Sept. 26).

Zinke’s meeting with Soon-Shiong appeared to catch some of the administration’s allies off guard. The economies of the Navajo and Hopi tribes are heavily reliant on the coal industry, and tribal leaders have loudly opposed plans to close NGS. The plant is located on Navajo land while the Kayenta mine, which serves NGS, is split between the Navajo and Hopi reservations.

Mihio Manus, a Navajo spokesman, reiterated that point, saying "molten salt is not on our radar." He praised the Trump administration’s efforts to keep the plant open.

Peabody Energy Corp., the operator of the Kayenta mine, has led the lobbying charge to keep the plant operating as a coal-fired generating station. In an email, the company did not respond to questions about Soon-Shiong’s meeting with Zinke, saying instead it was pleased with how efforts to find a new owner are progressing. The company said earlier this month that a consultant had identified a list of potential buyers but did not disclose their identity (Climatewire, Oct. 2).

Heather Swift, an Interior spokeswoman, did not respond to questions about the alternatives currently being considered for the plant.

Instead, she wrote that Interior is interested "in an economic pathway where NGS operates post-2019," saying it is hoping to stave off the loss of thousands of jobs associated with the plant.

The department, nonetheless, "maintains an arms-length distance allowing negotiations to proceed among the appropriate parties, and any potential new owners," Swift wrote in an email. "Interior is not involved in reviewing nor is aware of the parties which have expressed interest in a post-2019 future for NGS."

Molten salt is not the only alternative being floated for NGS. Navajo officials briefly raised the idea of pursuing coal gasification, but Manus backed away from that idea yesterday, saying the tribe has studied the idea for 40 years and deemed gasification "uneconomic."

As natural gas prices have eroded NGS’s profitability, federal officials have kept an eye out for ways to reduce the coal plant’s costs.

Interior officials asked Peabody representatives if the company qualified for the Indian coal production tax credit, according to a Feb. 24 email exchanged obtained by E&E News in a Freedom of Information Act request. Peabody would qualify, but the credits first need to be extended by Congress, a company official responded. A bill proposed by Montana Sens. Steve Daines (R) and Jon Tester (D) to extend the credits is now before the Senate.