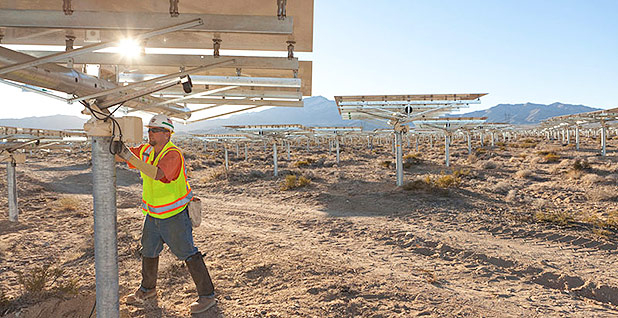 A construction worker installs a heliostat at the Ivanpah Solar Electric Generating System in California. Photo courtesy of the state of California.

California’s Senate leader wants the Golden State to shift to 100 percent renewable electricity by 2045, pushing it to lead the country in grabbing that green power goal.

Environmentalists are cheering California Senate President Pro Tempore Kevin de León’s (D) plan to double, and accelerate, the state’s current renewables mandate of 50 percent by 2050. Oscar-winning actor Leonardo DiCaprio even tweeted his thanks to de León among his 17 million followers.

The nation’s most populous state switching to fully renewable electricity sounds idealistic. But several experts said it can be done — with a lot depending on definitions, technological advancements and acceptable price tags.

"2045 is a long way away," said Severin Borenstein, economics professor at the University of California, Berkeley’s Haas School of Business. "A lot could happen between now and 2045."

"You would need to build new transmission lines to support the incoming [renewable] power," Birenbaum said. "Old power lines might not be able to support it."

Utility substations also likely would need upgrades, he said, adding, "You’re talking about many billions of dollars that have to be invested in that new renewable energy future. It’s the ratepayer who will have to pay for that."

Borenstein said that calculating how much it will cost nearly 30 years from now is "nearly impossible to answer. … Imagine going back 30 years," when the internet-connected cellphones used now didn’t exist.

De León’s S.B. 584 comes as California leaders vow to aggressively push ahead on climate change policies and defy any attempt by the Trump administration to roll back climate and clean energy measures.

The demand footprint of big utilities is shrinking as several cities have opted for community choice aggregation (CCA), forming groups that contract to buy power. Meanwhile, more people put solar power on their rooftops, and there’s a state-ordered push for more energy storage.

Utilities, regulators, environmental groups and others, meanwhile, are dealing with the implications of a de León bill passed last year. S.B. 350 increased the renewables mandate to 50 percent by 2050 and ordered a doubling in the energy efficiency of buildings. It also ordered all utilities, including municipal ones and CCAs, to show they’re making progress toward reducing greenhouse gas emissions.

The new bill in addition to the 100 percent mandate would speed up the 50 percent deadline to 2025.

The measure is intended as a draft to get people talking, see how much support exists and figure out what would be needed politically to get lawmakers and interested parties on board, said people familiar with the process. Competitive juices are flowing as Hawaii and Massachusetts look into 100 percent renewable power.

California’s largest investor-owned utilities mostly declined to comment on the proposal. In conversations with legislative officials in Sacramento, they’ve indicated the 2045 goal is far enough out that they aren’t panicked. But they wanted to discuss what flexibility would exist to reach the proposed mandate, said those aware of the talks.

Pedro Pizarro, CEO of Edison International, said he thinks it’s technically possible for California to go to 100 percent renewable power, as resources could be paired with batteries. But he said questions remain around economic feasibility, reliability and timing.

California alone can’t solve climate change, he said, but "I do think the long-term trend, certainly in California and probably more broadly, is going to be towards more and more renewables."

"Eventually there will be 100 percent," he added.

The proposed goal of speeding up the deadline on the 50 percent renewables to 2025 is likely to have utilities more concerned, Smutny-Jones said.

They’d likely argue against buying more renewable power "because they don’t know who their customers are," as the growth in CCAs and in rooftop solar shrinks their demand base, he said.

How to calculate costs

The largest utilities in California said they are on the path toward meeting the existing 50 percent by 2050 mandate. That edict requires them to use wind, geothermal, biomass, small-scale hydropower and utility-scale solar. They cannot count household rooftop solar, large hydropower or nuclear.

Statewide, renewable generation was 24.5 percent in 2015, the most recent year available. With solar alone and including panels on rooftops, California has an abundance of renewable power to meet daytime needs, experts said. On some days, there’s too much solar energy, forcing the grid manager to ask generators to back down their production.

California also imports electricity. Last year that constituted about a quarter of the California grid’s average daily demand, according to the U.S. Energy Information Administration.

Imports as a portion of overall generation have steadily increased in recent years, said Cara Marcy, renewable electricity analyst with EIA. In-state generation has been trending down since 2007. That has happened because of the 2008 recession, and then as the economy recovered, people bought more efficient appliances, electronics and lighting, Smutny-Jones said.

"It’s mostly a question of willpower," he said, adding that "from a technological, economic point of view it’s possible to do it." The main obstacle, he said, is that there are people with a financial interest in stopping it from happening.

There are all kinds of energy storage options beyond batteries, he said. Stanford at night freezes ice in rooftop tubing, with the melted cold water from it used for air conditioning during the day. A pilot system in Okotoks, Alberta, uses solar plus heated rocks underground for winter heating.

Jacobson rejected the idea of consumers having to pick up the costs if natural-gas-fired plants in California were put out of service early. If you factor in health costs connected to air pollutants, he said, the plants "cost more to stay open."

Jacobson added that while aiming for 100 percent electricity is "a good start, we have to go a lot further than that." The emissions for electricity constitute about one-fifth of total greenhouse gas pollution, he said. The country needs to deal with emissions from aircraft and ships and electrify all transportation, he said.

The challenge in seeking 100 percent renewables is how to address peaks in demand that are well above the system average, said Arne Olson, partner at Energy and Environmental Economics, an energy consulting firm.

On the grid managed by the California Independent System Operator, the average electricity demand ranges between 20,000 and 35,000 megawatts. But there have been peaks of more than 50,000 MW. Those spikes have driven infrastructure planning for decades, he said.

"Every electric system in the developed world is built around the expected peak demands that might be placed on," Olson said, from the size of the transmission system to the size of distribution wires. "Every piece of infrastructure is designed around the highest peak it might see in 10 years."

It’s "a matter of how much expense are we willing to bear to make sure that we’ve kept that level of reliability that we’re accustomed to," Olson said.

It gets increasingly expensive to provide power as the renewables share of electricity gets closer to 100 percent, he said. It’s similar to natural gas "peaker" plants that sit idle for most of the year and run only when needed. "This has been the way that we’ve done it for years," he said.

Birenbaum with Chai Energy noted that utilities in recent years have put about $100 billion into infrastructure and now are looking at more investments in battery storage. Anything additional utilities had to spend for an upgrade to meet the state’s proposed 100 percent goal is "going to cost the customer more money," Birenbaum said.

"Everyone wants to push it farther and farther," he said. "All of a sudden the lights go out, like in Germany." In that country there were some blackouts in 2012 that some blamed on adding more renewable power than the grid could handle, without enough base load to support it.

"That’s a very dangerous game that we’re playing here in California," Birenbaum added. "We always try to put burden on utilities or think technology is going to solve it."

Birenbaum argued that the state needs to take steps to shrink electricity consumption and improve energy efficiency. About 30 percent of electricity use comes from waste, such as leaving lights on, he said.

Lawmakers would have to decide if they are sticking with the current rules on what is renewable.

The state does not allow utilities to count large hydropower as part of their renewable electricity makeup. The intent of that was to prevent creating a reason to build more large dams, said a person familiar with the original renewable portfolio standard legislation. That’s one aspect that might need another look if the state considers going to a 100 percent green power mandate, he said.

Large hydropower in recent years has generated 6 to 12 percent of the state’s electricity, depending on precipitation and other water needs.

Smutny-Jones said his group would oppose allowing large hydro, because excluding it as a renewable has been state policy for decades.

The trade group also would oppose allowing rooftop solar to count. Panels on roofs already lower the amount utilities have to generate to meet their renewables mandate, he said. That’s because the RPS requirement is based on a percent of retail sales. A consumer with rooftop photovoltaics is buying less electricity. So including household PV toward the 100 percent renewables would be "double-counting," he said.

California needs to look at how it will define 100 percent renewable electricity, Berkeley’s Borenstein said. Does the state only want clean power within its borders on an every-second basis, he asked, or does it want at the end of a year to say it consumed all clean power?

If the latter, the state could calculate how much power it consumes, then buy from outside the state what it couldn’t make in California. It would sign agreements for renewable power amounts to match what’s needed, Smutny-Jones said.

"It really comes down to more of a system of accounting," he said.

If California wanted to ensure 100 percent all the time, it probably couldn’t expand its grid to take power from other Western and Midwest states. California might aspire to get wind power from Iowa overnight, Borenstein explained, but there wouldn’t be any guarantees that the Golden State wouldn’t take in fossil-fuel-generated electricity.

"Electricity is electricity," Borenstein said. "You can’t identify the electrons coming in, where they came from."