Can the grid’s wildfire defense stay ahead of extreme weather? 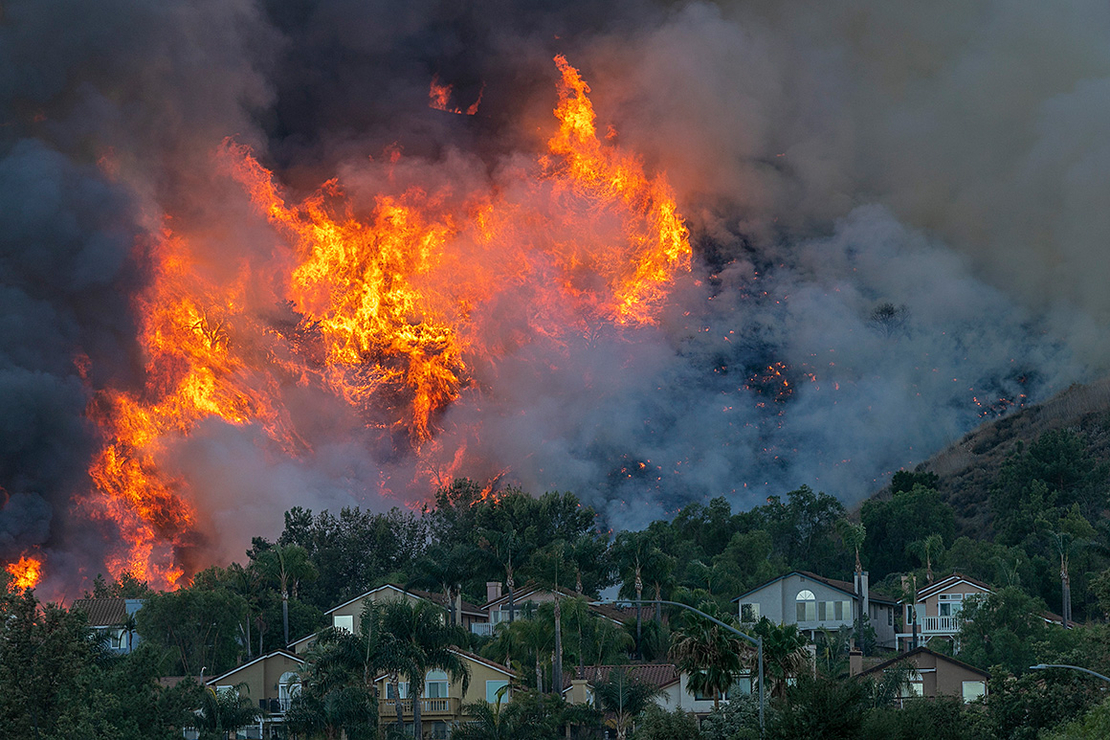 Flames are seen rising near homes during the Blue Ridge Fire in October 2020 in Chino Hills, Calif. David McNew/Getty Images

One afternoon last August, a high-definition camera on a Pacific Gas and Electric Co. tower spotted the first smoke plumes of a new California wildfire north of Sacramento, ahead of trained volunteer fire watchers.

In the desperate battle against Western wildfires, when minutes matter, the “find” by the camera and its artificial intelligence analytics was a victory for new technologies intended to counter the expanding threats of extreme weather. Fast detection and response helped limit the fire — which investigators pinned on campers — to 2,616 acres.

But can technology arrive fast enough to stay ahead of the spreading dangers to energy infrastructure that climate change is creating?

It’s a question that resurfaced recently when a California state agency renewed PG&E’s safety certification, despite opposition from fire victims and others (Energywire, Feb. 2).

Emerging options include sharpening extreme weather forecasts, detecting dying trees and cutting off electricity to broken lines before they start a blaze, according to Mark McGranaghan, vice president of technology innovation at the Electric Power Research Institute.

Climate models running on supercomputers at sites like Argonne National Laboratory and the National Center for Atmospheric Research in Boulder, Colo., if downscaled to particular geographic locations, can give grid planners and utility defenders a well-informed preview of what’s coming at them in the coming years with time to prepare, said Andrew Bochman, senior grid strategist at Idaho National Laboratory.

The jury is out on technology investments at PG&E, forced into a bankruptcy reorganization in 2019 after wildfires blamed on its equipment left it facing an estimated $25 billion in claims, and responsibility for 85 deaths in the catastrophic Camp Fire around Paradise, Calif.

The utility emerged from bankruptcy in 2020, but not from the fire threat that has other U.S. power companies watching closely.

“The biggest lesson from California is to get ahead of the problem and don’t wait for it to catch up with you,” said Michael Wara, director of the Climate and Energy Policy Program at Stanford University and a former member of Democratic Gov. Gavin Newsom’s Commission on Catastrophic Wildfire Cost and Recovery.

“It’s so much harder to balance investment in the clean energy transition, with paying for the cost of climate adaption when you’ve already generated a lot of losses because you didn’t prepare,” Wara said. “It’s easy to lose your social license to operate, and hard to get it back.”

PG&E remains in an uphill struggle to gain a measure of public trust in its wildfire defense investments.

California’s Office of Energy Infrastructure Safety, which oversees PG&E’s current thousand-page Wildfire Mitigation Plan, credited the utility with having the industry’s largest deployment of high-definition fire detection cameras. It deployed 216 of the cameras in 2020 and was on pace to reach its goal of 600 cameras installed this year, covering 90 percent of its high fire threat territory, the energy safety agency reported.

This winter, officials also pinned the cause of last year’s massive Dixie Fire on a tree that fell into a PG&E power line, triggering sparks that ignited ground cover. The fire eventually scorched 1 million acres, roughly the size of Rhode Island. The finding opens up PG&E to potential criminal or civil penalties (Energywire, Jan. 5).

Although camera systems didn’t help early detection of the Dixie Fire, the technology is one of the most promising to come from research labs and vendors, McGranaghan said. Artificial intelligence software will tighten identification of fires by filtering out false positives, like a column of dust kicked up by a truck on a mountain road, and combine images from multiple cameras to pinpoint fire locations.

In another high-profile use, San Diego Gas & Electric (SDG&E) has successfully tested sensors with communications links that can determine when a power line has been cut and can shut off current to the line in less than a second, before a severed end hits the ground and begins sparking, McGranaghan said. “They’ve proved that could be done,” he added.

Ryan Bradetich, SEL’s senior vice president of research and development, said in an interview that its off-the-shelf phasor measurement units can provide real-time monitoring of power line breaks. “The technology we’re using [in the test] is very commonly available,” he said.

“The missing element was the communications platform,” said Ryan Gerbrandt, chief operating officer of Anterix, which is promoting the use of the broadband communications spectrum it holds to utilities to manage their smart grid and security operations.

The tests verify that the system can detect the downed-line signal and transmit it to a substation to activate the command to shut off power on the line — in less than a second, he said.

SDG&E has approximately 180 circuit miles covered by falling line protection devices in test operations and plans to expand the technology in wildfire areas of its system, the company says.

SDG&E CEO Caroline Winn told state authorities in September “this program is ready to move beyond the pilot phase due to the successful lab and field tests which have been completed thus far.”

Public Service was still in the midst of its program when fire broke out in its service territory in Boulder County on Dec. 30.
While firefighters were still searching for the ignition point, the inferno leaped past them, eventually incinerating more than 1,000 homes and buildings in the towns of Louisville and Superior. Persistent drought had turned grass and underbrush into tinder, and hurricane-strength winds rendered firefighting helpless.

“Currently, many utilities are only beginning to respond to these vulnerabilities,” the ICF report concluded.

California’s utilities are fighting the continuing damage to trees and ground cover from worsening drought and heat.

Patricia Poppe, PG&E’s CEO, said in September that the company was removing 300,000 trees in 2021, and trimming 1 million more. But there were still over 8 million dead or diseased trees “within striking distance” of its lines, she said. In its report, PG&E acknowledged failures in concentrating efforts on highest fire risk priority areas.

The state’s three largest utilities — PG&E, SDG&E and Southern California Edison — told state regulator their budgets for wildfire defense in 2021-22 would total $15 billion, two-thirds of that by PG&E.

Last July, PG&E said it can only rely so much on fire defense technologies. It asked state utility commissioners to approve burying up to 10,000 miles of aboveground distribution lines in high wildfire risk areas. Estimates of the cost range from $20 billion to $40 billion.

“There is an emerging consensus in California that what’s going on is not sustainable. It’s too expensive,” Stanford’s Wara said.

Wildfire defense will require not just dead trees and new technology, but building code and zoning changes, part of a much wider agenda, he said.

“It actually makes sense to do things that seemed inconceivable, because it will get us out of the trap we’re stuck in,” Wara said.