Can the U.S. impose a border tax without pricing carbon? 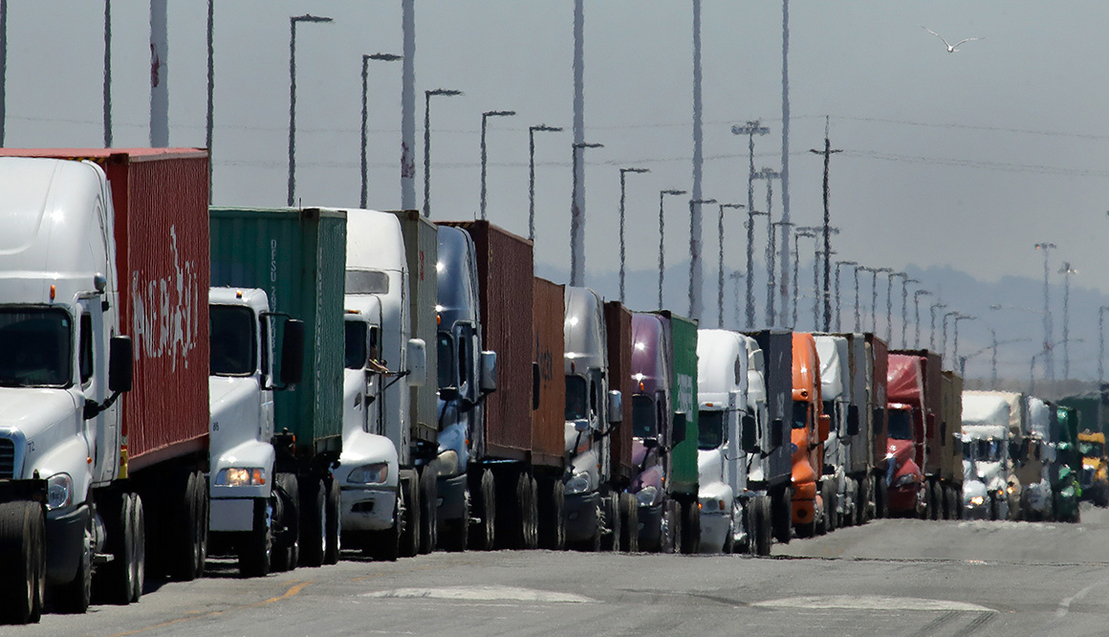 Trucks with shipping containers line up at the Port of Oakland. The U.S. is considering whether to enact a border fee on carbon-intensive imports. AP Photo/Ben Margot, File

Europe made waves last week when its leaders released a blueprint for the world’s first border tax on carbon emissions. But experts say the United States would have a tough time following in Europe’s wake — despite Democratic plans to do just that.

The main reason? Unlike Europe, the United States does not have a broad system for trading carbon emissions. That would make it exceedingly difficult for American policymakers to figure out how to tax carbon-intensive products that cross the U.S. border, experts said.

It’s not just an academic problem, either.

If Europe succeeds in implementing its border tax, it will fundamentally change how the world’s economy operates. Companies from countries with weaker climate laws — including the United States — would have to pay more to export their goods to Europe.

The goal is protection. European leaders want to enact strict climate laws, but they also don’t want their homegrown industries to lose out to overseas competitors that can produce cheaper goods with a bigger carbon footprint.

All of this puts the United States in a bind.

Congressional Democrats have tried to fill in the gap.

Under a bill released yesterday by Sen. Chris Coons (D-Del.) and Rep. Scott Peters (D-Calif.), the United States would impose a fee on carbon-intensive products at the border.

But the tax only would apply to a few select products. And the price would not be based on a system for trading carbon emissions.

“The import fee will be based on the domestic environmental cost incurred and will initially cover goods that are both carbon-intensive and exposed to trade competition, including aluminum, cement, iron, steel, natural gas, petroleum, and coal,” according to a summary of the bill.

That could prove problematic, said Alex Flint, executive director of the Alliance for Market Solutions, a conservative group that supports carbon pricing.

“The ideal policy approach is for the U.S. first to impose a domestic cost for carbon and then to have a corresponding carbon border adjustment,” he said.

One advantage is simplicity.

Other experts said that trying to pass a border tax without a carbon price ultimately becomes an exercise in trying to figure out an alternate way to impose a carbon price.

In the absence of a carbon price, the bill calls on the Treasury Department — in coordination with other U.S. agencies, including the Office of Management and Budget and the U.S. trade representative — to determine annually what carbon costs producers face under current climate-relevant regulations.

That could take into account costs borne under the Clean Air Act and state rules such as the Regional Greenhouse Gas Initiative, which sets a price and cap on CO2 emissions from power plants. It also could include indirect costs from a clean energy standard if it comes to fruition since there is a pass-through for electricity costs that would add to producers’ burden.

Determining those abatement costs would allow for the calculation of an implicit carbon price that then could be imposed on imports. Effectively, it’s an elaborate workaround to establish a price on carbon.

“Theoretically it’s quite intriguing because it goes to the core of the issue: You implement policies — whether it’s a tax or a performance standard or a technology mandate — they impose costs,” said Michael Mehling, a climate policy expert at the Massachusetts Institute of Technology.

It also gets at a key justification for a border adjustment: to level the playing field and protect against carbon leakage.

Put more simply: “You try to identify the costs and then you adjust for it,” Mehling said.

He called the approach “policy agnostic” because any policy then could be translated into an environmental cost.

The problem is that a price would be tricky to calculate in the absence of a carbon market and likely would be subject to arguments that favor one calculation over another, he added.

An additional challenge would be how to fairly credit foreign producers for their own costs from similar policies, said Christopher Kardish, an adviser on carbon markets at Berlin-based think tank Adelphi. Even determining which policies count would be challenging.

Plus, it would be harder to defend those calculations against foreign competitors, and they would be vulnerable to challenges before the World Trade Organization for being arbitrary and protectionist.

The notion of such a challenge intrigued Flint from the Alliance for Market Solutions.

“It would create uncertainty and might change the political dynamics about a domestic price on carbon,” he said.

That’s where details will matter.

“Particularly if tariffs can be designed to avoid dumping high-carbon-content goods in the United States, they could gain some amount of Republican support,” said Flint, who has spoken at length with Republicans about carbon taxes.

What’s clear from the E.U. proposal, he said, is that the E.U. is committed to pricing carbon and to imposing a border adjustment to protect its climate ambition and domestic manufacturing.

“If the United States fails to implement a carbon price, it will be increasingly out of step with its major trading partners,” Flint added.

Plenty of questions remain, including whether the E.U. will agree to alternatives to fees from countries that have stringent carbon-cutting policies and are proving effective at decarbonizing certain sectors.

The bill put forward yesterday by Coons and Peters includes exemptions for the least developed countries, those with equally ambitious emissions-cutting regulations and any country that “does not impose a border carbon adjustment on products produced or manufactured in the United States,” it states.

That could mean the United States may seek to use levers at its disposal to encourage the E.U. to find a way forward on the question of carbon pricing, said Trevor Sutton, a senior fellow for national security and international policy at the Center for American Progress.

What it means for trans-Atlantic relations and relations with China are other important questions going forward. The United States and the E.U. need to get on the same page for this effort to have a global impact, Sutton said.

For their part, Coons and Peters seem to recognize the bind.

Both have led efforts to put a price on carbon. And they believe it’s the best way to reduce emissions and implement a border carbon tax, said a spokesperson for Coons.