Can trading save the Amazon? 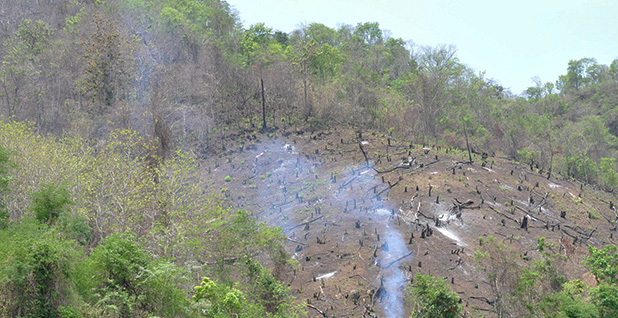 Illegal logging, slash-and-burn forest clearing of the type seen above and the expansion of agricultural land are among the leading causes of deforestation in Brazil and throughout the tropics. Whether carbon trading can save the forests remains an open question. Photo by Shankar S., courtesy of Flickr.

One morning two days before Christmas in 1988, Chico Mendes, the leader of a group of rubber tree tappers, walked into his backyard to take a shower. That was his routine. Two gunmen were waiting for him there, and when he appeared, they stitched his tall body with bullets. That was their routine.

Assassinations were common then in Acre, an almost lawless state in Brazil’s western Amazon. Think of it as a New York-sized state where 87 percent of the land is tropical forests. Environmental groups talk about the Amazon’s vast jungle as being highly valuable. They describe it as the "lungs of the planet" because its trees ingest much CO2 from the atmosphere and store it.

Cutting these jungles down or degrading them so they’re more vulnerable to forest fires and other types of destruction are matters that increase the world’s greenhouse gas emissions by as much as 20 percent a year. That is more than the world’s transportation sector generates.

In theory, then, Acre’s jungle was valuable, and protecting it could be of value to the world and serve as one basis for modern emissions trading. But the facts of economic life in Acre were not always based on altruism. In 1988, the value of keeping the jungles was hidden to most people, and Mendes’ corpse was one way to keep it that way. Much of the state’s private business was related to illegal logging. The people who ran the business also controlled the state’s government.

Thousands of people who lived in the forests and gathered Brazil nuts or, like Mendes, tapped the milky latex from its wild stands of rubber trees were desperately poor, and the state discouraged them from seeking legal title to the land where they had lived for generations.

People like Mendes were drawn to Acre by a boom in the demand for natural rubber that surged in the 1880s and later ebbed. The men who gunned him down were hired by farmers and ranchers who made money by clear cutting portions of the jungle and chasing rubber tappers and their families who lived their away from their homes. That was in the 1960s, when Brazil’s government subsidized efforts to clear jungle land for raising cattle.

Hundreds of rubber tappers and their families fled from their homes, some of them crossing the border to seek safety in Bolivia. Those who remained and organized protests, as Mendes did, were sometimes beaten or shot.

Out of the ashes, a new industry grows

Much of South America’s Amazon was like that then, and parts of it — where illegal logging and gold mining thrive — still remain outside the law today. The value of other resources was dictated by men with guns. Acre’s government felt that even mapping lands where indigenous people lived was bad for business.

Until Mendes came up with a proposal for creating "extractive reserves" that protected forest products and gave them value, much of Acre’s real economy and the costs related to running it — such as killing him — remained a black hole.

But this killing created a martyr. Mendes’ friends, union leaders and Catholic Church officials allied with environmental groups to outvote the oligarchy that ran Acre in 1998. A year later, the new government passed the "Chico Mendes Law" that incentivized land ownership and forest protection.

Logging became legal and regulated in Acre. The government eventually established 67 "extractive reserves" where forests were protected. As the new rules emerged, so did industries including cabinet work, furniture making, a flooring factory and a housing industry. Primitive versions of these businesses were previously invisible to tax collectors because they fed off illegal logging.

Roads were paved. Brazil nut cooperatives sprang up along with a factory that produced latex rubber for contraceptives. The state’s tax base grew to the point where the state could invest in the ultimate way to police the degradation of their forests: modern satellite systems that can see illegal logging and land clearing underway on plots as small as 4 square meters.

Trading has tempted some nations to try to get rich while fighting climate change.

Around 2008, China created a system based on manufacturing and then destroying a powerful greenhouse gas, an effort that was too ambitious and eventually collapsed. Brazil, led by Acre’s example, began to focus on a slower, more sustainable road to prosperity by creating a transparent economy that attempts to measure, expand and then protect the real value of the Amazon’s forests.

One of Acre’s mentors in how to do this has been Stephan Schwartzman, an anthropologist who met Mendes in 1985. He came to discover in 2000 that the efforts of the new government Mendes inspired in Acre were getting little attention from Brazil’s national government.

"Not even the environment ministry, let alone the [nongovernmental organization’s environmental groups] in the Amazon had any idea what was going on," he said. There was a big debate raging among international climate talks on ways to use the part of the Kyoto Protocol that China was trying to exploit, called the Clean Development Mechanism, to protect forests.

"So I kind of pointed out that there was this big dogfight going on in international climate negotiations and they [Brazil] had a stake in the outcome, but their dog was getting slaughtered."

Schwartzman, currently director of tropical forest policy for the Environmental Defense Fund in Washington, D.C., took a delegation from Brazil to U.N. climate talks in Europe to make the case.

"When you look at what a state and the other states of the Amazon and the federal government there have done over the last decade, it’s a lot more like what California is doing or what Europe is doing.

"They’re setting a target and reducing emissions across this pretty substantial geography," he explained, referring to Brazil’s satellite-tracked forest protections, which have reduced deforestation in the Amazon by 80 percent since 2004.

So far, though, the issues involved in setting up a functioning international emissions trading system for protecting forests remain a work in progress, although they have been debated in international climate talks since 2005. While the conceptual problems have been resolved, the lingering issue is getting a real market started.

According to Frances Seymour, who has been watching the efforts to create one, the first wave of enthusiasm began around 2007, when the example of Acre’s revolution had begun to sink in.

Other states wanted to implement a market-based international trading system, a concept that became known by its opaque acronym — REDD+, or Reducing Emissions From Deforestation and Forest Degradation, plus enhancing forest regrowth.

REDD+ was near the top of the agenda in climate talks in Bali, Indonesia, in 2007, and three years later in the runup to Copenhagen, Denmark’s parley.

"People were throwing around numbers in the order of $20 billion a year," explained Seymour, a senior fellow at the D.C.-based policy research group the Center for Global Development.

She recalls economists estimating that credits for protecting forests would be cost-competitive compared with other emission reduction options and that much money might flow from industrial nations to forest-rich countries under a global cap-and-trade system, which seemed imminent at the time. But when the Copenhagen talks fizzled, REDD+ appeared to be headed toward oblivion with them.

But then a number of rich nations stepped in, pledging almost $9 billion in public funds between 2006 and 2014 to support nations that were trying to stop the accelerating loss of their forests. Politically, according to Seymour, it helped. "They were trying to keep the dream alive. Their view was to get some agreements going and develop proof of concept."

Among the would-be rescuers were Norway, Great Britain and Germany, which called its effort the "REDD Early Movers Programme." It has already made payments to Acre to support its forest protection efforts. Technically, that’s because the key to REDD+ is to get results-based payment for the values that forests provide to the planet, beginning with massive carbon storage.

But the endgame, according to Seymour, is to enable companies, such as California’s utilities, that may want to buy offsets from forest-rich places like Acre to find them in markets such as California’s cap-and-trade system. California is creating more demand for them by gradually lowering or capping the allowances it issues to utilities and other private sources of fossil fuel emissions.

At some point, international sellers of offsets may be competitive. As long as they can meet verification standards for forest protection and other safeguards set by California’s Air Resources Board (CARB), they can influence the state’s market-based price for offsets.

Sean Donovan, a CARB official who oversees the discussions with Acre, says California allows trades in forestry-related offsets from three Indian tribes in the United States, adding at a recent hearing that an offset deal with Acre could be the first international venture. "We’ve focused on Acre because we think it’s closest to the U.S. program," he explained.

Whether the current turmoil in Brazil’s national government in the wake of President Dilma Rousseff’s impeachment will affect an eventual deal remains unclear.

But if the two states agree, the deal could lure California companies into the market as buyers. According to Seymour, "If California demonstrates that this can be done in a way that is technically feasible, it will show that some of the risks that people have put forward can be managed properly."

The spirit of Chico Mendes has already achieved a following far beyond the borders of the jungle. For example, there are a number of companies, led by the British and Dutch giant Unilever, that are pushing their suppliers to use only wood, palm oil and other commodities that can cause deforestation that have been grown sustainably. "We’re not ready to say farewell to our forests," said a recent press release from Unilever.

So far, 64 nations have joined a partnership to implement REDD+, and two years ago, in August 2014, the governors of 22 states and provinces that contain a third of the world’s tropical forests trekked to Rio Branco, the capital of Acre, to call for more international support for REDD+.

California’s market-based trading system, explains Seymour of the Center for Global Development, "throws a kind of lifeline to all those political leaders" who know how difficult it can be to change the status quo and to local communities who have borne the dangers and seen the destruction of illegal logging. "Now is a really good time to give a signal that this [reform] is possible."