Can Trump bring order to chaos? 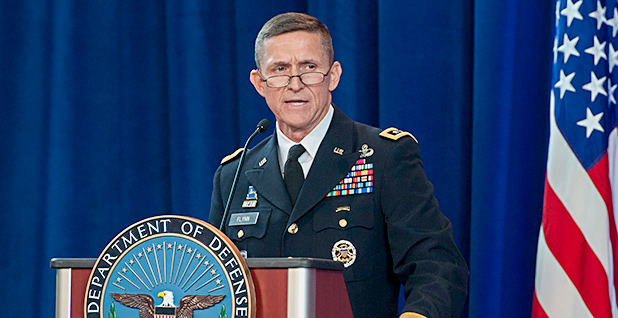 The chaotic opening chapter of the Trump presidency is raising questions about whether the proud builder can assemble a team of White House policy architects and deliver a platform.

Trump’s headline promises in the energy, infrastructure and security realm require constructing consensus among conflicting agency agendas, leaders in Congress and outside political demands. Can a president who pledged to "drain the swamp" build something in its place?

It’s too soon to draw conclusions, said Michael Greenberger, director of the University of Maryland Center for Health and Homeland Security. "On the other hand," he said, "there are lots of pieces of evidence that are very worrisome."

The jarring resignation of former national security adviser Michael Flynn this week, less than a month into the new administration, has brought Trump back to the firing line in his war with the news media. "He’s been treated very, very unfairly by the media — as I call it, the ‘fake media,’ in many cases — and I think it’s really a sad thing that he was treated so badly," Trump said at a press conference yesterday.

Trump’s choice of Flynn, however, pointed to a different issue bearing on the ability of the Trump White House to lead administration policy in the security realm. A retired Army lieutenant general, Flynn had been hired by former President Obama as director of the Defense Intelligence Agency and then fired from that post over differences with the Obama team.

Whether it was his interest in closer strategic ties with Russia or his branding of the Middle East terrorist threat as a confrontation with Islam, Flynn had a strong personal agenda, and that hasn’t been the profile of successful White House senior aides during past administrations.

But that was what Trump wanted.

"Setting aside what turned out to be Mr. Flynn’s hanging offense, the plain fact is that temperamentally, he was unsuited to be the national security adviser," said William Galston, a senior fellow at the Brookings Institution and a policy adviser to former President Clinton, "someone who is supposed to be the organizer of a process that includes conflicting points of view, not only his own view."

The Trump Cabinet is still not fully in place, and below the department secretary level the gaps are everywhere. At the Energy Department, there reportedly are 20 or 30 Trump people throughout the department who have arrived on short 120-day transition assignments. Trump’s choice for Energy secretary, former Texas Gov. Rick Perry (R), is waiting for his Senate confirmation.

With holes in his own policy team, Trump and White House aides are fighting against a flood of leaks from inside the government.

White House spokesman Sean Spicer this week pointed almost exclusively to government leaks as the big problem facing the White House, as opposed to the information reporters are uncovering about Trump’s inner circle. "That, I do believe, is a big story that should be reported," Spicer said of the leaks, parroting the president’s public comments and tweets on the matter.

Galston of Brookings said the new president’s struggles are not a surprise. "It’s clear that the interaction of Mr. Trump’s character and his personal history and experience has led him to a conception of how to manage his inner team," Galston said.

"His default setting is obviously for multiple centers of rival powers competing for influence and for his attention," he said. "It is virtually impossible to be an effective chief of staff in these circumstances.

"On the other hand, I think Mr. Trump is aware he has paid a political price in the early going, and unless he is simply set in stone, he is likely to try to adjust to the setbacks he’s experienced," Galston said.

"A lot is going to depend on the willingness to establish more regular hierarchal procedures," he said, "if not in the White House as a whole, then within specific policy sectors."

A large population of career federal employees are not disloyal, one former senior Republican White House official said, but they are parked in neutral. "There are great, committed, highly knowledgeable and ready-to-serve senior civil servants who know this government inside and out," said the former official. "They just need good orchestra conductors. This is all about setting priorities, getting greater transparency, not less, and unifying action among disparate agencies."

It took the Obama administration nearly to the end of its eight-year term, for example, to define responsibilities within the federal government for responding to a massive cyberattack against U.S. infrastructure, including the electric grid.

"To have an effective cybersecurity program," Greenberger said, "you have to have people in place at the sub-Cabinet level.

"How fast are they going to gear up? Are they going to bring people in with critical expertise to those programs, and how long is it going to take to get them in place?" he asked.

A White House directive in July set out a plan for collaboration among the FBI, the Department of Homeland Security and intelligence agencies if a national-level cyber assault should strike. The FBI and the National Cyber Investigative Joint Task Force would lead in threat response, DHS in attack recovery, and the Office of the Director of National Intelligence in attacker identification.

"Significant cyber incidents demand a more coordinated, integrated, and structured response," the Obama White House said when it announced Presidential Policy Directive/PPD-41. People close to the process said turf interests had been the main hurdle in the process.

What Trump will do with that directive remains unclear (Energywire, July 27, 2016).

"Cybersecurity requires an amazing amount of coordination. It’s not just interagency at the federal level," Greenberger said. "It’s working with the states and, more important, working with the private sector," which owns nearly all critical infrastructure assets.

"One important advantage that the Trump administration has is that a strong set of organizational relationships already exists between government and industry that will enable them to build collaboration that reflect administration priorities and concerns," he said.

"Their ability to leverage these relationships will be enormous," he said.

Greenberger said leaders can emerge. DHS Secretary John Kelly could bring in a cyber superstar to steer the ship.

Galston added, "I don’t rule out the possibility that Gary Cohn [director of Trump’s National Economic Council] and a more suitable national security coordinator could bring some order out of chaos. But will the president relinquish the habits of a lifetime? I very much doubt that."