Can Trump nudge Texas to dip into its rainy day fund? 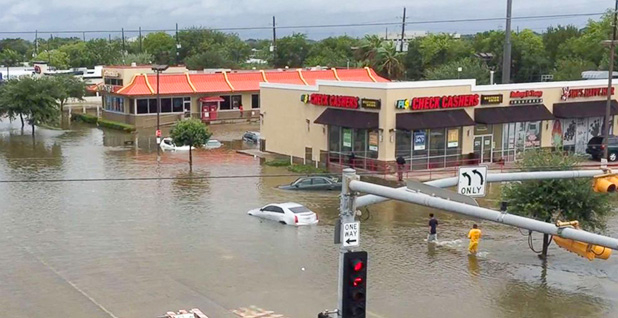 The Trump administration is trying to get Gov. Greg Abbott and the rest of Texas’ GOP leadership to do something they’ve tried to avoid: tap into a $10 billion stockpile known as the rainy day fund.

"We feel strongly that they should step up and play a role and work with the federal government in this process," White House spokeswoman Sarah Huckabee Sanders said last week.

Sanders was defending a $44 billion aid proposal aimed at helping Texas and other areas in the aftermath of 2017 disasters (E&E Daily, Nov. 17). That’s less than the $61 billion Texas alone requested for recovery and mitigation in light of Hurricane Harvey, which struck in late August and caused extensive flooding in Houston.

The White House proposal provoked an outcry from both Democrats and Republicans in Texas and renewed the debate around the rainy day fund. Other states haven’t been asked to use their reserve funds after previous storms, some lawmakers said, and in any case, Abbott had already agreed to use a certain amount of money from the fund for storm recovery. Sanders suggested Texas hadn’t put state money into the process.

"Texas, both at the state and local level, has put tremendous resources into the recovery effort, but the federal government is not stepping up the way it should," U.S. Sen. John Cornyn (R) told radio station KFYO in Lubbock, Texas. "While we’re not looking for a fight, we won’t run away from a fight with the federal government if they don’t treat Texas at least as well as they treated other states following similar natural disasters."

U.S. Rep. Sheila Jackson Lee, a Democrat who represents Houston, "DOES NOT think it is appropriate for the Administration to ask Texas use money from the Rainy Day Fund," spokesman Rucks Russell said in an email. "This was not done for Hurricane Sandy and other disasters."

The Texas Legislature created the fund during the depths of an oil bust in 1988 to help protect the state from the ups and downs of the energy industry. The idea was to save a portion of oil and gas tax revenue during good times and draw down the fund during bad times.

The Economic Stabilization Fund, as it’s formally known, maintained a relatively low balance until 2006, when the fracking boom and high prices produced a glut of tax revenue, according to the state comptroller’s office. It now holds about $10.23 billion, more than any other state, according to the comptroller.

The politicking about how to use the money is common in states that run a budget surplus, said Daniel Raimi, a researcher at the Washington think tank Resources for the Future who has studied reserve funds around the country.

"Anytime there is a pot of money, people are going to want to spend that pot of money on their priorities, and that’s very understandable," he said.

Some oil-and-gas-producing states and countries treat their reserves like a long-term trust fund, building up the principal and only spending the interest, Raimi said. Pulling out funds for one-time expenses, even hurricanes, can be problematic, he said.

‘Houston, we are on our own’

After oil prices crashed in 2014, Abbott and other Republicans largely resisted calls to tap into the fund for education and other priorities (Energywire, Jan. 13, 2015).

Hurricane Harvey, which killed more than 75 people and destroyed buildings along a 300-mile stretch of the coast, prompted some observers to say that the proverbial rainy day had arrived.

Texas Republicans "have sort of talked themselves into paralysis" regarding the rainy day fund, according to Cal Jillson, a professor of political science at Southern Methodist University. He said the federal government’s fulfillment of obligations may happen systematically and include resistance to over-claiming.

Houston Mayor Sylvester Turner (D) called on Abbott to hold a special legislative session to appropriate money from the rainy day fund. Abbott declined but said the state can spend what it needs and then reimburse itself from the fund when lawmakers meet in 2019. He presented Turner with a $50 million check to paper over the rift (Energywire, Oct. 2).

"Houston, we are on our own," he declared while noting the work of city government and nonprofit organizations.

The mayor expressed disappointment over a lack of funds to help avoid preventable flooding, and he criticized the idea of sending federal grant money through state government before it reaches cities. He said the federal government plays a crucial role, so "a mere trickle of money won’t be enough to help Houston heal from a deluge."

The state has spent or incurred more than $1 billion in expenses associated with Harvey, The Texas Tribune reported recently. GOP Reps. Randy Weber, Ted Poe and Blake Farenthold, who represent coastal areas, said the Trump administration’s funding proposal is unfair to their districts.

"It is unprecedented for the federal government to ask any state to subsidize and offset its role in disaster recovery," Poe said.

Ultimately, Congress will decide how much money to spend on this year’s string of disasters. In addition to Hurricane Harvey, the Trump administration has received requests to help Florida and Puerto Rico recover from Hurricanes Irma and Maria and to help rebuild parts of California after a series of wildfires. Texas already has seen billions of federal dollars of aid headed its way after earlier congressional action following Harvey.

Texas may wind up seeing political headwinds because some of its representatives voted against federal funding after Superstorm Sandy struck the East Coast in 2012.

The reality is states always want more money than the federal government is able to give, said Mark Jones, a political science fellow at Rice University’s Baker Institute for Public Policy. That’s especially true this year, when other parts of the United States were affected by hurricanes.

To Jones, the most likely scenario is that Texas eventually draws $2.5 billion to $5 billion from the rainy day fund. That could go toward reimbursing past spending and help with long-term projects such as an additional reservoir in the Houston area. Jones isn’t expecting a special session in Texas on Harvey aid.

He also said the Trump administration’s $44 billion proposal might be an early stance.

"I’m sure we’ll get more than we’re presently being offered," Jones said. "I am also sure we won’t get everything we’re asking for."