Can Trump nuke a hurricane? No one could stop him, legally 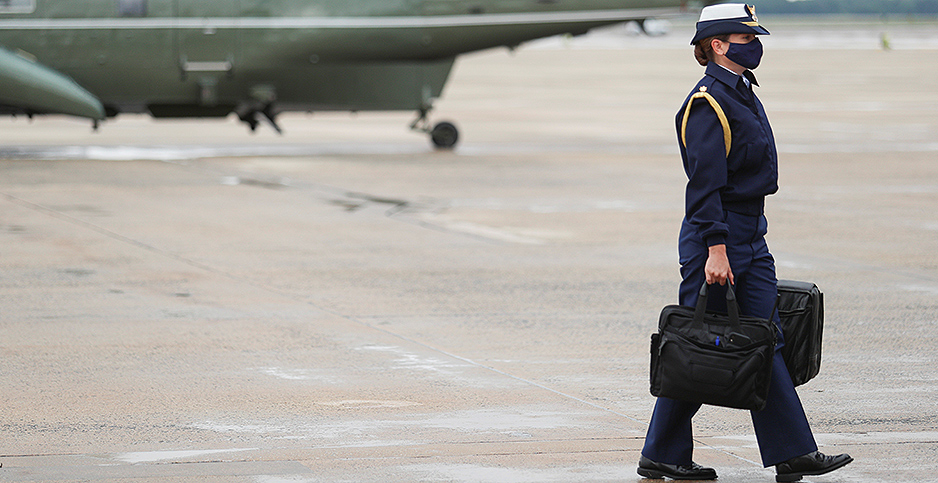 A military aide carries the nuclear launch codes, known as the "nuclear football," to Air Force One for the president's trip to Florida in July. Tom Brenner/Reuters/Newscom

If President Trump wants to shake up the final weeks of his reelection campaign by lobbing a nuclear weapon into a storm, nothing can stop him.

Trump has reportedly said on multiple occasions that bombing hurricanes may be an effective way to disrupt storms, Axios has reported. And while there have been no recent indications to suggest that Trump would embrace the far-fetched scenario, the president has built his career on ostentatious displays of the unexpected.

There are essentially no guardrails on Trump if he decides to flout scientific expertise and bomb a hurricane, said Tom Nichols, a professor at the U.S. Naval War College and a nuclear policy expert, speaking in his personal capacity. In fact, the system is designed to enable Trump to use nuclear weapons, not prevent him.

"The president has the sole authority to authorize nuclear weapons, because he is the commander in chief," Nichols said. "If he wants to fire a nuclear weapon at a hurricane, the only thing that would stop him is somebody disobeying an order."

With the presidential election looming, the nation is experiencing an extraordinarily active hurricane season with 26 named storms, second only to 2005, when 28 storms rose to that level. Florida, an electoral battleground, is one of the states most vulnerable to hurricanes in a season that will continue for another six weeks. Altogether, 10 storms have made U.S. landfall this year, shattering a 104-year-old record.

Epsilon is the latest storm to be named. It formed as a tropical storm in the Atlantic Ocean on Monday and grew into a hurricane late Tuesday night. It’s tracking toward Bermuda and is expected to turn north, potentially missing the U.S. East Coast.

Trump has repeatedly questioned senior administration officials about nuking hurricanes, Axios has reported. The National Security Council also noted the president’s desire to "bomb" hurricanes in a memo written in 2017.

"I got it. I got it. Why don’t we nuke them?" Trump told senior White House officials in 2018, Axios reported. "They start forming off the coast of Africa, as they’re moving across the Atlantic, we drop a bomb inside the eye of the hurricane and it disrupts it. Why can’t we do that?"

After Axios published the story, Trump tweeted that it was "FAKE NEWS."

Trump’s nuclear brainstorm is not a new idea. The nonmilitary use of nuclear weapons has been in consideration since the 1950s and 1960s, said Sharon Squassoni, a nuclear policy expert and professor at George Washington University.

In 1961, the head of the U.S. Weather Bureau, Francis Reichelderfer, suggested his agency might someday acquire its own nuclear arsenal for storm control. In a speech at the National Press Club that year, he said he could "imagine the possibility of someday exploding a nuclear bomb on a hurricane far at sea."

"There were a lot of bad ideas in the 1950s, and I will say if there is one thing that is the hallmark of the Trump administration, it’s like let’s bring back a whole bunch of bad ideas from the 1950s," Squassoni said. "It’s truly bizarre to me, and this is one of the worst ones. Detonating a nuclear weapon in the atmosphere not for a military purpose would violate the [Limited] Test Ban Treaty, and, scientifically, it’s a dumb idea, not particularly controllable."

Squassoni pointed out that there are international restrictions against exploding a nuclear weapon in the atmosphere. The U.S. has not tested a nuclear explosion in the atmosphere since 1963, after which the Limited Test Ban Treaty entered into force, which prohibits nuclear tests in the atmosphere, in outer space and underwater. In 1996, the U.S. signed on to the Comprehensive Nuclear-Test-Ban Treaty.

Detonating a nuclear device at all would be so extreme, Squassoni said, that she hopes that even Trump’s closest aides would stop him.

"I would hope that people in the White House would rather restrain him physically than carry out that kind of order," she said.

The idea of bombing hurricanes is prevalent enough that NOAA has a fact sheet on the concept. This may be the first time in recent American history, however, that a sitting president has suggested the idea.

"During each hurricane season, there always appear suggestions that one should simply use nuclear weapons to try and destroy the storms," NOAA said in a statement. "Apart from the fact that this might not even alter the storm, this approach neglects the problem that the released radioactive fallout would fairly quickly move with the tradewinds to affect land areas and cause devastating environmental problems. Needless to say, this is not a good idea."

What’s more, the power of a nuclear bomb is far less than that of a hurricane, which can put out enough energy every 20 minutes to equal the explosion of a 10-megaton nuclear weapon.

NOAA officials noted that the sheer volume of tropical storms makes bombing them impossible. About 80 storms form every year in the Atlantic basin, but only about five become hurricanes in a typical year.

"There is no way to tell in advance which ones will develop," NOAA officials noted in a statement. "If the energy released in a tropical disturbance were only 10% of that released in a hurricane, it’s still a lot of power, so that the hurricane police would need to dim the whole world’s lights many times a year."

Trump’s idea didn’t escape the attention of Congress. At least one bill has been submitted to block the president from using a nuclear weapon against storms. In June, Rep. Sylvia Garcia (D-Texas) introduced the "Climate Change and Hurricane Correlation and Strategy Act."

The measure would "prohibit the President from deploying any strategic weapon, such as a nuclear bomb, for purposes of altering weather patterns or addressing climate change, and for other purposes."

Garcia is the only sponsor of the bill, and the House hasn’t acted on it.

There is precedent for making plans to intervene if an unstable president seeks to deploy nuclear weapons to distract the public from unsavory political realities. In the final days of the Nixon presidency, Defense Secretary James Schlesinger quietly issued an order requiring that he be notified if Richard Nixon, who was depressed and drinking heavily before he was due to leave office, ordered a nuclear strike.

Schlesinger also prevented the nuclear football from traveling with Nixon in the final moments of his presidency. It was the only known incident in modern times where administration officials sought to remove the president’s authority to issue a nuclear strike. Under the law, Schlesinger potentially perpetrated an act of treason.

Nichols, of the Naval War College, said he is less worried about Trump using the final weeks of the campaign to bomb a hurricane, but he is concerned that the president could attack a foreign country. Earlier this month, during a two-hour appearance on Rush Limbaugh’s radio show, Trump implied that nuclear weapons could be an option for dealing with Iran.

"Iran knows that, and they’ve been put on notice that if you fuck around with us, if you do something bad to us, we are going to do things to you that have never been done before," Trump said.