Can we refreeze the Arctic? Scientists are beginning to ask 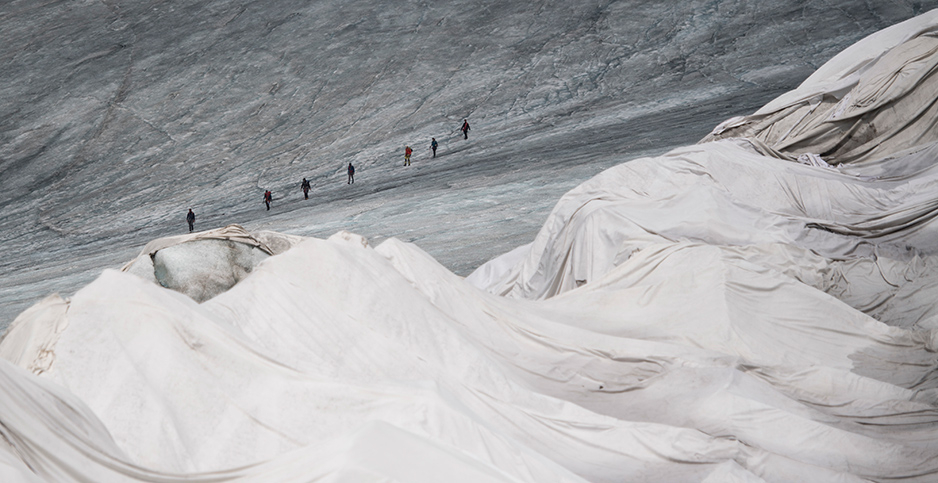 A portion of the Rhône Glacier in Switzerland is covered in blankets to help prevent it from melting. Urs Flueeler/Keystone/Associated Press

Part one of a three-part series.

Each summer, residents of the Swiss Alps make their way through the mountains to the edge of the famous Rhône Glacier. There, fleecy white blankets in hand, they cover up the ice. They’re trying to reflect the sun and prevent the glacier from melting.

The Rhône is one of many glaciers around the world that have noticeably shrunk in recent decades. The blankets are a simple fix, but they seem to help — Swiss glaciologist David Volken has previously suggested to Agence France-Presse that they may reduce melting by up to 70 percent.

Similar protective coverings are used on other glaciers, as well, in places like Italy and Germany — and scientists have begun to propose higher-tech solutions for the future. One research group from Utrecht University hopes to save Switzerland’s Morteratsch Glacier by blowing reflective artificial snow across its surface, a proposal it presented at the annual meeting of the European Geosciences Union last spring. It hopes to eventually secure funding from the Swiss government, after proving the technology in a smaller pilot demonstration.

In a steadily warming world, using technology to protect the planet’s glaciers may only prove useful for so long — curbing greenhouse gases and stopping the warming itself is the only true solution. But some scientists hope that stopgap measures could buy a little time for the world’s ice.

Whether these kinds of technological fixes could be useful on a larger scale — that is, on the vast expanses of land and sea ice at the poles — is another question altogether. But as the clock is ticking, researchers are turning their attention to the ever-more-vulnerable Arctic and Antarctic regions with increasingly ambitious ideas to protect them.

Recent proposals include the use of giant pumps to refreeze vanishing Arctic sea ice — an idea scientists say would not only preserve the landscape but also slow the region’s rapid warming — and building huge mounds on the seafloor aimed at preventing warm water from melting glaciers. A number of these ideas were presented at the American Geophysical Union’s conference in December, as reported by Oceans Deeply.

So far, they’re just ideas. But the concept of polar geoengineering — physically manipulating conditions in the Arctic and Antarctic to try to protect the ice, if only temporarily — has been flickering within the scientific community for years.

In 2009, glaciologist Jason Box of the Geological Survey of Denmark and Greenland suggested covering sections of the Greenland ice sheet with reflective material, similar to the efforts in Europe’s mountain glaciers. He went so far as to demonstrate the process on a small swath of the ice sheet in a project documented on the Discovery Channel’s "Ways to Save the Planet" program.

It’s uncertain whether this relatively simple idea — let alone more complex technological fixes — could ever be applied at a scale that would make a difference across the Arctic or Antarctic. Still, it’s a field that some scientists believe is worth exploring, because what happens at the poles has such great potential to affect the rest of the world.

The Greenland and Antarctic ice sheets hold immense potential to raise global sea levels as they melt, making them the subject of increasing concern among climate scientists. Vanishing sea ice, on the other hand, doesn’t affect sea levels, but it may have a variety of other global consequences. As sea ice melts, it exposes more of the ocean’s surface to the sun, allowing the water to trap more heat and potentially enhancing local warming, which could speed up the melting of the glaciers. Some scientists also believe that amplified warming in the Arctic could affect atmospheric circulation in ways that may disrupt weather patterns elsewhere around the world (although this idea is still widely debated among climate scientists).

The idea of geoengineering as a tool to fight climate change isn’t new, although it’s being raised more and more frequently by scientists and policymakers. Geoengineering can include any number of technological projects aimed at protecting or restoring the Earth’s climate, but it most frequently refers to two specific proposals: the idea of sucking carbon dioxide out of the atmosphere to lower Earth’s temperatures and the idea of spraying cooling aerosols into the atmosphere.

Both of these proposals would involve altering atmospheric conditions on a planetary scale — a feat that would require significant technological advancement to be feasible and much more research on the possible side effects. In the meantime, scientists are turning to more localized forms of geoengineering in their discussions of how to protect the Earth’s most vulnerable areas.

"I think … increasingly we’re going to be looking at regional adaptations that are responding to climate change and trying to adapt to it, but also may have the effect of restoring the region to the climate state that it was in before," said Steven Desch, a physicist at Arizona State University.

Some recent proposals build on the idea of using reflective materials to keep the sun off the ice. The organization Ice911, founded by Stanford University consulting professor Leslie Field, has designed its own reflective artificial snow, made out of silica spheres, and hopes to secure funding to spread the material throughout the Arctic.

In a paper published last year in the journal Earth’s Future, Desch and other colleagues from Arizona State propose the use of wind-powered pumps to draw seawater out of the ocean and onto the surface of the ice. Doing so during the winter would allow the pumped water to refreeze and thicken the existing sea ice, they argue, so that it won’t grow so thin during the warmer months. The researchers presented their idea during the annual conference of the American Geophysical Union in December.

Such a project could potentially help prevent dangerous climate feedbacks in the Arctic, Desch suggests. "Once you melt the sea ice in the summer, it stops reflecting back sunlight, and the ocean starts absorbing sunlight at a high rate — and so it heats up a lot more effectively," he said. "So it’s critical to keep the sea ice there for as long as you could during the summer."

The proposal’s main purpose is to demonstrate that the idea is "not impossible" — the project would likely require years of additional research to actually be put into action. The same is true of most other polar geoengineering projects proposed so far.

Glaciologist Michael Wolovick of Princeton University, for instance, has demonstrated that it wouldn’t be impossible to forestall the melting of land ice, either — at least temporarily. In a proposal, he suggested that some glaciers could be potentially stabilized with the use of an artificial sill — a kind of mound on the ocean floor, perhaps constructed out of sand or rocks — that would block warm ocean water from seeping beneath the ice and melting it from the bottom up.

The research, like Desch’s, is preliminary — "not something that you could actually use to plan a real intervention," Wolovick told E&E News. But he’s used a simplified model to demonstrate that the intervention could potentially be applied to one of the world’s largest and most vulnerable glaciers, Thwaites Glacier in West Antarctica. It holds enough ice to raise global sea levels by about 2 feet if it ever collapsed.

The artificial sill Wolovick envisions wouldn’t last forever. His preliminary simulations suggest that it would likely erode away after a few centuries. It’s a temporary fix, an idea meant to buy time for more permanent climate mitigation efforts — namely, the large-scale reduction of greenhouse gases.

This is an important distinction to make, Desch notes. Many critics of geoengineering have suggested that these kinds of ideas could undermine global climate action by signaling to policymakers that there’s still another way out if they fail to meet their emissions reduction targets. But according to Desch, most geoengineering projects — especially the localized ones — are merely sidebars. They would be ineffective in the long term without serious efforts to mitigate climate change.

For now, most of these ideas are not yet developed enough for serious consideration anyway, said glaciologist Martin Truffer of the University of Alaska, Fairbanks. While it may pay off for scientists to continue exploring new ideas, which could prove valuable one day in the future, "one would have to answer a lot of questions before any of these would be put into place," he said.

These include questions about the technologies themselves — and any potential unintended consequences that may come with them — but also about who would approve, organize and implement the projects. Since multiple nations have territorial claims at the poles, any major geoengineering projects in the Arctic or Antarctic would likely require a collaborative effort.

In this way, Truffer noted, polar geoengineering is not necessarily "a fundamentally different approach" to more widely discussed geoengineering proposals, like carbon capture or the use of aerosols.

"They all open very similar questions," he said.