‘Can we say … climate?’ Agency grapples with Trump’s views 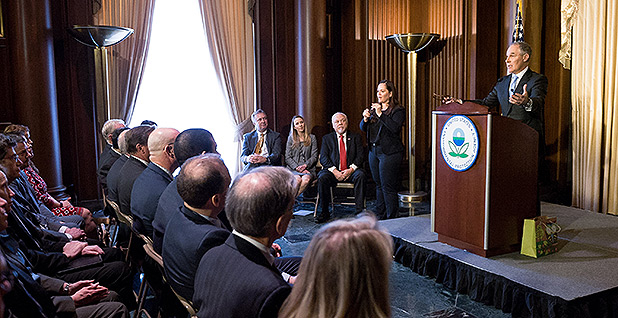 U.S. EPA staffers aren’t sure what to say about climate change in public.

Trump administration officials have taken a drastically different approach to the issue than their Obama-era predecessors. The new political team has trashed Obama climate change regulations, scrapped global warming references from agency websites and played up the uncertainties in mainstream climate science. President Trump has called global warming a hoax.

That’s all left career employees at EPA and other federal agencies unsure about how to approach the thorny political topic, according to interviews with several EPA staffers.

"Some people are asking, ‘Can we say the word climate? Are we talking about climate change? Are we acknowledging that this is real?’" said one EPA career employee who agreed to speak on background.

"Because [EPA Administrator Scott Pruitt] hadn’t talked to us about it, we really have nothing to guide what we know is in bounds with this administration," that person said.

Despite the Trump administration’s efforts to roll back high-profile regulations and scale back the agency’s climate work, many agency staffers are still charged with working on the issue. A few examples: The agency still has a climate change division in its air office, a greenhouse gas reporting program that collects emissions data from industries, and a climate adaptation office in its policy shop.

Their work might seem at odds with Pruitt’s public statements questioning mainstream climate science and suggesting that rising global temperatures might help humans.

Given the sensitivity of the topic, some EPA employees have sought guidance about how to approach climate change without jeopardizing their jobs and their programs. Staffers are particularly uncertain what to say during public speaking events, said the EPA career employee.

In an effort to help, some career employees in the public affairs office drafted a series of climate change talking points last week. The language was pulled from Pruitt’s written responses to questions asked by members of Congress, known as questions from the record — or QFRs — according to an internal EPA email obtained by E&E News.

The March 27 email sent to EPA public affairs directors offered talking points that served as "good examples to share with you for your [regional administrators] to use in speeches."

EPA spokeswoman Liz Bowman said of the language, "The Office of Public Affairs pulled statements from QFRs and sent them around to staff."

Here’s the language that was shared in the email:

EPA recognizes the challenges that communities face in adapting to a changing climate.

EPA works with state, local, and tribal governments to improve infrastructure to protect against the consequences of climate change and natural disasters.

EPA also promotes science that helps inform states, municipalities, and tribes on how to plan for and respond to extreme events and environmental emergencies.

Moving forward, EPA will continue to advance its climate adaptation efforts, and has reconvened the cross-EPA Adaptation Working Group in support of those efforts.

Human activity impacts our changing climate in some manner. The ability to measure with precision the degree and extent of that impact, and what to do about it, are subject to continuing debate and dialogue.

While there has been extensive research and a host of published reports regarding climate change, clear gaps remain including our understanding of the role of human activity and what we can do about it.

As a key regulatory voice, it is important for the Agency to strive for a better understanding of these gaps given their potentially significant influence on our country’s domestic economic viability.

‘Trying to keep his program alive’

Those talking points got a lot of attention last week after HuffPost published an email from a senior EPA career staffer who distributed the language to some of his colleagues.

Joel Scheraga, senior adviser for climate adaptation in EPA’s policy office, wrote that some of his co-workers had "suggested it would be helpful to develop consistent messages about EPA’s climate adaptation efforts that could be used across all Program and Regional Offices," according to the email quoted by HuffPost.

Much of the coverage focused on how EPA’s language emphasized the uncertainties in climate science. The email says that human activity affects climate change in "some manner" and that "clear gaps" remain in the understanding of humans’ role in climate change.

Scheraga was on the team that produced President Obama’s Climate Action Plan, according to his LinkedIn profile. He chaired Obama’s Agency Adaptation Work Group for the Council on Climate Preparedness and Resilience and was an author for the Intergovernmental Panel on Climate Change, which was awarded the 2007 Nobel Peace Prize.

It isn’t unprecedented for EPA staff to offer talking points to try to unify messaging across the sprawling bureaucracy.

The EPA staffer recalled top agency officials being particularly sensitive to how the rank and file discussed hydraulic fracturing, due to sensitivity about the issue among members of Congress.

She said it was surprising that career staffers were sending out the language this time around.

Usually, the political aides in the Office of Public Affairs are "the ones communicating administration messaging, not career staff. That to me seemed different than how we operated," Gannon said.

"You try to work hand in hand and try to stay coordinated on messages," she said.

"But we also believed and followed science and weren’t just trying to spread misinformation on the facts around climate change," she said. "So the messaging is significantly different."