Can Zinke tout an unpopular budget and win over Congress? 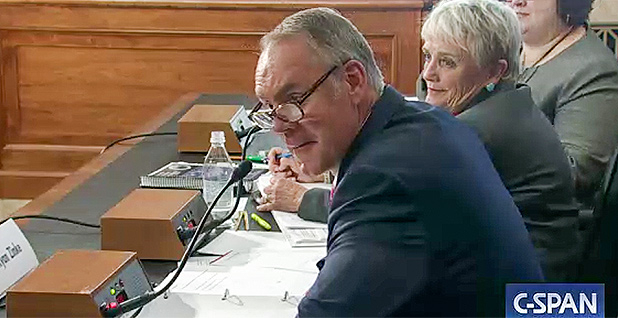 All Cabinet secretaries must traverse Capitol Hill’s thorny terrain during budget season. Their mission: Defend the president’s priorities and simultaneously placate lawmakers from both parties upset about proposed cuts to their favorite programs.

Interior Secretary Ryan Zinke last week deflected questions from three congressional committees on the approximately 13 percent proposed budget reduction his department is facing in fiscal 2018. The seemingly unflappable former Navy SEAL and Montana congressman attempted to sell lawmakers a potpourri of reductions, including an 85 percent reduction to the Land and Water Conservation Fund, a 15 percent decrease to a popular tax program that helps communities with federal lands and the elimination of regional programs including the Great Lakes Restoration Initiative.

Zinke repeatedly told Republicans and Democrats last week that he views the administration’s proposal as "a starting point."

The Montanan — who also appeared before the House and Senate natural resources panels — cheerfully told legislators he would "work with them" on their priorities, whether it was Sen. Chris Van Hollen (D-Md.) fretting over proposed cuts that would affect the Chesapeake Bay, or Louisiana Republican Sen. Bill Cassidy and Rep. Garret Graves determined to preserve an oil and gas revenue-sharing program that benefits Gulf states and assists them with coastal restoration and hurricane protection. The Trump budget would slash that program by $272 million in fiscal 2018.

The Interior secretary received a polite, even warm at times, reception from Democrats as well as Republicans. Rep. William Lacy Clay (D-Mo.) told Zinke he thought it was "cool" that he rode a horse to work his first day on the job during Thursday’s Natural Resources hearing.

Practically speaking, though, how does Zinke champion an unwelcome budget that guts many popular programs and successfully push for more energy production, but also "work with" all lawmakers on their specific priorities?

"It’s easy," Zinke told reporters in response to that question after testifying Wednesday before the Senate Interior, Environment and Related Agencies Appropriations Subcommittee.

"This is what a balanced budget would look like. It’s the first step," he said, right on message. Then he launched into another talking point about the importance of raising revenues through on- and offshore drilling to help pay for things like LWCF and crumbling infrastructure in the country’s national parks. Offshore drilling revenues are the second-largest source of income for the U.S. government after taxes collected by the IRS, but the money goes into the general Treasury (Climatewire, June 26).

Even as Zinke tells lawmakers that the proposed budget before them is the result of "tough" decisions, he effortlessly slips into reassurance mode when they air concerns.

"I’m glad to be here today to go through this," he told the Senate Energy and Natural Resources Committee last Tuesday. "I understand there’s different priorities within each of you and your states. I will always work with you to make sure we have a budget that represents that recognition."

Not everyone is so optimistic.

"These guys craft a piece of crap like this budget, and then they expect the secretaries to defend it," Sen. Jon Tester (D-Mont.) told E&E News last week.

Tester sits on the Interior, Environment and Related Agencies Appropriations Subcommittee, one of the panels Zinke came before last week. "I just don’t know who is running the show over at Interior," he added. "We’ll see what he [Zinke] does between now and then, but if they put out a budget this bad and expect us to fix all of it, I don’t think it’s going to be possible."

Even Sen. Lisa Murkowski (R-Alaska), who leads the ENR panel as well as the Interior Appropriations Subcommittee, and likes parts of the budget, conceded during last week’s hearing that she doesn’t expect Congress to go along with many of the administration’s proposed cuts to the department, "especially those targeting popular programs."

In particular, Murkowski views the cut to the payments in lieu of taxes program as a nonstarter (E&E Daily, May 26). She also is not a fan of the 13 percent overall cut to the Bureau of Indian Affairs.

Still, she said she believes that Zinke can "absolutely" defend the president’s budget and negotiate with lawmakers at the same time.

"He committed to working with us on a lot of these high-priority issues," Murkowski said after the Wednesday appropriations hearing.

Sen. Lamar Alexander (R-Tenn.), an appropriator, said he disagreed with Zinke’s characterization of the budget proposal.

"This is not a balanced budget," said Alexander, adding that mandatory spending — programs like Social Security and Medicare — is the part of the $2.7 trillion budget that is "out of control." Alexander said until that changes, funding for things like national parks, laboratories and the National Institutes of Health "will be squeezed into nothing."

There was Rep. Bruce Westerman (R-Ark.) asking about cuts to LWCF; freshman Rep. Jimmy Panetta (D-Calif.) querying Zinke about the "lack of funding and resources" for Bureau of Land Management employees in his district; and an exchange with Rep. Jack Bergman (R-Mich.) over the proper management of the double-crested cormorant and the risk the species poses to the fishing industry in northern Michigan.

Keeping track of it all is daunting. Zinke told Bergman he’d get back to him on the troublesome double-crested cormorant. "I will look into it. This is the first I have heard of this particular issue," the secretary said.

Zinke’s confidence navigating tricky conversations with members likely will be an asset in public and private budget negotiations.

Graves, the Louisiana congressman, asked Zinke for the opportunity to meet with him and explain why the offshore revenue-sharing program created by the 2006 Gulf of Mexico Energy Security Act (GOMESA) is not just critical to the region, but "an important reinvestment in revenues" overall.

"I look forward to working with you on it," Zinke said. Then he added, "I think you would be a magnificent governor of Louisiana. No one represents the state of Louisiana better than you," prompting some knowing chuckles. Graves is a frequent critic of current Louisiana Gov. John Bel Edwards (D), who is up for re-election in 2019.

Zinke assured Graves that he understood the importance of the law: "I get the GOMESA."

Tester had a different take on the other side of the Capitol. "Sure, you can be confident," he said of Zinke. "But you’re leading the train over the cliff. It’s not good. I mean, it’s not good."