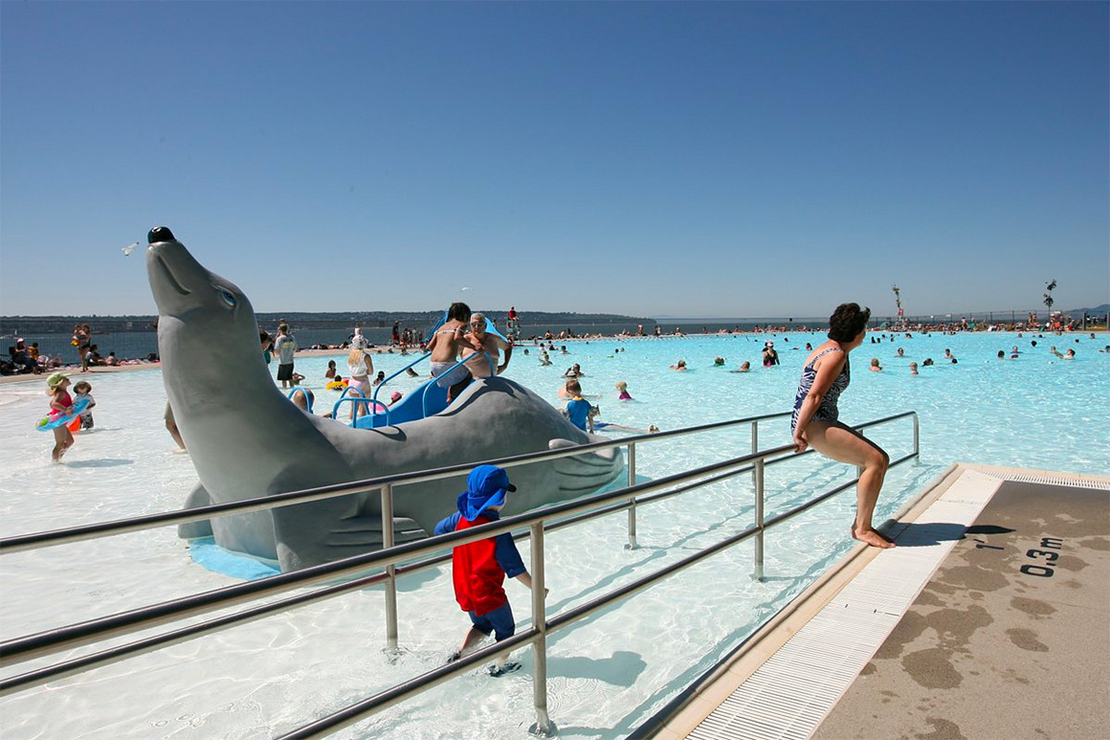 Sunbathers relax at a pool in Vancouver, British Columbia. Vancouver Board of Parks and Recreation (@ParkBoard)/Twitter

Canada is debating the question, and climate activists aren’t the only ones pressing the issue.

A coalition representing private- and public-sector interests — including insurance companies, the Canadian Chamber of Commerce, the Federation of Canadian Municipalities and the Canadian Red Cross — last week said the national government should put summer cooling on par with winter heating as a fundamental right for 38 million Canadians.

The coalition, dubbed Climate Proof Canada, is one of several organizations leaning on government officials as they draft Canada’s National Adaptation Strategy. The plan is expected to be rolled out in November at the United Nations’ international climate conference in Egypt.

“We’re looking at the right to live in a safe environment, and extreme heat has moved very much up the agenda,” said Joanna Eyquem, managing director of climate-resilient infrastructure at the University of Waterloo’s Intact Centre on Climate Adaptation, in a telephone interview. “We need to shift Canada from a cold-climate mindset to a hot-climate mindset to prevent more deaths.”

Health risks from extreme heat are growing into a global problem — including in places not accustomed to sweltering temperatures. For example, the United Kingdom, parts of Europe and Japan earlier this year endured triple-digit heat bubbles.

It’s a similar story in North America. A summer heat wave in the Pacific Northwest last year killed more than 1,200 people in the United States and Western Canada, according to government and independent estimates.

Roughly 60 percent of Canadian homes had some form of air conditioning in 2019, according to Statistics Canada. But access to cooling varies by geography, Eyquem said. Provinces such as British Columbia have the lowest rates of installed air conditioning compared to midcontinent and eastern provinces like Ontario and Quebec.

That fact was painfully borne out by the June 2021 heat wave.

A recent review panel report to the chief coroner of British Columbia attributed 619 deaths to the unprecedented heat dome that sent temperatures above 120 degrees Fahrenheit. “Most of the deceased were older adults with compromised health due to multiple chronic diseases and who lived alone,” the reviewers found.

Groups like Human Rights Watch were quick to point out the deficiencies. “British [Columbia] does not have a heat action plan, and lack of access to cooling and targeted support for at-risk populations contributed to unnecessary suffering and possibly deaths,” the group wrote in a post-disaster report last October.

The United Nations Human Rights Council in 2019 adopted a resolution affirming that climate change “has already had an adverse impact on the full and effective enjoyment of the human rights enshrined in the Universal Declaration of Human Rights,” with particular implications for the poor, elderly and health compromised.

Yet even as heat deaths pile up, Climate Proof Canada says the government’s actions to protect citizens from extreme heat and other acute climate change impacts has been plodding and “focuses on vague and distant goals without any national plan to address them.”

“While the longer-term impacts of the climate crisis must be addressed, considering the increasing number of extreme weather events already occurring across Canada, we cannot wait until 2030 to limit the impacts of climate change in this country,” the group said in a statement.

A 2021 survey by Ontario officials found that 90 long-term care facilities, or 14 percent of all such facilities, lacked air conditioning. It prompted passage of a law requiring all resident rooms to have installed air conditioning by June 2022. In August, the ministry fined two facilities $1,100 Canadian dollars each for noncompliance.

The Federation of Canadian Municipalities, in written recommendations to Environment and Climate Change Canada, which is drafting the national adaptation plan, said an increase in heat waves under global warming “could be deadly” for those “who cannot afford suitable housing or air conditioning.”

Yet to date, much of the government’s efforts on extreme heat have focused on alerts and emergency response, not on expanding access to residential air conditioning, something climate advocates said could be done relatively cheaply.

In Ontario, for example, regulations stipulate that owners of rental properties must maintain vital utility services — including electricity, natural gas and hot and cold water — to meet a minimum air temperature of 69.8 degrees from September to June.

Landlords do not, however, have to provide air conditioning under provincial law, experts say. Air conditioning rights may be included in rental contract, according to Ontario law, but the government does not consider cooling a “vital service.”

Some municipalities across Canada have passed laws requiring that new multifamily residential units have air conditioning. The Vancouver City Council, for example, recently approved a “cooling requirement” that by 2025 all new multifamily residential buildings three stories or higher — or exceeding 6,500 square feet — must provide air conditioning.