Canada has too much clean electricity. Anybody want it? 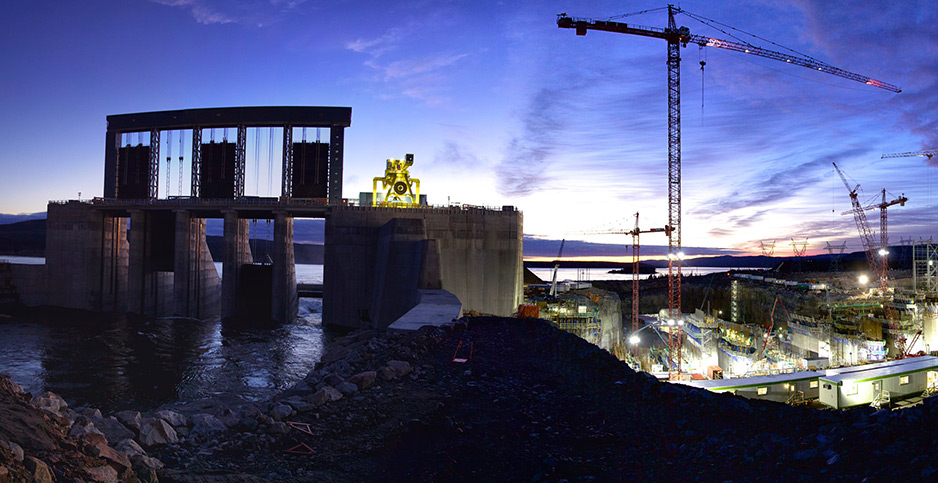 The spillway and powerhouse are under construction at Muskrat Falls, an 800-megawatt hydropower dam in the Canadian province of Newfoundland and Labrador that will probably send its electrons to New England. Alberto Audisio/Nalcor Energy

Canada, a country that runs on almost 60 percent hydropower, has a problem: It has more clean electricity than it can use, and a whole lot more of it is on the way.

So, with a boldness that seems hardly Canadian, the country’s utilities are hustling to sell it into U.S. markets. They are proposing to build new transmission lines and send many terawatt-hours (TWh) of low-carbon electricity a year into the United States — especially in the Northeast, where it may be key to helping states meet ambitious goals for clean energy.

At the same time, the Canadian electricity industry is working to soothe the protectionist anxieties of the Trump administration, which could upend the economics of electricity with changes to the North American Free Trade Agreement (NAFTA).

"Canada must help the Administration find ways to transform these anxieties into opportunities for them and for us," wrote the Canadian Electricity Association, which took an April trip to Washington, D.C., to sound out the new regime.

"Our story of friendly, dependable, reliable, secure, low cost, and clean electricity as a key input to U.S. economic success, does resonate," the Canadian Electricity Association said. "We need to repeat, repeat, repeat."

That strategy appears to be working, since electricity doesn’t appear to be a sticking point in NAFTA renegotiation talks.

It is a role that has been quietly growing. According to ISO New England, which coordinates electricity deliveries across six Northeastern states, Canadian net imports rose from 12.4 gigawatt-hours in 2011 to 17.1 GWh last year, an increase of 27 percent. For the Midcontinent Independent System Operator (MISO), which oversees markets in 15 U.S. states and Manitoba, net imports from Canada in the same period climbed from 13.2 megawatt-hours to 21.6 MWh, an increase of 38 percent.

Those numbers are poised to grow a whole lot more, as big new transmission lines are being built that connect Manitoba to Minnesota, and Ontario to Pennsylvania. Meanwhile, Massachusetts and New York are drawing energy road maps that will require large amounts of carbon-free electricity.

For Canada’s power companies, it’s hard to overstate the importance of the American market. A strategic error has left them with few other options.

A decade or more ago, several of Canada’s biggest utilities sized up the market and saw a need for enormous new hydroelectric dams. "They looked at prices in the U.S., and they said, ‘Wow, we can make a lot of money,’" said Pierre-Olivier Pineau, a professor who studies electricity markets at HEC Montréal, a business school in Quebec’s largest city.

Electricity at the time was selling in the United States for 8 or 9 cents a kilowatt. Canada’s producers knew they could sell hydropower for about 6 cents. To meet that demand by 2020, they would need to start building.

And build they did. Canada’s principal utilities are "crown corporations," entities owned by the province that return profits to the province. (Some are now privatizing.)

The power companies looked to large rivers, situated in the remote northern reaches of Quebec, Manitoba and Labrador. They started the long process of stopping them up to build new power plants. They also charted new transmission lines, to deliver hydropower south, to near the U.S. border and to their own population centers, where they also predicted strong electricity demand.

Few of those bets went as the power companies planned.

The use of horizontal drilling and hydraulic fracturing, or fracking, flooded the U.S. market with natural gas and dropped the cost of gas-fired electricity generation to historic lows — about 3 to 5 cents, quite a bit cheaper than Canadian hydro. At the same time, U.S. wind and solar plummeted in price.

Meanwhile, Canada’s domestic surge in demand didn’t materialize. Efficiency measures have made homes use less energy, and the Great Recession shut down many heavy industries, like pulp and paper mills, that were major power users.

Though much of the economic rationale for Canada’s hydro dams has evaporated, the projects themselves are grinding forward at great expense.

Four of the country’s seven most expensive infrastructure projects of the year are hydroelectric dams, at a price tag of 30.7 billion U.S. dollars. They include Labrador’s Muskrat Falls ($7.4 billion) and British Columbia’s Site C ($7.1 billion), as well as Quebec’s Romaine Complex and Manitoba’s Keeyask dam (both about $5.2 billion).

By the early 2020s, the projects in the eastern half of the country — in Labrador, Quebec and Manitoba — will deliver more than 2,000 megawatts of new electricity to the power grid.

Part of that will go to meet Canada’s ambitious goals for decarbonizing its economy. In November, the federal government announced its intention to wean itself entirely off coal by 2030.

And utilities are nurturing new markets for electricity internally, such as data centers in Quebec. They are preparing for "a second era of electrification," said Werner Antweiler, a professor of trade and energy at the University of British Columbia. That includes advocating for a robust electric-car infrastructure that could lower carbon emissions — and give Canadian hydroelectricity somewhere to go.

‘Sold for next to nothing’

In the meantime, though, Canadian utilities are hurting.

A few months ago, Manitoba Hydro, the principal power company of that province, made a tough decision to not abandon its Keeyask dam, which is plagued with escalating costs. With its debt mounting, the company laid off 900 people and jacked up its customers’ rates. "This has been a challenging year," its chairman, H. Sanford Riley, wrote in a blunt report.

Part of the challenge will be softened by an agreement it struck in 2010 with Minnesota Power, a utility serving the northeastern part of that state, to send it 250 MW of Manitoba’s hydropower. In an innovative arrangement, Minnesota Power will also deliver its wind power to Manitoba.

David McMillan, an executive vice president at Minnesota Power, said he’s proud of the deal. But, he added, it came at a premium.

"The biggest challenge to Canadian exporters is the price of natural gas," he said. "Canadian hydro is not cheap."

In Labrador, construction is underway on Nalcor Energy’s Muskrat Falls project, a new 824-MW hydro dam with the startling price tag of $7.4 billion. Two-thirds of its output is meant for Canadian use.

It’s the remainder that’s the problem.

"The remaining one-third was supposed to be sold into the market at a big profit, but energy prices have collapsed in the [U.S.] Northeast, and it will be sold for next to nothing,’ said Nalcor’s CEO, Stan Marshall, in an interview last year with the Canadian Press.

Many believe that the dams, which could operate for a century or more, will have long-term value.

"Our country has a history of making difficult resource development decisions that are questioned at the time but are valued by future generations," said Devin McCarthy, a vice president at the Canadian Electricity Association.

But between now and those future generations lies a crunch that Canada’s utilities will have to work hard to fill.

Working hardest is Hydro-Québec, the largest hydro producer on the continent, which boasts that it could singlehandedly power the state of New York and calls itself "the battery of North America." According to its annual report, it will have 11.3 terawatts of power available every year for the next decade.

"We are consequently making major efforts to negotiate new long-term contracts for electricity sales to neighboring systems, where ambitious emission reduction targets have been set," the report said.

With many coal and nuclear power plants slated for retirement in northern U.S. states, Canadian hydro producers see an opportunity. Hydro-Québec’s prime targets are Massachusetts and New York, where big plans to reduce carbon emissions might dovetail with what Canada has to offer.

Massachusetts is seeking an enormous 9.45 TWh of carbon-free electricity, part of an energy bill the state passed last year that also calls for large amounts of offshore wind (Climatewire, June 30). Dozens of projects applied for the non-offshore-wind part earlier this year.

Some of the largest proposals came from Hydro-Québec, which partnered with energy companies in New England to meet almost the entire demand with Canadian electricity.

With Eversource Energy, it proposed Northern Pass, a line that would deliver 9.4 TWh a year through the White Mountains of New Hampshire. With Avangrid, it proposed New England Clean Energy Connect, which would route 1,200 MW through western Maine. With TDI New England, a subsidiary of private equity firm the Blackstone Group, it proposed the New England Clean Power Link, which would send 1,000 MW of hydropower via underwater cable across Lake Champlain. Each proposal includes an option that replaces a portion of hydro with Canadian wind power.

Meanwhile, Emera Inc., the principal utility of the Canadian province of Nova Scotia, proposed Atlantic Link, a $1.6 billion, 375-mile undersea transmission line to deliver wind and hydro power from Canada’s province of New Brunswick to Plymouth, Mass. It would emerge, not coincidentally, near the retiring Pilgrim Nuclear Power Station, which will be shuttered in 2019.

The winners in Massachusetts will be announced Jan. 25.

Massachusetts may like what it sees in the Canadian proposals, since New England’s energy prices are some of the highest in the nation. "If they look at Canadian hydro and imports, they can achieve the same goal at a significantly lower cost," Pineau said.

A similar, if smaller, situation unfolded two weeks ago in New York state, which is seeking 1 TWh a year of clean energy. Hydro-Québec submitted two proposals. One would have the Canadian utility provide 700 GWh, seven-tenths of the need, by making an upgrade to an existing cross-border transmission line.

But the second proposal blew the first one out of the water. It suggests that Hydro-Québec supply somewhere between 5.8 and 8.3 TWh a year — five to eight times what New York asked for. It’s a sign of how seriously Canada wants a piece of the action.