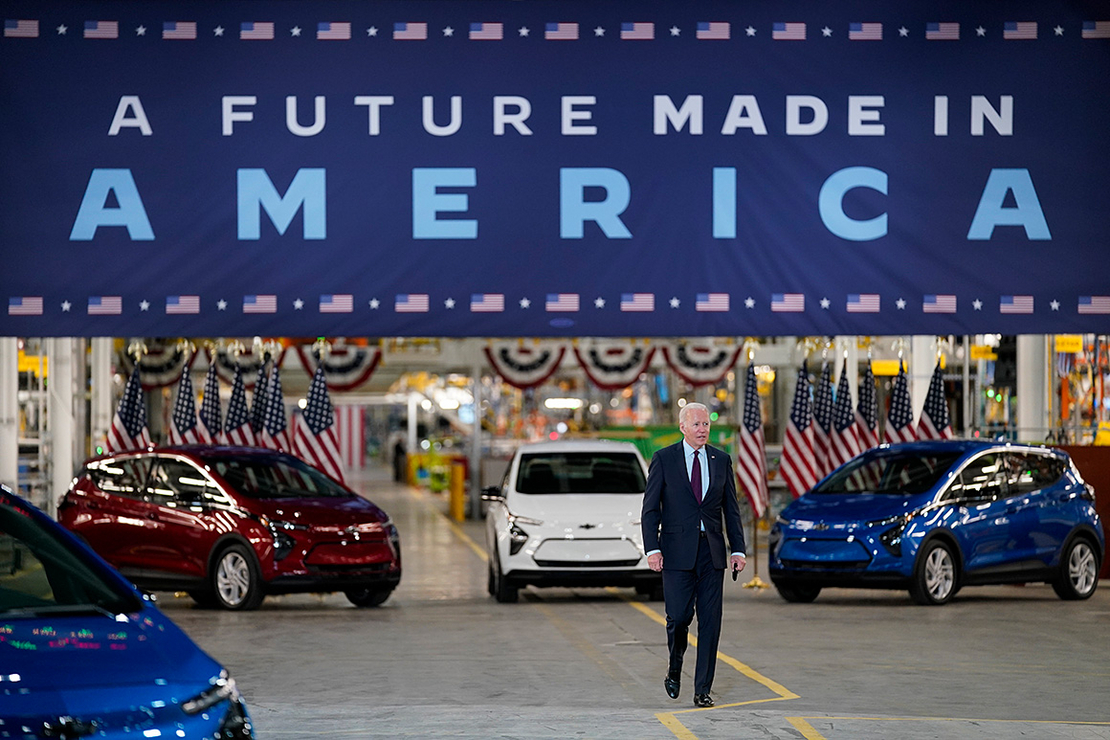 President Biden plans to meet with the leaders of Canada and Mexico today where he is expected to receive pushback over his proposed electric vehicle tax credits and “Buy American” policies.

The opposition to Biden’s cornerstone climate policy from two of the country’s largest trading partners is further complicating the administration’s decarbonization plan, which has already been significantly pared back due to Democratic in-fighting.

Biden’s scaled-down $1.75 trillion social spending and climate bill currently moving through Congress would allocate up to $12,500 in incentives for electric vehicles made in the United States, including a $4,500 credit for union-made cars and trucks.

The proposal’s backers include environmental groups and labor unions, who say the measure would spur widespread EV adoption while boosting domestic jobs and higher salaries. The transportation sector is the single largest source of greenhouse gas emissions in the country, with passenger vehicles accounting for the bulk of the heat-trapping pollution.

The auto industry, however, remains divided with nonunionized and foreign automakers leading the charge against the tax provision (Climatewire, Oct. 29).

“This seems to kind of fly in the face of at least the spirit, and in a lot of people’s opinion, the technicalities of the renegotiated [North American Free Trade Agreement] agreement,” said David Perry, vice president and senior analyst of the Canadian Global Affairs Institute.

Negotiated under the Trump administration, the United States-Mexico-Canada Agreement (USMCA) — or NAFTA 2.0 — effectively prohibits the United States from issuing subsidies for traded goods that favor domestic commodities over imported goods. The same prohibition is spelled out in World Trade Organization agreements.

A tax incentive for electric vehicles made in the United States likely would be considered a prohibited subsidy, said Jennifer Hillman, senior fellow for trade and international political economy at the Council on Foreign Relations (CFR).

Hillman, who served on the WTO’s highest court, said it’s possible the Biden administration would argue the tax incentive is only prohibited if it benefits car and truck makers, not EV buyers.

“In theory, this kind of a tax credit is a subsidy to the consumer,” she said. “That may be their argument because, in general, the subsidy disciplines are around a financial contribution effectively made to a producer.”

Trudeau told the Canadian press earlier this week he would use the opportunity to stress the importance of the two countries’ integrated supply chain and push back on efforts that would disentangle them.

The North American motor vehicle industry is highly integrated. Across the continent, hundreds of supply manufacturers provide thousands of vehicle parts, often crossing the borders seven or eight times before full assembly, according to a Congressional Research Service report.

Business leaders in all three countries have voiced concern over the proposal. In a statement released earlier this week, Lance Fritz, chair of the U.S. Business Roundtable, urged the three leaders to prioritize North American competitiveness as a whole. Don Lindsay, chair of the Business Council of Canada, and Juan Gallardo Thurlow, head of the Business Roundtable of Mexico, also signed onto the statement.

“All three organizations urge the leaders to work together on a comprehensive economic partnership and trilateral North American agenda,” they wrote.

Boosting U.S. manufacturing could cut both ways, Perry said. While the Canadian automotive industry is the fourth most significant sector in terms of overall good exports, there are a significant number of states in the United States whose largest export market is Canada.

“So it’s very much that both countries have benefited from building things together, and if [the U.S.] tries to unbundle that, I think Canadian governments would feel like they’d have to take retaliatory measures,” he said.

If Canada and Mexico feel the United States has violated the trade agreement, they can launch a formal complaint, which would be adjudicated by a USMCA panel, Hillman said. She is currently serving as a panelist on another U.S.-Canada dispute.