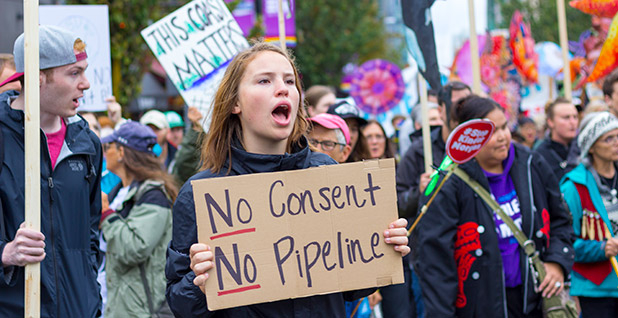 "We think this is a great day not only for our company but for Canada," Kinder Morgan CEO Steve Kean said on a conference call.

Kinder Morgan has been trying since 2012 to build a second pipeline alongside its existing Trans Mountain line from Alberta to the Vancouver area, which would nearly triple the system’s capacity to about 900,000 barrels a day. It’s the only pipeline that connects the oil sands fields to the ocean, and expanding it would allow larger oil shipments to Asia (Energywire, May 21).

Trudeau has committed to reducing Canada’s greenhouse gas emissions to help fight global climate change but has also supported production of Canada’s oil sands in Alberta, which produce more pollution than other forms of crude. In 2016, he authorized construction of the Trans Mountain line and another line into Minnesota to help export the region’s crude (Energywire, Nov. 30, 2016).

"It is unforgivable that the Canadian government is doubling down on this project," said Rachel Rye Butler, an organizer for Greenpeace.

The sale will relieve Kinder Morgan of a substantial risk — the cost of the Trans Mountain plan has grown with the delays — and it will be able to use the proceeds to reduce its debt.