Candidates put their own spin on climate message 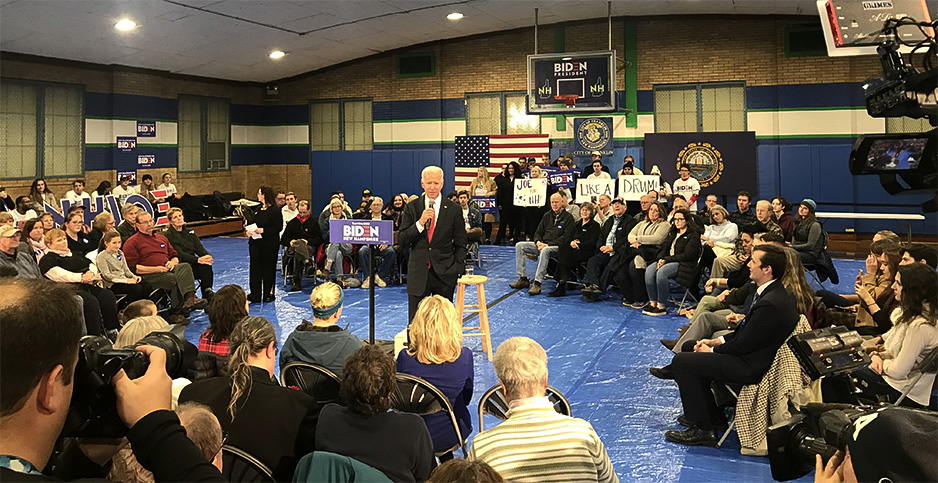 "I introduced the first climate change bill … back in 1986," he said during a recent town hall event here.

"We’re in a position where we should be doing what we did in our administration, which we did in the Recovery Act," Biden said of the 2009 stimulus. "We invested more money in renewable energy than any administration ever has," he said.

"Since then, the problem has grown urgent, more difficult," he said, referring to his climate initial work 33 years ago. "We’ve moved far beyond it. It’s moving quickly. And we have to keep pace with it."

On the Paris Agreement, Biden said he’d work quickly to "up the ante," and push the nearly 200 nations that signed on to it to increase their ambition.

"What I would do is call a meeting of the 173 nations that signed on and say, ‘You’ve got to up the ante; here’s the deal. And when you don’t up the ante, here’s the price you’re going to pay: The rest of us are not going to import your products,’" he said during another event at Colby-Sawyer College in New London, N.H.

“It’s here. And we will be judged on whether we solved the problem.”

"It’s here. And we will be judged on whether we solved the problem," Buttigieg said in a Lebanon, N.H., town hall with more than 1,000 attendees.

"You want to understand the climate crisis we face today? It’s 25 years of corruption in Washington that brought us here."

Warren, for one, didn’t bring up her climate plan at all during her Exeter town hall or at a Nov. 13 rally after filing her state paperwork, except to say she would "end lobbying as we know it" and "block the revolving door between Wall Street and Washington."

"I set out a plan … that calls for net-zero carbon emissions by 2050, but locks in by 2030 institutional changes that can’t be altered," Biden said, briefly mentioning his desire to expand high-speed rail and reward farmers for planting crops that sequester carbon.

"I’ve got a plan, starting with aggressive action to double the amount of renewable energy on the grid by 2025, which we need to do," said Buttigieg.

The most high-profile and controversial aspect of Andrew Yang’s climate plan is his push to explore geoengineering strategies such as massive space mirrors and to develop new nuclear power technologies like thorium reactors.

"We need to put a price on pollution," said the entrepreneur-turned-candidate. "Then we need to take the subsidies that we’re giving to fossil fuel companies, and say, ‘That’s dumb,’ and move them to wind and solar and renewable energy companies."

A senior adviser to Yang told E&E News that he recognizes some of Yang’s climate proposals are controversial, but they’re necessary.

"The level of urgency requires an all-hands-on-deck, all-of-the-above approach that is aggressive, it requires significant federal investment, and it requires intensity, because even if we were to get everything right starting today, there are impacts from what has already occurred that we’re dealing with," said Steve Marchand, the former mayor of Portsmouth, N.H.

"It’s a recognition that we have to do homework to see what is possible. It’s not because we know; it’s because we don’t know. So we have to invest money in R&D."

It’s not just the leading candidates who talk about climate change.

"Fire seasons in the West are 78 days longer than they were 40 years ago. We’re outdoorspeople. Our farmers have different planting seasons by this point than not that long ago," Bullock said.

"The fact that we have a relationship with Saudi Arabia that’s based upon oil, as much as anything else, to me, is a sign of where we do not want to be in the future," he said.

"Trying to combat climate change, for me, is [an] existential threat, job one, because if things continue to accelerate around climate change, the level of damage it’s going to do to our way of life is almost unthinkable and staggering," Yang continued. "None of this stuff is speculative anymore; it’s already happening."

Rep. Tulsi Gabbard didn’t discuss the issue during an appearance in Lebanon, N.H., before a small, tightly packed group in a restaurant.

The Hawaii Democrat, who in recent weeks has publicly butted heads with former Democratic presidential nominee Hillary Clinton over Clinton’s assertion that Gabbard is a "Russian asset," talked about clean air and water, but not climate.

"As we look at challenges that we face in our local communities — infrastructure needs, health care, education, protection of our environment — too often, we, the people, are told there’s just not enough money," she said as part of an explanation for why she opposes many of the wars the United States has participated in.

"It’d be priority one. If it’s not No. 1, it’s not going to get done," he said in Concord, N.H., shortly after filing paperwork with state officials to run in the primary. "I’d declare a state of emergency and start working on it on the first day, with the emergency powers of the presidency" (E&E Daily, Nov. 15).

For Weld, the sweet spot is balancing his criticism of Trump’s climate policy rollbacks with criticism of the Democrats’ approaches that involve spending trillions of dollars.

"They seem, many of them, to have only a sticker price — $16.3 trillion for Sen. [Bernie] Sanders [I-Vt.], and then on down from there," Weld told reporters after filing his paperwork Nov. 13, referring to the Democrats’ climate plans.

"It’s not a command-and-control proposition at all," Weld said. "It’s no one telling the United States, ‘You have to shoot Bessie the cow or not use airplanes anymore.’ It’s just a matter of getting carbon out of the atmosphere."