Candidates saying little about climate. Does it matter? 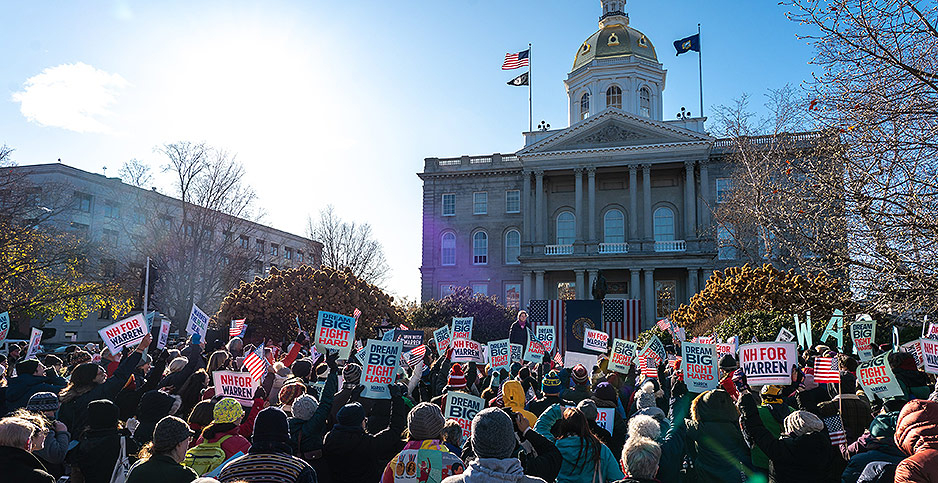 Fourth in a series of reports on the 2020 presidential race from New Hampshire, which holds the first primary. Read the other stories here, here and here.

FRANKLIN, N.H. — Democratic voters here are eager to pick a president who wants to aggressively fight climate change but feel that the primary field isn’t talking enough about the issue.

Numerous voters who spoke to E&E News said in campaign appearances, advertising and other media, climate isn’t getting as much attention as issues such as health care and corruption.

"They’re not talking much about climate change, which they should be," said resident Janet Mayo-Smith. "I don’t really know what their differences are."

Lori Budington of Sanbornton, about a 10-minute drive from here, agreed.

"I’ve paid attention to Medicare and other things, because they’re all promoting them," she said. "I actually don’t know the differences between any of their plans on climate change. That’s the one thing I don’t know about."

Climate change has, in many ways, taken an unprecedented role in the 2020 election.

Spurred by factors such as President Trump’s aggressive environmental policy rollbacks and a series of dire reports about the ongoing impacts of global warming, nearly all major presidential hopefuls have put out detailed plans for combating climate change, and they’re finding ways to bring it up in debates and other venues.

But people in one of the first states to formally weigh in on the election — a Feb. 11 first-in-the-nation primary that sets the course for the rest of the election season and can make or break candidates — say they’re not hearing very much.

"It’s important and something needs to get done," said Lisa Gove of Penacook, regarding climate change. "But I don’t really know what their plans are. I haven’t heard much."

In a series of recent New Hampshire town halls and rallies, candidates usually talked about climate, but with few specifics of their plans (E&E Daily, Nov. 19).

The perception that climate is getting the short shrift may be because candidates don’t think it’s an issue that can set them apart from the pack, said Michael Ettlinger, director of the Carsey School of Public Policy at the University of New Hampshire.

"To the extent that they do have different approaches, it’s kind of eye-glazing for most of the audience," Ettlinger said, noting that all of the major Democratic candidates have a goal of getting the United States to be carbon neutral at some point in the future, want to put some sort of price on carbon and want to spend money on clean energy.

Ettlinger added if voters feel that climate change is an existential crisis, no amount of speaking about the issue would likely be enough.

A CBS News poll in September found that 72% of Democratic voters considered climate change to be "very important," ranking No. 2, below only health care, among the policy areas polled. Twenty-two percent said a candidate must share his or her views on climate in order to get support.

Polling commissioned by the Sierra Club shows that candidate preferences among voters who consider climate "very important" align generally with overall polling in the Democratic field.

In the latest version of its poll, conducted earlier this month, the group found former Vice President Joe Biden led the field among those dubbed "climate voters," with 32% support. Massachusetts Sen. Elizabeth Warren followed at 24%; Vermont Sen. Bernie Sanders had 11%; and South Bend, Ind., Mayor Pete Buttigieg was also at 11%.

Similarly, a July poll from CNN and UNH found that climate ranked second in terms of the most common issues that New Hampshire Democratic voters identified as their most important issue, at 14%, behind only health care at 20%.

But while voters in New Hampshire wanted to hear more from candidates on climate, they acknowledged that the differences among presidential hopefuls’ climate plans is not very important.

"I think most of them are pretty acceptable. I’m not opposed to any of them. Each one has their own flair that makes it their own," said Adam Richards, a student at New England College who supports businessman Andrew Yang — who wants to put a price on carbon and invest in research and development in areas like geoengineering and new nuclear power technology — but is open to other candidates if Yang drops out.

"More than the specific differences between plans, it’s the prioritization and political capital that you’re going to give to it," said Joe Gladow of Hanover.

Many voters said the substance of climate plans isn’t nearly as important as a dedication to taking climate much more seriously than President Trump.

"I want them to have an understanding of what it means to them, and some integrity in the plan they have — not just a lot of hot air," said Craig Vickers of Walpole.

"A hard turn away from what Trump’s doing is important, but then you’ve got to take it the next step. I think you need an aggressive agenda, beyond undoing what Trump is doing," said Rick Cawley of Hanover.

And even strong supporters of particular candidates are not overly concerned with the particulars of their plans.

"He sets realistic expectations for himself and for what he can get done. He’s not telling us what we want to hear," said Molly O’Hannigan, a resident of nearby Barnard, Vt., who came to a Buttigieg town hall in nearby Walpole, N.H.

His plan includes a major boost to clean energy spending and a price on carbon. "The way he approaches things is that he’s open to collaboration, instead of ‘this is what’s going to happen, this is what I’m going to do,’" O’Hannigan said.

Gene Faltus of Swanzey, however, has every confidence Biden is best suited to address climate issues.

"Joe is going to do great on everything. Climate change, he has a policy, it’s going to work, it’s going to be the best for all of us, and I love Joe," Faltus said. The former vice president wants to put federal money into areas such clean energy and electric vehicle charging infrastructure but doesn’t want to ban fracking, like some others in the field.

Asked what makes Biden’s climate plan the best, Faltus said, "his experience. He’s been there. He knows he’s not going to put businesses out of business."