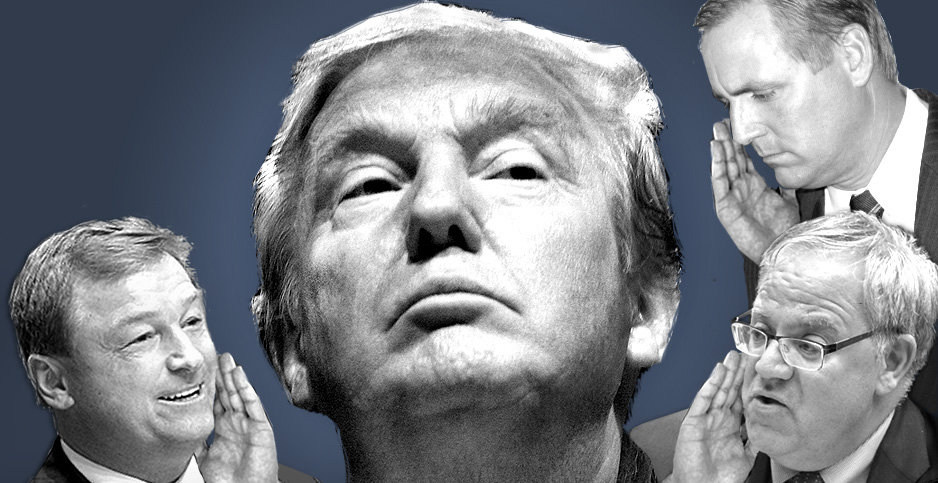 Campaigning to be President Trump’s Interior secretary is a little bit like Fight Club; the first rule is not to talk about it.

With Trump expected to name a replacement for outgoing Interior Secretary Ryan Zinke as early as this week — possibly even today — advocates are tactically mum about the behind-the-scenes maneuvering on behalf of potential candidates.

"Stealth is always preferred," one former Trump administration official, speaking on the condition of anonymity, said today. "News stories and PR campaigns don’t cut it with this administration."

One front-runner candidate, outgoing Republican Sen. Dean Heller of Nevada, has been conspicuously and perhaps not coincidentally low-key this week, avoiding the scrums of reporters wandering the Capitol.

In one-on-one meetings, though, potential candidates can present themselves for inspection. Last night, according to an informed source who spoke on the condition of anonymity, Trump met with Deputy Interior Secretary David Bernhardt.

Quietly, moreover, congressional colleagues and others who can potentially wield influence inside Trump’s often unpredictable White House have been making their cases as best they can. While personnel lobbying details are elusive, certain relationships provide hints (E&E Daily, Dec. 18).

Outgoing Rep. Jeff Denham (R) of California, for one, was a member of the same House freshman class as Mick Mulvaney, the former South Carolina congressman who’s been named Trump’s new acting chief of staff.

Denham is also close to current House Majority Leader Kevin McCarthy, a fellow representative from California’s San Joaquin Valley who is a dedicated Trump loyalist and whose leadership position amplifies any position he may convey.

"McCarthy is weighing in," the former Trump administration official said.

Heller, who like Denham was defeated in his re-election bid, has Capitol Hill allies of his own who can stress the lawmaker’s presumed confirmability in the Senate that he’s served in since 2011.

Another departing congressman, Idaho Republican Raúl Labrador, likewise has vocal allies in his corner from the House’s right wing, though his rivals can raise questions about how he’d fare in the Senate confirmation process. Behind closed doors, Cabinet secretary campaigns can be negative as well as positive.

"I’m waiting for the president to do that," she told reporters.

Potential candidates also know that lavishing praise on the president is almost part of the future Cabinet secretary’s job description. Though Trump has tapped for certain positions some individuals who once opposed him, a history of hosannas can help a candidate succeed.

"Now, Mr. President, you know a little bit about gold," Heller told Trump at an October campaign rally in Elko, Nev. "In fact, I think everything you touch turns to gold."

Zinke’s own nabbing of the Interior secretary’s position illuminated how connections can help as well as how mercurial Trump’s top-level personnel decisions can seem.

According to an article in GQ, the president’s son, Donald Trump Jr., made the compelling recommendation to tap his fellow hunting enthusiast Zinke for Interior.

Zinke’s wife, Lola, was also a member of the Trump transition team for the Department of Veterans Affairs after the election, and she accompanied her husband to a job interview in Trump Tower that left him uncertain about what position he might be offered (Greenwire, Oct. 20, 2017).

"I walked out in the hallway, and I said, ‘Well, Lola, what do you think?’" Zinke subsequently recounted to the Public Lands Council. "She says, ‘That meeting went great, but I think he was looking at you for Interior.’