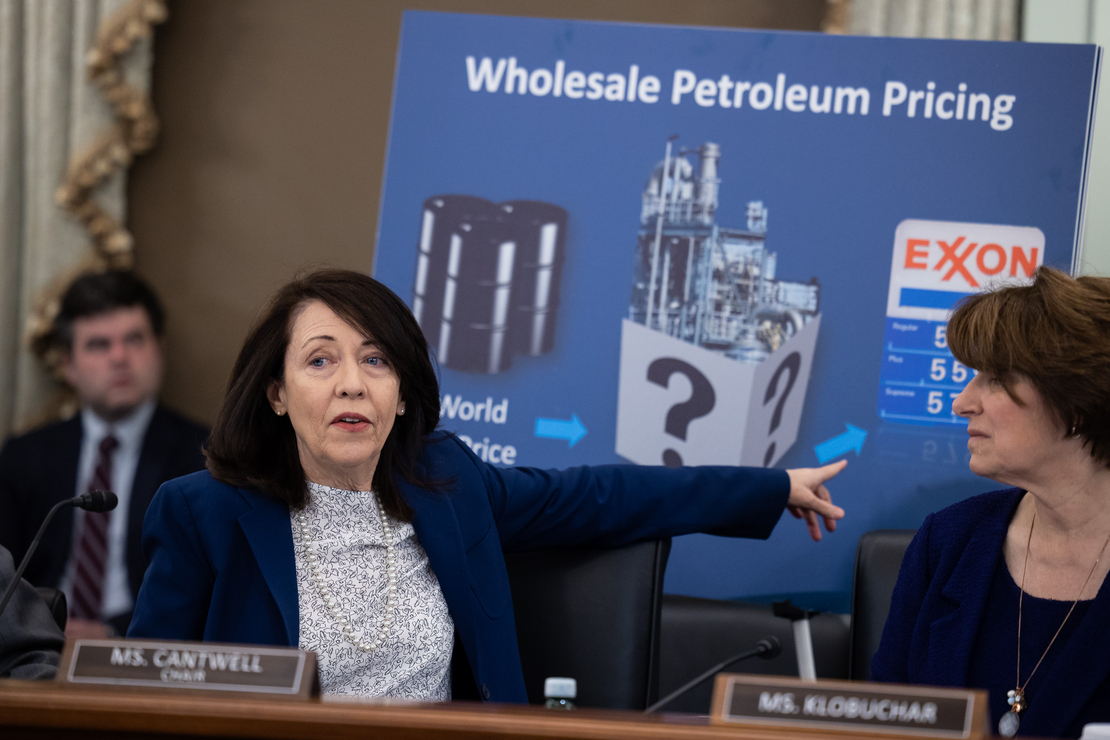 The congressional fight over high energy prices may give lawmakers an opening to introduce Enron-like transparency reforms into how the federal government monitors the trade of large transactions of petroleum products, according to a leading senator heading Democrats’ response to recent price spikes.

Senate Commerce, Science and Transportation Chair Maria Cantwell (D-Wash.) said yesterday during a hearing on alleged oil market manipulation that she is crafting legislation that would extend additional authorities to the Federal Trade Commission to enable stronger responses to potential market manipulation in the spot petroleum markets.

Such an effort would look to match similar authorities granted to the Federal Energy Regulatory Commission in the 2000s in the aftermath of the Enron scandal, which exposed accounting and market fraud in the electricity and natural gas markets. Those powers have resulted in over $1 billion in fines since they were put in place.

“Congress took action, and after that crisis in 2005, we empowered the FERC with the authority to make electricity and natural gas markets more transparent, and we continued to push that,” Cantwell said. “My opinion is we now need to do the same thing on opaque petroleum markets.”

Congress did give the FTC some oversight responsibilities as part of an energy bill that passed in 2007, although the spot market for petroleum products has not seen the same rigorous enforcement as the natural gas and electricity markets. Future markets for oil has transparency through the Commodity Futures Trading Commission.

“There is, however, one gaping hole,” said Robert McCullough, a principal with McCullough Research, who helped uncover the Enron scandal. “That gaping hole is spot oil, spot gasoline, those do not have a clear assignment.”

Alleged price gouging by major oil companies in response to the Russian invasion of Ukraine has emerged as a popular refrain from Democrats and the Biden administration as they look for policy solutions to relieve gas prices that have risen to price levels not seen in over a decade (E&E Daily, April 4).

The accusations stem, the lawmakers said, from the slow price response for gasoline prices to match declining global crude oil markets, even though prices rose rapidly in response to price spikes last month.

Known as the “rocket and feather” phenomenon, the concept has angered Democrats for exposing consumers to extended high prices, even as the White House readies actions to lower prices.

California and Western markets have felt the phenomenon more bluntly this past month, Cantwell alleged, as prices hover around about $5 despite global oil prices falling by 11 percent compared to their highs in the immediate aftermath of the Ukraine crisis.

Cantwell joined with Sen. Dianne Feinstein (D-Calif.) and Finance Chair Ron Wyden (D-Ore.) to urge the FTC to launch an investigation into “trading practices involved in setting benchmark indices and any role those practices may have or had in artificially elevating wholesale petroleum prices,” according to a letter sent by the trio yesterday.

Information that could close that gap and provide better understanding of why that phenomenon exists is not easily accessible for the federal government. For the FTC to gather the data, it would require an investigation and manpower to comb through millions of pages of transactions.

Cantwell said the goal of the legislation would be to give the FTC more authority and “access to data so that we can properly police these markets.”

“When it comes to these issues, you’re going to have 100 different opinions,” Cantwell told E&E News after the hearing. “I’m pretty sure that most people can get behind the transparency issue, because who doesn’t want to make sure that traders aren’t doing malicious things?”

“I think its the policies that are discouraging production,” said Kathleen Sgamma, president of the Western Energy Alliance. “The FTC has looked at price gouging and price manipulation 50 different times in recent years, and each time, they have found no evidence that the oil and gas industry was manipulating or price gouging.”

While Cantwell seeks to build support for her effort, lawmakers like Budget Chair Bernie Sanders (I-Vt.) attempted to build momentum for their proposal to introduce a windfall tax on companies seeing record profits as a result of the aftereffects of the Covid-19 pandemic and the Russian invasion of Ukraine.

“During this terrible pandemic, which has caused so much pain and so much economic instability, during [Russian President Vladimir] Putin’s murderous invasion of Ukraine, it is at this moment not acceptable to me for corporate America to make huge profits by ripping off Americans at the gas station, the grocery store or any other sector of economy,” Sanders said.

Sanders introduced legislation, S. 3802, with other progressive lawmakers that would offer consumers a quarterly rebate out of the revenue raised from the windfall profits of major oil companies that produce or import at least 300,000 barrels of oil per day (E&E Daily, March 31).

The idea earned the endorsement of the Center for American Progress as well as 126 climate, faith, consumer Advocacy and progressive organizations.

“The industry should feel America’s pain at the pump as a motivation to lower costs — not an invitation to increase profits,” CAP said.

Republicans, however, have opposed any such effort.

Sen. Chuck Grassley (R-Iowa) cited his experience with price control debates of the 1970s as evidence of the long-standing issues the lawmakers have had with the idea.

“Anyone who lived through that time can tell you that these policies made things worse by reducing supply,” he said at the Budget Committee hearing. “The result was rampant shortages, most notably gas lines around the block. Let’s not repeat the mistakes of the past.”

The windfall tax is among a series of prescriptions under consideration in the House, where a floor vote is more likely than in the Senate.

House Majority Leader Steny Hoyer (D-Md.) said leaders will use the Energy and Commerce hearing today to begin weighing what legislation they might propose to help bring down gas prices.

“We are working on it; we want to come up with something that is effective,” said Hoyer, who noted that passing a “use it or lose it” law for federal energy leases is likely a better option than a federal gas tax holiday that might not be passed on to consumers.

Hoyer, who did not specify a time frame for a bill, also said he would like oil companies to “voluntarily” come up with ways to reduce gas prices and increase supply. He added that the long-term solution is to “very, very, very substantially” reduce the nation’s reliance on fossil fuels.

Oil and gas advocates at the roundtable event on the current state of American energy said building out domestic infrastructure like pipelines and gas export facilities is critical to boosting production in the short and long term. Pipeline cancellations over the last decade haven’t helped that effort, they argued.

Republicans on the committee also blamed Biden for implementing environmental permitting and regulation hurdles that have killed domestic fossil fuel projects. Ranking member Sam Graves (R-Mo.) accused the Biden administration of overenforcing the National Environmental Policy Act to prevent energy projects from getting off the ground.

“Under Biden energy infrastructure projects have faced ongoing permitting roadblocks through abuses of environmental laws and efforts to throw out streamlining and efficiencies,” said Graves. “The administration is realizing the real-world impacts of these policies.”