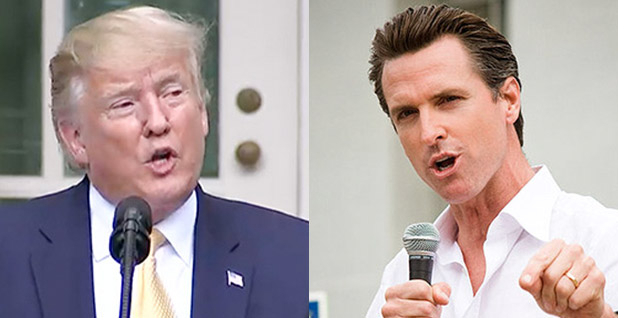 The Trump administration has sued California in an attempt to strip the Golden State of its cap-and-trade deal with Quebec. California Gov. Gavin Newsom (D) is pictured at right. C-SPAN (Trump); Charlie Nguyen/Flickr

As courts weigh the constitutionality of California’s deal with Quebec to create a cross-border market for greenhouse gas emissions, legal experts say the litigation may prevent other leaders from brokering similar agreements.

"In the short term, there may well be a chilling effect," said University of Calgary law professor David Wright.

But because there’s a dearth of case law on what constitutes an illegal cross-border treaty, Wright said DOJ’s case against California may provide some clarity from the courts.

"In just a couple years’ time — or hopefully less when we have certainty from the U.S. courts on this — those states and provinces will know, ‘OK, we could safely proceed with this linkage,’" he said.

Or, he added, they will know they need to take a different course of action.

California officials argued that the agreement does not constitute a protected treaty.

Part of DOJ’s argument rests on the Constitution’s treaty clause, which says that states may not threaten national sovereignty by entering formal, binding compacts with foreign bodies, and the compact clause, which requires congressional approval of alliances with foreign states.

A court could find that California’s deal with Quebec isn’t necessarily binding.

Originally designed to encompass several parts of Canada, the United States and Mexico, the deal between California and Quebec offers an avenue for linking carbon markets together at the local level in the absence of broader international action.

Though there is language in the pact that says parties "shall" meet certain obligations like giving notice of changes, legal experts say there do not appear to be repercussions for doing the opposite — as Ontario did when it dropped out of the agreement with no warning in 2018.

Cap-and-trade programs, like California’s and Quebec’s, build a market in which participants can buy and sell allowances to emit greenhouse gases. Regulated companies may also use offsets to meet their commitments instead of buying allowances or cutting on-site emissions.

Participating entities can buy or sell their offsets and allowances through government auctions or private sales, creating a market price for carbon that incentivizes emissions reductions.

Quebec and California allowed regulated companies within their own cap-and-trade programs to trade their allowances with each other under their deal.

"These agreements between the governments are documents that essentially set out a process and a set of promises to cooperate and keep one another informed," said Danny Cullenward, an energy economist and lawyer who teaches at Stanford Law School and who helped shape the California and Quebec program.

"There’s nothing legally binding about them," he continued. "They’re just sort of a promise that people make to one another to cooperate, and that’s largely it."

Southern Methodist University law professor James Coleman said during a recent teleforum that the deal between California and Quebec could arguably be "more binding than the average treaty" due to the financial stakes of the agreement.

"I think on the assumption that this state and this province want to keep some carbon regulation, it is the case that there’s a financial incentive to stay in this agreement," he said.

"I think that is part of the reason that the government thinks this counts as an important and binding compact that gives California powers to influence Quebec’s behavior in ways that it would not otherwise have," Coleman said.

The Trump administration’s legal challenge came as a shock to some legal experts.

"Honestly this lawsuit surprised me because, in many ways, what California has engaged in is an example of states’ rights and a market-based system," said Sharmila Murthy, law professor at Boston’s Suffolk University.

Those are "both things that I would think that the administration’s base would support," she said.

Although California and Quebec have struck an unusual cap-and-trade deal, the agreement is not the only cooperative effort between states and foreign entities, Murthy noted in recent research.

One such cross-border agreement between New York and Quebec allows the state and province to legally accept each other’s driver’s licenses. In 2005, eight states and two provinces entered — without congressional approval — the Great Lakes-St. Lawrence River Basin Sustainable Water Resources Agreement, a deal to manage water bodies sandwiched between the United States and Canada.

Murthy said the case law is sparse on whether those agreements are constitutional. The last comparable legal fight over the compact clause took place before the Civil War, she said.

In the 1840 case Holmes v. Jennison, which involved the deportation of a U.S. citizen for murder in what is now Quebec, the Supreme Court struck down the extradition agreement but could not decide which part of the Constitution — the treaty or compact clause — the deal actually violated.

"The issue is that the Supreme Court has never before really considered this question in light of the modern functional compact clause test," Murthy said. "These are really going to be questions of first impression that are likely going to go all the way up to the Supreme Court."

If the case makes its way to the justices, they would have to be careful about the ramifications of their ruling, she wrote in a recent analysis for Harvard University’s Environmental & Energy Law Program.

"Because Congress has not even created a reporting mechanism for keeping track of subnational cross-border agreements," Murthy wrote, "the exact scope of this impact is unknown."

Regardless of the outcome of DOJ’s battle against California, legal certainty will inject confidence into the market, said Wright of the University of Calgary.

"Right now, everybody’s been operating in this realm of uncertainty, and that has a market effect," he said.

Carbon credits in the California and Quebec program, Wright added, "might actually be a bit discounted right now because actors in that marketplace are wary that the whole thing could get wiped out on account of constitutional constraints."

Cullenward said he expects that even if courts rule against the agreement, the case would not have a major impact on the individual cap-and-trade markets in California and Quebec. He noted that the individual programs can stand on their own — even in the absence of an agreement linking the markets.

"Setting aside the disruption and the uncertainty and the political vindictiveness of this lawsuit, there’s not a lot about the markets that doesn’t work in isolation if each of them were operating on their own," he said.