Cap and trade gets a big win in Pennsylvania. Will it last? 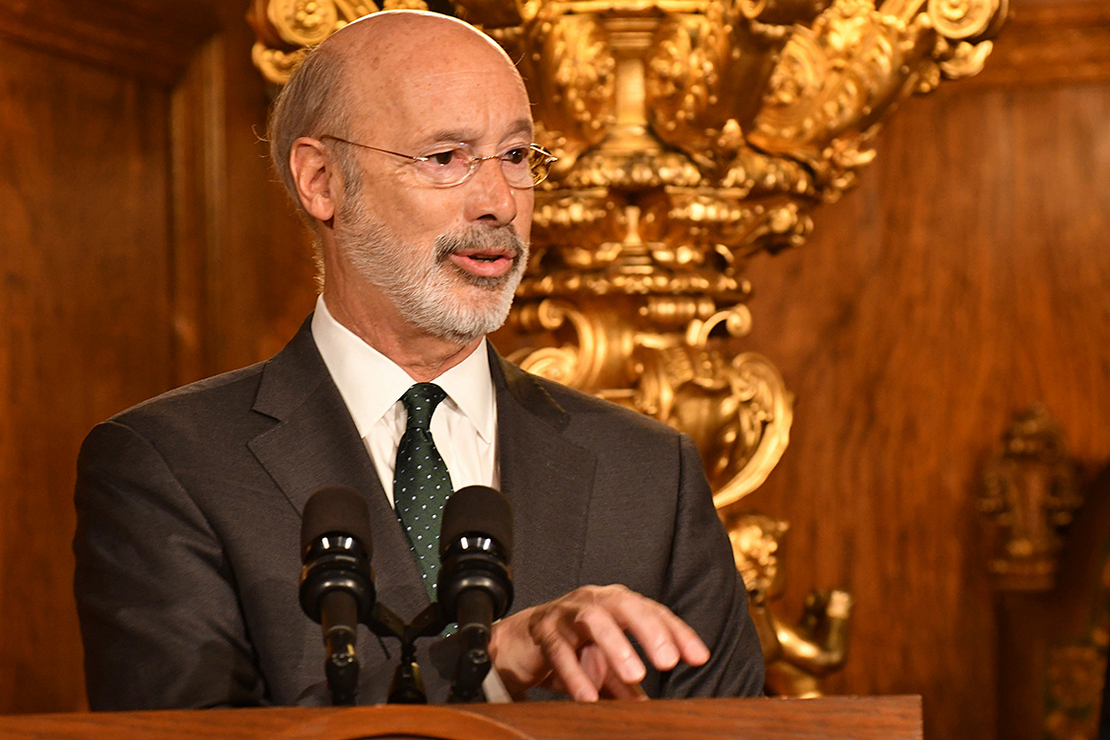 Pennsylvania Gov. Tom Wolf (D) speaks to reporters during a 2019 news conference on his signing an executive order for his administration to start working on regulations to bring Pennsylvania into a multistate consortium that sets a price and limits on greenhouse gas emissions from power plants. AP Photo/Marc Levy

The Northeast’s cap-and-trade program has installed its keystone. Now, the question is how long it will stay in place.

The move represents a massive expansion of carbon pricing in America — capping power plant emissions in one of the country’s leading electricity-generating states. But the Keystone State’s participation in the program faces immediate tests in the form of a lawsuit and a gubernatorial contest this fall.

Wolf, who has pushed a regulatory rule to join RGGI over fierce Republican objections, is term-limited and set to depart Harrisburg next year. Attorney General Josh Shapiro, the Democrat running to replace him, has expressed skepticism about the program. Republicans are staunchly opposed to it.

The coming election — and whether Pennsylvania’s participation in RGGI survives it — will serve as a political litmus test for carbon pricing programs in the United States, said Barry Rabe, a professor who studies state climate action at the University of Michigan.

“It is a really significant expansion and one that the RGGI states have been pulling for for a long time,” he said. But he added, “This could have the weakest footing of any of the now 12 states that have joined RGGI. … Pennsylvania-style RGGI is largely the work of a term-limited governor who can’t choose his successor and doesn’t have a basis of support currently in the Legislature.”

Pennsylvania’s entry into RGGI represents a dramatic victory for carbon pricing in the United States at a time when the idea of capping emissions has lost its allure among many Democrats and environmentalists.

A pair of unsuccessful ballot initiatives in Washington state seeking to implement a carbon tax in recent years zapped much of the political momentum for pricing carbon. Congressional Democrats have not made a serious effort to include either cap and trade or a carbon tax in their climate plans despite boasting narrow majorities in Washington, D.C.

Yet RGGI has continued to expand in recent years, reintroducing New Jersey to its ranks and adding Virginia to the program. Virginia Gov. Glenn Youngkin, a Republican, has pledged to withdraw Virginia from RGGI but has been unable to overcome opposition from Senate Democrats in Richmond.

Pennsylvania’s membership would be the biggest addition yet to the program, said Karen Palmer, a senior fellow at Resources for the Future.

“I do think it is a terrific development because I think the states are really the ones moving forward on actually addressing carbon, as opposed to incentives to clean electricity, which is where Congress is headed,” Palmer said. “This is putting a price on carbon in an important part of the economy and, as people move to electrify, it could be even more important.”

Pennsylvania is one of the country’s largest power producers. In 2020, its power plants generated 460 terawatt-hours of electricity, ranking it third among states, according to the U.S. Energy Information Administration.

“By joining RGGI, Pennsylvania can substantially strengthen the effectiveness of the program,” said Brian Murray, a research professor at Duke University’s Nicholas School of the Environment and Sanford School of Public Policy.

“Research has shown that RGGI has been effective at reducing emissions within its borders, but some of this has come at the expense of shifting emissions to states outside of RGGI, like Pennsylvania, who are connected to the same grid,” Murray added. “With Pennsylvania now in RGGI, that will take away this opportunity for emissions leakage as Pennsylvania plants will also be subject to an emissions cap and will have to account for every ton emitted.”

Under the RGGI regulation finalized by the Department of Environmental Protection, Pennsylvania’s power-sector emissions would fall from 78 million tons this year to 58 million tons in 2030. State officials said power plants could join the program as soon as July.

Environmentalists say the program can serve as a foundation for deeper emission reductions, as revenues from RGGI’s auctions can go toward energy efficiency, clean energy and assistance for coal-reliant communities.

“RGGI by itself is not a place to stop; it is a place to start,” said Mark Szybist, a lawyer at the Natural Resources Defense Council, which has championed Pennsylvania’s RGGI membership.

“It is what we can do today in a Legislature that has not shown any real interest in passing good clean energy legislation,” Szybist added. “It is the kind of policy that could become a springboard especially if we’re getting auction proceeds coming in, and the state is using those to jump-start clean energy industries and making clean energy more of a reality than it is right now.”

A coalition of Republican lawmakers, coal and gas interests, and unions have fought Pennsylvania’s embrace of cap and trade. They have blasted the program as a boondoggle that would add to consumers’ electric bills and jeopardize the reliability of the grid — all while failing to reduce emissions.

“Joining RGGI is a bad idea because it will increase electricity prices, even though higher energy prices are already contributing to inflation,” said Michelle Bloodworth, the president of America’s Power, a trade group representing coal interests. “It will cause the premature retirement of coal-fired power plants at the same time electricity grid operators are concerned that more coal retirements could cause electric reliability problems; and it will have no effect on climate change because other countries, especially China, continue to build more coal-fired power plants and increase their use of coal.”

Republican lawmakers filed a lawsuit seeking to prevent the Wolf administration from publishing the RGGI regulation. They also have proposed bills that would block the state from participating in the program. Those measures are unlikely to pass unless they succeed in attracting Democratic votes to override a veto from Wolf.

But the bigger question is what will happen this fall. Fifteen Republicans are running in the gubernatorial primary, and they have lambasted the program on the campaign trail.

His office later cleared the RGGI rule to be published but characterized the move as an administrative matter. Will Simons, a spokesman for the Shapiro campaign, said the attorney general’s opinion of RGGI had not changed.