Cap and trade is alive, and it might grow under Trump 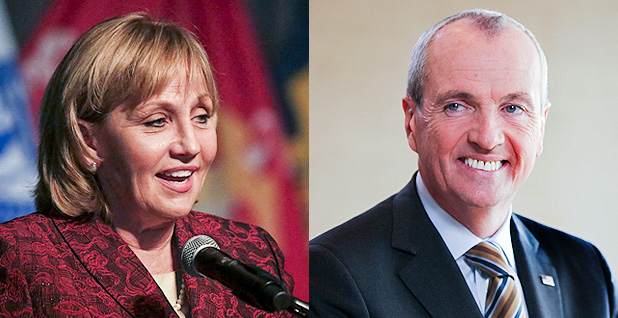 The Regional Greenhouse Gas Initiative once labored in the shadows of President Obama’s Clean Power Plan. No longer. President Trump’s dismantling of climate initiatives has pushed America’s only multistate cap-and-trade program to the fore of U.S. carbon-cutting efforts.

RGGI, as the compact of nine Northeastern states is known, can already claim several impressive achievements. Emissions are down 37 percent since 2008 across the region. And electricity costs have fallen 3.4 percent over that time (Climatewire, Nov. 28, 2016). While the cheap cost of natural gas is responsible for much of that decline, RGGI advocates can argue that the program hasn’t sent electric bills soaring as many once feared.

The program’s participants, which include five Republican-led states, are now in talks over how to cut more carbon. They are expected to release a plan for reducing the region’s carbon cap later this year (Climatewire, June 28).

But if RGGI’s influence is to expand in the age of Trump, the program must grow, supporters say. That might happen soon. New Jersey and Virginia look increasingly likely to link up with the program.

In Virginia, Lt. Gov. Ralph Northam (D) is running with a lead in polls such as the Washington Post-Schar School Virginia poll, and he has pledged to uphold an executive order by Gov. Terry McAuliffe (D) to cap carbon emissions. McAuliffe’s directive doesn’t require joining RGGI, but it does instruct state regulators to examine partnerships with existing carbon trading programs (Climatewire, May 17).

"RGGI is an established and successful trading system," said Mike Dowd, director of the Virginia Department of Environmental Quality’s Air Division. "Really, it’s the only game in town."

At the same time, emissions reductions in New Jersey (down 3 percent between 2008 and 2015) and Virginia (down 16 percent) have lagged behind RGGI’s cut of 37 percent, according to the Natural Resources Defense Council’s analysis of federal figures.

Adding the two states would carry symbolic significance, as well. Christie pulled the Garden State out of the program in 2011 over concerns about its costs. Virginia would be RGGI’s first Southern state, and the first with a regulated power market. Moving south would show that RGGI is capable of thriving outside its cozy Northeastern home.

"From RGGI’s inception, it has always been a demonstration project in cutting your emissions while growing your economy," said Jackson Morris, eastern energy project director for NRDC. Expanding RGGI, he added, "will help with broader momentum against the backdrop of the ‘Trumpocalypse.’"

To be sure, expansion efforts remain in their infancy. Dowd, Virginia’s air division director, and several staffers attended the most recent meeting of RGGI participants in New York, where they held discussions with program officials on the meeting’s side. He nonetheless cautioned that talks over how to reduce Virginia’s emissions remain preliminary.

RGGI expansion is at the core of Maryland’s emissions reduction strategy under Gov. Larry Hogan (R), said state Secretary of the Environment Ben Grumbles. His department has been sharing information with his counterparts in states interested in joining.

Of the two candidates, New Jersey has the clearest path to membership. Phil Murphy, a Democrat with a large lead in a recent Quinnipiac University poll, has promised to immediately restore the Garden State to RGGI’s ranks. His opponent, Republican Lt. Gov. Kim Guadagno, has also pledged to rejoin the program.

Some tweaks will be needed for New Jersey to rejoin. The bills sent to Christie were similar to the original legislation authorizing the program. Those measures will need to be updated to reflect RGGI’s falling cap and to redirect money to energy efficiency and renewable programs, advocates said.

"Now is the time for us to catch up," said Environment New Jersey Director Doug O’Malley, noting that the state has seen an uptick in emissions in recent years as more natural gas plants have come online. "RGGI is not the only strategy, but it is certainly a component and one we can make an impact with on day one."

Virginia’s case is more complicated. McAuliffe’s order calls on regulators to present a plan for slashing emissions by December, but fulfilling that plan will fall to the next governor. While Northam is the front-runner in the race to succeed McAuliffe, a win for Republican Ed Gillespie would all but kill any attempts to join the program.

Even if Northam wins, full-fledged RGGI membership still seems like a long shot. Appropriating revenue from RGGI’s auctions would require legislative approval, something Republicans who control both chambers of the General Assembly in Richmond are unlikely to grant. They have killed several attempts to join the program in recent years. Republicans have also questioned the legality of McAuliffe’s move, absent approval from the Legislature.

RGGI would need to tweak its system to work with Virginia as a result. RGGI holds a series of regular auctions where power companies can buy and sell allowances. Since regulators in RGGI states don’t have jurisdiction over power generators, the program’s planners set up a system where proceeds from its auctions are sent back to the states for energy efficiency measures and similar initiatives. The idea is to ensure that the public benefits from cap-and-trade auctions, instead of letting power generators pad their bottom line.

Virginia regulators, by contrast, do have control over power companies. One idea that’s gaining traction would work like this: The commonwealth’s system could be set up to give utilities like Dominion Energy a certain number of allowances, advocates say. State regulators would then direct the power company to use the money from its allowances on energy efficiency and other environmentally friendly measures, they say.

"Virginia has done a lot of what needs to be done to prove we belong in RGGI," said William Shobe, a professor of environmental economics at the University of Virginia. "It’s much easier to see a path to find a way for RGGI and Virginia to link."