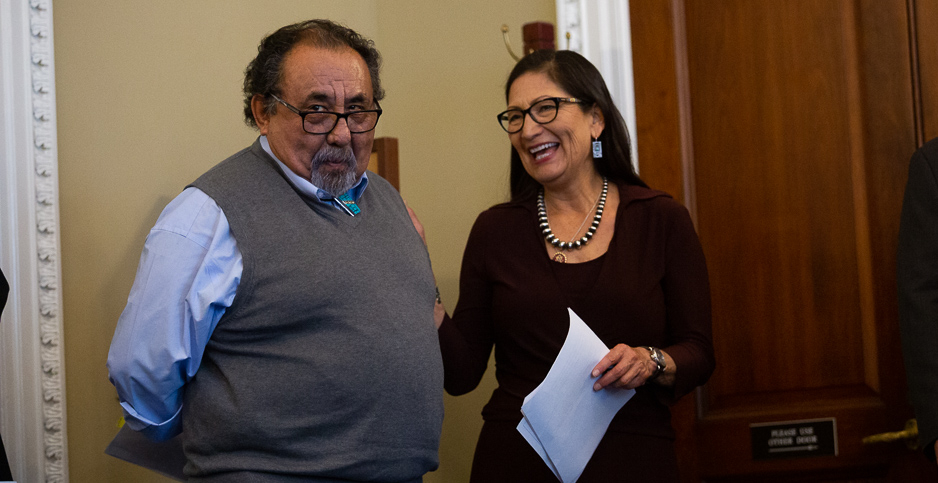 Recipients of these calls, Grijalva told E&E News in an interview yesterday, include those "real close" to President-elect Joe Biden’s transition team.

"I’m letting them know how I feel about Deb and asking them to support her," he added.

He was the first congressman to publicly speak out in support of Haaland for the top agency position earlier this week in a letter to members of the Congressional Hispanic Caucus, which had initially put forward Grijalva’s name as its pick for the posting.

"There were members who called me afterward and said, ‘How can we help?’" Grijalva said.

"There’s clearly a groundswell of support for Rep. Haaland to lead the U.S. Department of the Interior, which is a reflection of her ability to build broad coalitions," Castro later said in a statement to E&E News. "[She] would make an excellent Secretary of the Interior."

Rep. Jared Huffman (D-Calif.) said he’s a co-signer. "I’m happy to vouch for her as a great candidate for that position," he said.

Young’s office did not respond to requests from E&E News for a copy of that statement.

Grijalva appeared to grow emotional as he described what Haaland’s appointment would mean for him and so many others.

"There’s a very important part of me that identifies with the Indigenous, because of who I am and how I came to be. That’s part of my background, and at least for Mexican Americans, that is part of our legacy as well, culturally and ethnically," he said.

But, the chairman added, she’s not "window dressing." He noted that when he makes his pitch for Haaland, he leads with substance, not emotions, and underscores how she will come to the job knowing where Democrats need to start in righting Republicans’ wrongs.

"She has had a bird’s-eye view of the last four years of Interior and what we’ve had to fight back against … and she has a perspective inside this agency under Trump and what they’ve done and what they’ve undone.

"When you are in the middle of the battle, you pay attention to a lot of details," he continued. "Bringing it back to that perspective of knowing what needs to be repaired and knowing the types of people you need to surround yourself with, knowing the importance of climate change and the role Interior plays in that. … It’s going to be a very pivotal position, and I think she’s prepared to do it."

"In the last four years, we have seen the dangers of leadership by those who do not meet these qualifications. … The importance of this cabinet position to Indian Country cannot be overstated."

‘No way of knowing’

"I think Tom Udall is formidable, Heinrich is formidable," Grijalva said. "I’m not belittling their candidacies by any means, but I have chosen to support Deb in whatever effort I can. I also think with the Natural Resources Committee going forward, an ally at Interior gives us a huge opportunity to be of great benefit to the Biden-Harris administration."

Yet neither Udall nor Heinrich has had, or is currently enjoying, the kind of vocal and effusive support of fellow congressional colleagues who are eager to see Haaland make history. The forthcoming letter from Haaland’s peers could further cement that eagerness.