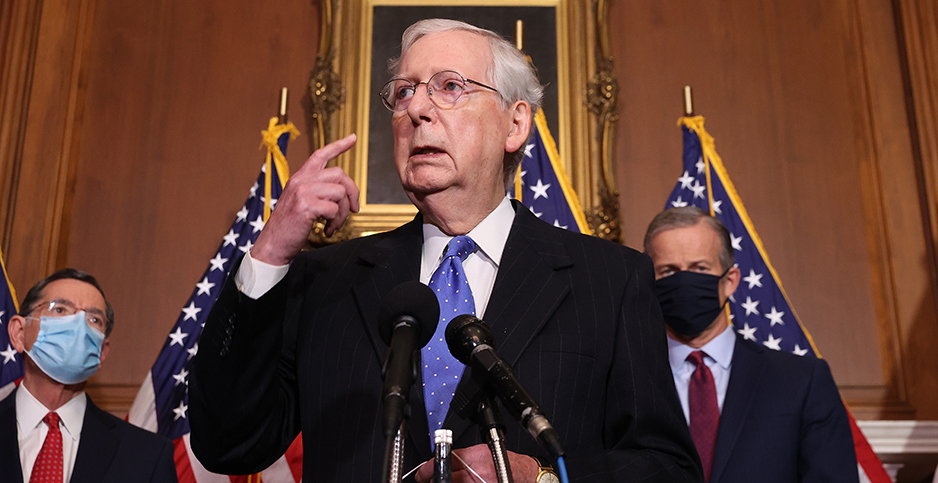 After months of deadlock, congressional leaders and the Trump administration are renewing efforts to enact additional COVID-19 relief before the end of the year — and critical minerals provisions from the Senate Energy and Natural Resources Committee are once again in the mix.

Yesterday saw a flurry of new activity on pandemic assistance, with Democrats pitching a new proposal to Senate Majority Leader Mitch McConnell, the Kentucky Republican sending his own plan to GOP senators to peruse, and Treasury Secretary Steven Mnuchin speaking with House Speaker Nancy Pelosi (D-Calif.) by phone about relief for the first time since before the election.

Separately, a bipartisan group of House and Senate lawmakers threw their own framework totaling $908 billion into the legislative mix, while vowing that Congress shouldn’t close out the year without passing additional stimulus.

McConnell said yesterday that Pelosi and Senate Minority Leader Chuck Schumer (D-N.Y.) had sent him a letter outlining a new COVID-19 proposal, adding that he was in talks with Mnuchin and White House chief of staff Mark Meadows, "trying to ascertain what the president would actually sign into law."

McConnell also said the omnibus spending package under development would be the likely vehicle for any COVID-19 deal.

"Obviously … you’ll have to have Democratic votes to get through the House, but I think it’ll all likely come in one package," he said.

However, a draft of McConnell’s proposal obtained by a Washington Post reporter showed that it lacks a key element sought by Democrats: any funding for state and local governments. Furthermore, it would extend for only one month expanded unemployment insurance that lapses at the end of December.

Like an earlier Senate GOP proposal that was blocked by Democrats, the measure includes Senate Energy and Natural Resources Committee-drafted provisions to encourage the domestic production and supply of critical minerals (E&E Daily, July 28).

Sen. Ron Wyden (D-Ore.) slammed the McConnell proposal for including a tax break for expensing the full cost of business meals as well as corporate liability provisions that Democrats have criticized for months.

"There are upwards of 150,000 COVID cases per day and miles-long lines at food banks nationwide, and Leader McConnell wants to do tax breaks for three-martini lunches and broad legal immunity for his corporate donors," he said in a statement. "It’s insulting to the American people."

Schumer declined to discuss the proposal he and Pelosi sent to McConnell, but expressed concern that the majority leader would once again write his own relief bill.

"Let me just say, I hope McConnell will start doing things in a bipartisan way," he told reporters. "Every time he’s tried to do it in a partisan way, it has failed."

In a statement following her phone call with Mnuchin, Pelosi said the pair discussed recent developments on a coronavirus vaccine and the need for significant funds to distribute it.

"Any COVID proposal must ensure that the vaccine is free and accessible to everyone," she said, adding that Mnuchin said he would review the proposal Democrats sent to McConnell, as well as the bipartisan proposal floated by senators and House members earlier in the day.

"Additional COVID relief is long overdue and must be passed in this lame duck session," the speaker said.

Also absent from the new McConnell proposal is any funding for transit — which would see $15 billion in the $908 billion bipartisan proposal that emerged yesterday (Greenwire, Dec. 1).

That framework also includes $17 billion in additional assistance for airlines, $4 billion for airports and $1 billion for Amtrak.

Transit agencies in particular have seen ridership and revenue plummet during the pandemic, as people have been avoiding buses and subways for fear of contagion.

The Washington Metropolitan Area Transit Authority on Monday announced some of the steepest budget cuts in its 50-year history, including the closure of 19 stations and the elimination of weekend service.

Advocacy groups are seeking $32 billion in emergency relief for transit — more than double the $15 billion in the proposed package.

"It’s critical that we include substantial resources for public transit in the next COVID relief package, and that we have to pass as soon as possible," Gillibrand said at a virtual event hosted by the Riders Alliance, a New York-based advocacy group.

"If we want to tackle global climate change in our lifetime, one of the best, most efficient and graceful ways to do so is to invest in mass transit … and to rely less on automobiles," she said.

The New York Democrat also noted that President-elect Joe Biden is a vocal fan of Amtrak, which he rode daily as a senator from Delaware.

"He loves Amtrak; he loves riding trains," she said. "So we have a champion in the White House."

In remarks delivered while introducing his economic team, Biden yesterday called on Congress to pass "a robust package of relief" to address economic and public health fallout from the pandemic while signaling he’ll push for a major recovery package after he takes office in January.

"[A]ny package passed in the lame-duck session is likely to be — at best — just the start," Biden said. "My transition team is already working on what I will put forward for the next Congress to address the multiple crises we are facing — especially our economic and COVID crises."