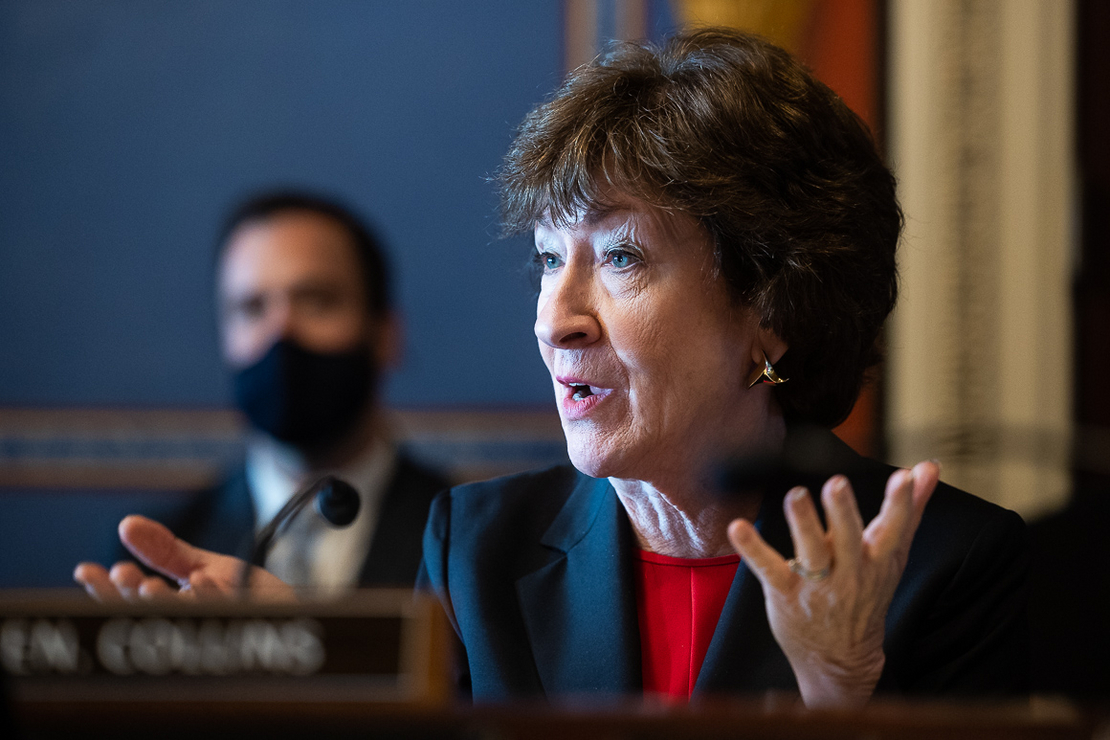 Sen. Susan Collins (R-Maine) has long been a champion of declaring biomass to be carbon neutral. Francis Chung/E&E News

A perennial battle in Congress over the environmental effects of burning wood for energy has tipped again toward the biomass industry.

The $1.7 trillion omnibus spending bill declares forest bioenergy carbon neutral and instructs federal agencies to adopt policies supporting that assumption, discarding efforts in both the House and Senate to avoid the terminology.

The bill, poised to pass by Friday, calls on agencies to “establish clear and simple policies” for forest biomass as an energy source, including policies that “reflect the carbon neutrality of forest bioenergy and recognize biomass as a renewable energy source.”

Industry groups say turning woody biomass into energy — such as by burning wood pellets — doesn’t add to net carbon emissions as long as forests aren’t converted to nonforest uses in the process. The bill language, which has appeared annually for several years, reflects that position.

In recent years, some lawmakers have tried to push back against the assertion and to tweak the language, directing agencies to consider “the carbon benefits” of forest biomass as a renewable energy source. That proposed change appeared in both the House and Senate versions of the Interior-EPA spending bill going into negotiations on the omnibus.

Scientists say the research on forest biomass defies simple declarations about what the carbon benefits are. Variables include how quickly forests grow back and how much carbon emissions occur in the harvesting, transporting and ultimately burning of wood for energy.

EPA has stepped back from declarations during the Trump administration that forest biomass is carbon neutral, and the U.S. Energy Information Administration struck a nuanced position in its monthly energy review in November. The Intergovernmental Panel on Climate Change excludes carbon released from the burning of biomass from its energy-related emissions reporting, the EIA said.

While the release of carbon from burning woody biomass is assumed to be offset by carbon uptake during trees’ growth, the EIA said, “This is not to say that biomass energy is carbon‐neutral. Energy inputs are required in order to grow, fertilize, and harvest the feedstock and to produce and process the biomass into fuels.”

Critics of the wood-to-energy industry said they were disappointed by the provision’s inclusion in the omnibus, which covers all federal agencies for the fiscal year that started Oct. 1. They attributed its endurance to Maine’s senior senator, Republican Susan Collins, an appropriator whose state is a timber industry leader.

A spokesperson for Collins, Christopher Knight, told E&E News that Maine and other states rely on biomass to meet their renewable energy goals.

“Recognizing the carbon neutrality of biomass not only aligns with the science, but also encourages investments in working forests, harvesting operations, bioenergy, wood products, and paper manufacturing,” Knight said.

“With the balance of power so slim in the Senate, Republicans like Susan Collins can easily swing this sort of deal,” said Laura Haight, U.S. policy director at the Partnership for Policy Integrity, a nonprofit energy and environment advocacy organization that’s lobbied against biomass energy. “We can only hope the EPA sticks to the science of biomass, not the politics.”

The PPI and other groups wrote lawmakers earlier in December, urging against the biomass rider’s inclusion.

The Southeast tops the U.S. wood pellet industry and ships the product to Europe, where governments view wood-to-energy positively compared to fossil fuels. The biggest company in the industry, Enviva, has lobbied for favorable policies, citing how carbon accounting reflects benefits.

Harvest occurs on about 2 percent of Southeast forests annually, allowing the other 98 percent to keep growing and absorbing carbon, Enviva said. The company, based in Bethesda, Md., said Forest Service inventories suggest the amount of captured carbon is increasing every year in Southeast forests.

Even accounting for emissions from smokestack and supply chains, wood pellets compare favorably to coal, Enviva said on its website, referencing a 2015 study published in Environmental Research Letters.

“When all of these supply chain emissions are accounted for and compared to the stack emissions from fossil fuels like coal, we find that our wood pellets can reduce greenhouse gas emissions by up to 85 percent compared to coal,” the company said.