Carbon pricing back in the mix for reconciliation 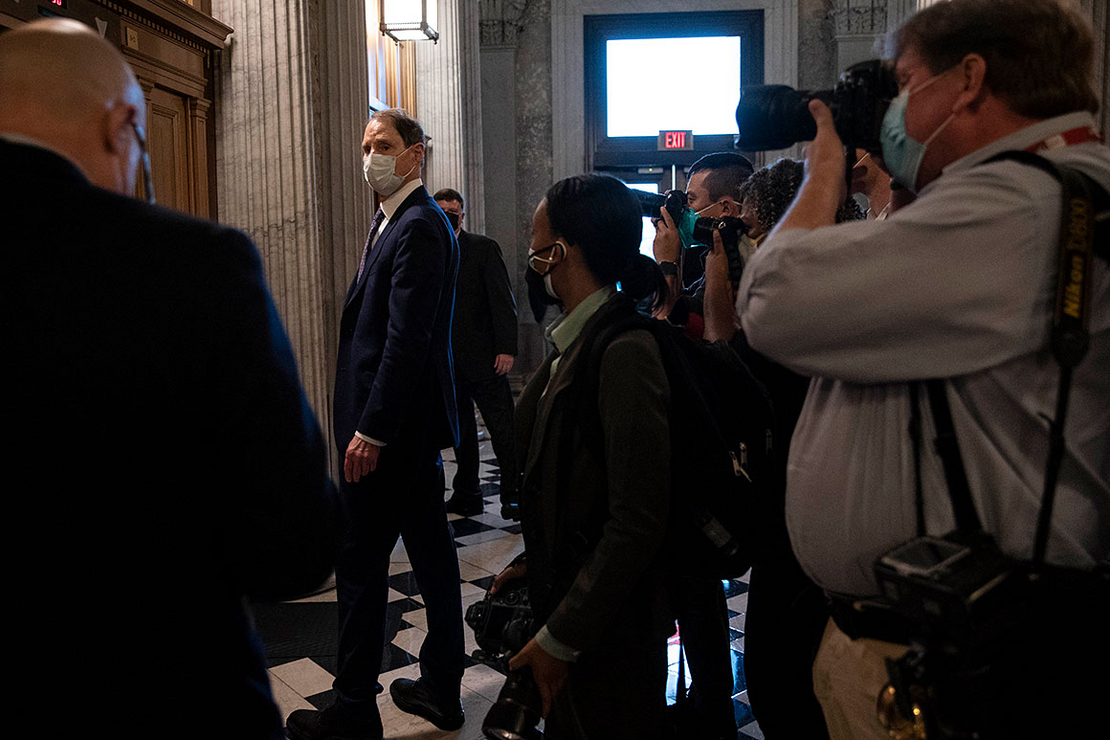 Senate Democrats are considering a carbon pricing proposal for the $3.5 trillion reconciliation bill, according to a document obtained by E&E News, bringing the policy back into the mix despite potential opposition from progressives and the White House.

It’s one of several pay-fors that Senate Finance Chair Ron Wyden (D-Ore.) is working on as part of the effort to fully offset the massive spending package, according to a presentation given to Senate Democrats during their weekly caucus lunch Tuesday.

Wyden, who spoke at multiple events with interest groups yesterday, said that Sen. Sheldon Whitehouse (D-R.I.) is “working very closely with me on the pricing issue.”

“If you’re really going to change behavior and combat this climate crisis — and my God, last few weeks have shown why this is urgent — you’ve really got to start with taxes and prices,” Wyden said during an event with the business group Environmental Entrepreneurs, or E2. “That’s how you drive changes in behavior.”

It’s the latest sign that a carbon tax or fee could be in the mix for reconciliation, in addition to the Clean Electricity Performance Program, or CEPP, and a suite of other climate policies.

A separate Finance Committee document circulating around Capitol Hill last month included a broad proposal for a carbon tax starting at $15 per ton, paired with rebates for low-income taxpayers, as a potential way to finance the package. Whitehouse, a longtime carbon pricing supporter, and other Senate Democrats, have also said for weeks that the idea is still in play (E&E Daily, Aug. 10).

Once the catch-all policy proposal for any climate advocate, carbon pricing had fallen from the political picture since the 2020 election, amid mixed signals from Democratic politicians and progressive concerns that it would disproportionately affect low-income families.

Presidential climate envoy John Kerry said earlier this year that he believes President Biden supports carbon pricing and that “one of the most effective ways to reduce emissions is putting a price on carbon” (Climatewire, April 9).

But the White House opposed a similar gas tax hike during talks on the bipartisan infrastructure bill and appeared to rule carbon pricing out with Biden’s pledge not to raise taxes on anyone making less than $400,000 a year.

The House Ways and Means Committee, meanwhile, is not considering the idea as part of its package for reconciliation. And when Senate Majority Leader Chuck Schumer (D-N.Y.) circulated a memo showing the reconciliation bill could reduce emissions 45 percent by 2030, it did not include carbon pricing, instead relying primarily on tax incentives and the CEPP (Greenwire, Aug. 25).

Still, during a separate event sponsored by Evergreen Action yesterday, Wyden reiterated that in addition to the sweeping clean energy tax overhaul his panel advanced earlier this year as a marker for reconciliation, he’s also working on carbon pricing legislation.

“I think if you’re going to change behavior, which is right at the heart of climate change, reform, those are the two areas,” he said. “You’ve got to go in both those lanes.”

Wyden pointed to the failed carbon pricing efforts in Washington state under Gov. Jay Inslee (D) in recent years as a warning about how to craft a price on carbon so that it mollifies progressive concerns about environmental justice.

“People still were left with fear that in the transition they would face higher bills that they couldn’t pay,” Wyden said during the E2 event. “So it’s going to be very hard, very important to make sure that we make people whole and that we have as part of the equation funds that are available for those environmental justice questions.”

The presentation given to Democrats on Tuesday also spells out how the Senate’s climate and environmental proposals for reconciliation would mesh with the policies House committees have passed during a marathon series of markups this week.

The CEPP, a clean electricity standard designed to fit the strict budget rules that govern reconciliation, would appear to be mostly the same. The $150 billion program would offer grants to utilities who increase clean power generation by 4 percent each year, according to the document, much like the House proposal advanced by the Energy and Commerce Committee this week (E&E Daily, Sept. 15).

A proposed clean energy accelerator would get $27.5 billion, the same allocation Energy and Commerce gave to what it is calling the “greenhouse gas reduction fund.”

Unsurprisingly, the $320 billion clean energy tax package would be centered on Wyden’s “Clean Energy for America Act.” That’s one of several policy areas where the presentation stipulates that “the House has a different approach and the final policy details are still subject to negotiation between the House, Senate and President.”

Wyden downplayed “differences of opinion” between his proposals and the bill the Ways and Means panel and Chair Richard Neal (D-Mass.) marked up this week (see related story).

“Thus far we’ve had some differences in style and issues, but we can come together,” Wyden said at the E2 event. “We’re rowing in the same direction.”

The Senate plan would also dole out $35 billion for water quality and air pollution cleanup grants in low-income communities, $24 billion for “rural economic development,” $18 billion for coastal resilience, and $20 billion to lower emissions of federal buildings and vehicle fleets. Another $20 billion would go toward energy efficiency rebates.

The presentation also offers some insight into Senate Democrats’ ideas for a Civilian Climate Corps.

It outlines a proposal to put $30 billion into the proposed program to allow “a new, diverse generation of Americans to work conserving our public lands and waters, bolstering community resilience, and advancing environmental justice.”

The investment also would, according to the presentation, prepare “young people for family-sustaining, middle-class union careers.”

As momentum has built behind funding a green jobs placement and training program, proposals for how much money would be needed to build a successful climate corps have varied widely (Greenwire, Sept. 10).

A framework from Rep. Joe Neguse (D-Colo.) and Wyden would put $9 billion toward a “Civilian Conservation Corps.”

But two of Congress’ most high-profile environmental progressives, Rep. Alexandria Ocasio-Cortez (D-N.Y.) and Sen. Ed Markey (D-Mass.), have called for roughly $130 billion for creating a “Civilian Climate Corps” — a name that was embraced by the Biden administration. In its original “Build Back Better” blueprint earlier this year, the administration asked for $10 billion for the endeavor.

The Senate’s proposed $30 billion is more than Biden’s first proposal, but it’s not clear how it would be distributed across various programs and priorities and how the breakdown would compare with that of what the House has proposed.

Across the three House committees — Natural Resources, Agriculture, and Education and Labor — lawmakers have currently set aside roughly $14.3 billion. An additional $35 billion would fund Forest Service projects to aid in watershed protection and wildfire recovery efforts, undertakings that could be executed by Civilian Climate Corps participants.